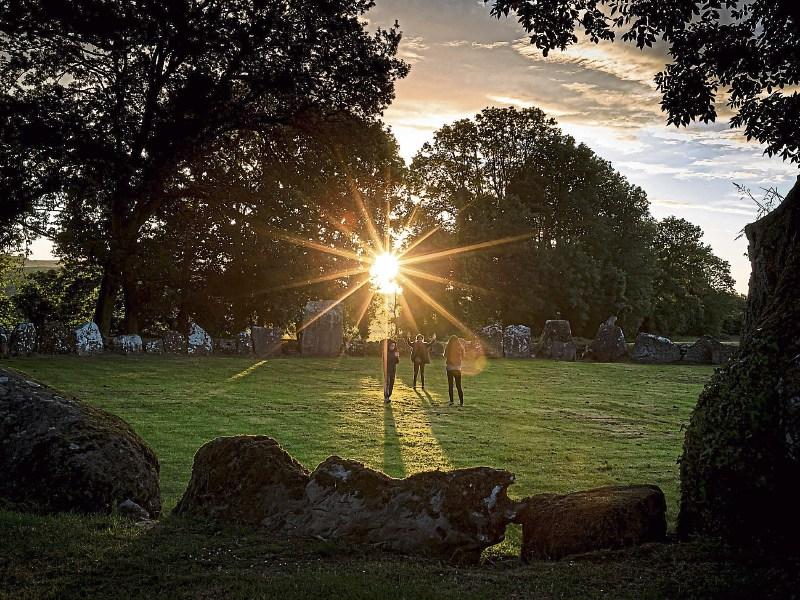 THE stone circle at Grange has been welcoming visitors for over 4,000 years and still retains an air of mystery and calm. On the day we visited, the place was very quiet and only the harsh calls of a hooded crow were there to greet us.

The circle is easy to finds and is located on the main Limerick-Kilmallock road and just 4 km from Bruff. Lough Gur is only 300 meters away.

The information panels are very detailed and give a good introduction to the whole Lough Gur area. While many of the sites displayed could be seen in one tight day, we prefer to take our time and immerse ourselves in the history and wildlife. The information are in several languages including French, German and Spanish and Grange stone circle is internationally famous.

The ground was a bit mucky and wet so we were glad we brought our wellingtons. From the car park the circle does not look that dramatic, as a high bank hides most of the structure. Ancient ash trees are the only things visible and some of these are literally growing out of the stones. It is hard to tell where the stone begins and the tree ends. Ash was a tree that was once venerated and was ascribed with healing properties.

The only other people present were a mother and her daughter. We said a polite hello and kept a respectful distance. Neither of us were in mood for small talk and left each other to concentrate on our own reflections.

The circle consist of 113 stones and many of these are weathered with timeless age. Some of these weigh several tones and the community effort involved to move them into place must have been backbreaking. Modern construction has heavy lifting machines but the builders had nothing but people power. One of the stones is split in half and it would take a very lithe person to squeeze through.

We started to do a lap and passed between two ash trees growing on opposite sides of the bank. Some might see then as guarding but I like to think of them as welcoming people.

The plants on the stones were equalling as interesting. Mosses and colourful lichens have colonised the stones. We also found Navelwort and the young fleshy leaves are edible. Herb robert grows on stone walls and is perfectly at home on the stones in the circle.

While the ash are tall and impressive, other trees have been managed differently. Bonsai blackthorn has been shaped into lollipops and a sycamore tree is a meter high stump. New branches are shooting up but these are pruned back each year. On top of the stump we found masses of witch’s ears. These are fungi that are eared shaped like an ear and a jelly like consistency.

A dunnock starting singing from a nearby bush. These birds have become a lot active over recent weeks.

Ancient locations like grange are always been refashioned and rethought by successive generations. A tree has been decorated with modern Christmas decorations and nearby trinkets have been left on top of a stone as gifts or offerings. There are coins and bits of jewellery and I am fascinated as to what each item, might have meant to the owners. This is the same conundrum with the stones as the meaning behind them has been lost to antiquity.

One item is a dog’s jaw bone with a few teeth. This is closer to one of the original uses. Bodies would have been left in the circle and left till the flesh had disappeared in a process called excarnation.

We returned to the car to the sound of a robin singing. Maybe one thing that connects us to the original builders is that they might also have had an accompanying robin.