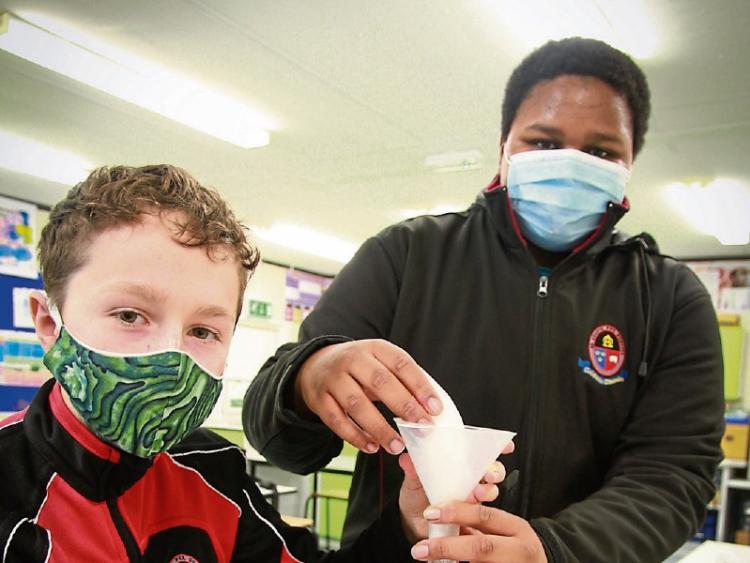 Sean O’Sullivan and Taha Nije carrying out some research

COVID-19 and the re-opening of schools in September is the focus of a project by two students Colaiste Chiarain in Croom.

Second year students Sean O’Sullivan and Taha Nije literally put the cleaning protocols under the microscope and came up with some interesting findings.

“They just came to me and asked were we sure that we were cleaning the desks thoroughly and where exactly were students touching the desks and they wanted to do a study to find that out,” explained science teacher Edel Farrell.

As part of the project they added a substance that glows under ultra violet light to the hand sanitiser and cleaning products used in the school.

This allowed them to go back into classrooms to see where desks were being touched the most and what areas were being cleaned the most.

“The main finding is that the parts of the desk that are touched the most are around the edges and the places that are cleaned most effectively are in the middle,” said Ms Farrell who added that Sean and Taha hope to produce a tutorial video for students and teachers based on their findings.

Sean,14, says their research shows there were a lot of problems with the initial cleaning protocols which made the cleaning “almost redundant”.

Taha, also 14, says they were also able to establish that different cohorts are able to follow the protocols better than others.

“We found how well different genders clean – girls typically clean better than the boys and obviously it varies between the years. For example first years wouldn’t do as good a job as sixth years would or the fourth years,” he explained.