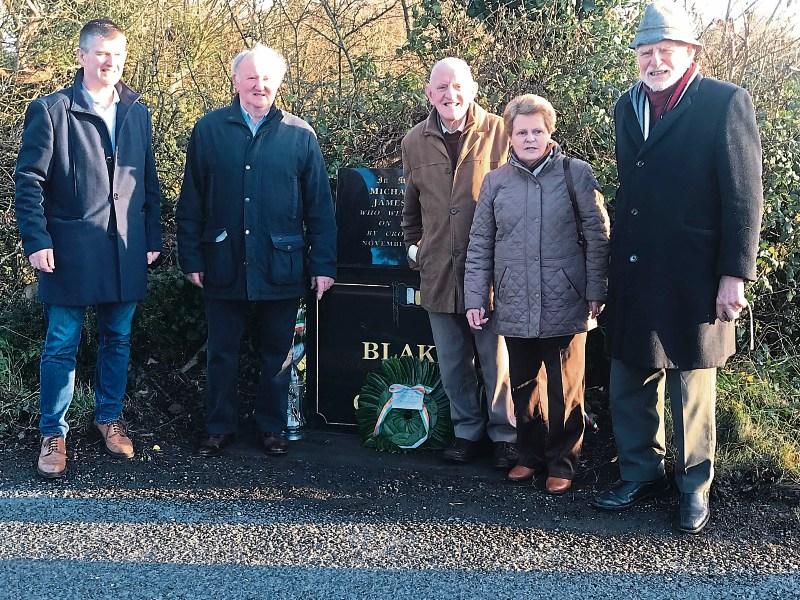 THE TRAGIC events of Bloody Sunday on November 21, 1920, are well documented but what happened in Boher on the evening before, less so.

Local man, Brendan Quirke said it was really a “bloody weekend”, which started twelve hours previously at the Cross of Grange, when two innocent men were murdered by the Black and Tans. These two men, James O’Neill and Michael Blake, were the first victims to die that historic weekend, said Mr Quirke.

The story goes back further to Saturday, July 24 1920, when a draft of 45 Black and Tan recruits arrived in Limerick city from Gormanstown.

“Among the draft were Walter Oakley, Albert Jones and William Jones. While they were making their way up Henry Street they were ambushed by a detachment of IRA men under the command of William Barrett,” said Mr Quirke. All three men were wounded. Oakley died from his injuries on August 2.

Following the shooting of the three Black and Tans, there was great pressure on the police to find those responsible. On August 17 James O'Neill and Patrick Blake were arrested and charged with the murder of Constable Oakley.

Mr Quirke said there was no evidence whatsoever against the men. Neither O’Neill nor Blake had any involvement with the IRA; they had been in the British Army, he said.

This was proven at their trial in Dublin on Friday, November 19. The Blake family returned to Limerick by taxi, while James O’Neill decided on  bus. At Limerick Junction, a yellow car was noticed.

“Both the bus and the taxi were stopped at the permanent road block outside Pallasgreen RIC Barracks and then allowed to continue. Sometime after Pallasgreen, Patrick Blake swapped places with his brother Michael and moved into the middle of the back seat as he was feeling very cold. When the taxi arrived at Grange Cross, a number of men stopped it. There were two cars parked at the side of the road – one was the yellow car observed at Limerick Junction. Two men stepped forward and fired shots into the taxi hitting Michael Blake who was sitting in the seat vacated by his brother, Patrick.

“The bus was also stopped, a number of men boarded and forced James O’Neill to get off. O’Neill was accompanied up the road towards the railway bridge near Grange Cross. A silk scarf was placed over O’Neill’s eyes and he was shot a number of times,” said Mr Quirke.

No one was ever arrested for the killings. As the one hundredth anniversary drew near, Mr Quirke made the decision that a wreath should be laid at the memorial to the two men at Grange Cross in a socially distanced ceremony.

“I would like to say a special word of thanks to local historian, Tom Toomey. Two cousins of Michael Blake, Jack and Des Long, and Patrick MacNamara, a grand nephew of James O’Neill, laid a wreath. I invited local people and some families brought their children. Who knows - some of the children present might still be around in 2120,” said Mr Quirke.