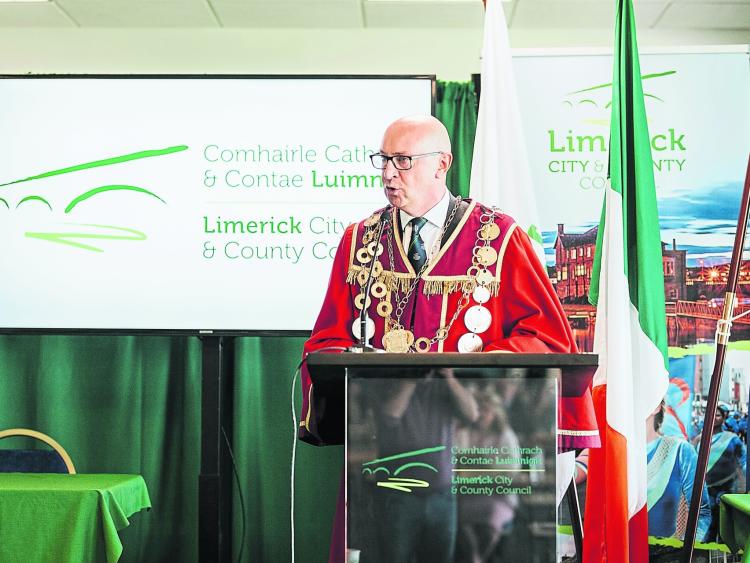 MAYOR Michael Collins has threatened to refer a Limerick councillor to local authority management over comments she made about her colleagues in this month's meeting.

Cllr Elisa O'Donovan, Independent councillor for Limerick City West had said more diversity is needed among the council's membership - and the fact there is not is "to the detraction of people we represent".

Cllr Collins said he was "horrified" by her comments, and demanded she also apologise and retract other remarks she had made on social media.

It's unclear what action, if any, the executive could take, but a number of other members also criticised the first-term councillor for her use of Twitter in particular.

In the early stages of the meeting at the Limerick Racecourse, Cllr O'Donovan spoke on a motion urging the live streaming of council meetings to allow greater access to local democracy.

A briefing document produced by meetings administrator James Clune, signed off on by the Corporate Policy Group (CPG) - effectively the cabinet of the local authority - recommended the proposal be deferred for a year.

Mr Clune argued that the scheme would cost up to €75,000 a year, with a number of other drawbacks highlighted including issues around defamation, "grandstanding" plus "the hacking and editing of content" which could misrepresent members.

He also highlighted the additional cost associated with providing subtitled video archives for the deaf and hard of hearing.

"Having considered the issues as outlined, it appears neither the cost nor the viewership figures in other local authorities currently justifies introducing live streaming of meetings. I recommend this matter is further reviewed in 12 months," Mr Clune said.

After seeing the briefing paper prior to the meeting, Cllr O'Donovan wrote on Twitter: "Very disappointed to see Limerick Council CPG advise against live streaming of council meetings. Their reasons for this are weak and to deny live streaming as it would be required to be accessible to the hearing impaired really is unjustifiable."

The CPG did not make a decision, only a recommendation, with the matter set to be debated on the council floor.

But it was Cllr O’Donovan’s intervention on Twitter which provoked the ire of Mayor Collins.

He said: "The CPG did not decide this. It's inaccurate. Withdraw the statement and remove it from social media. No decision has been made on it."

"I take offence to your attitude. It was an inaccurate statement on social media. You should withdraw the comment that CPG had made the decision. It was discussed, of course it was, but no decision was made," he said.

Cllr O'Donovan said she would withdraw the comment, with Mayor Collins then demanding she issue an apology to the members of the CPG - the chairs of the council's Strategic Policy Committees, and himself.

Fianna Fail councillor Kieran O'Hanlon seized on a comment the former Social Democrat had previously made around the age profile of the membership of the local authority.

"I don't know much about social media, I do not use it. But didn't Elisa O'Donovan put something on social media that all its members are old and grey? I'd want a public apology for that too," he demanded.

Fine Gael's party leader John Sheahan said: "If we politicians use social media, they should do so accurately and responsibly."

He proposed the motion to stream meetings be "frozen in time" until legal advice could be sought around defamation.

Cllr Sheahan acknowledged sometimes in the heat of the moment, members might say things they later regret.

Unlike Dail Eireann, where absolute privilege affords members protection from defamatory proceedings, it is not the case for local councillors whose comments in meetings fall under the less protective qualified privilege law.

Cllr O'Hanlon said: "There is money for worthwhile projects there, but I would not put this to the top of the priority list."

He then returned to his call on his metropolitan district colleague to apologise for her previous comments.

"I apologised to you at the metropolitan meeting about this. But I stand over the comments I have made that we need more diversity in this council and that is to the detraction of the people we represent," said Cllr O'Donovan.

Mayor Collins said: "I'm horrified you have just said that - and I've never said that to anyone before at a meeting. I am going to refer you to our management. It's an insult to this council."

"It's an insult to our electorate too," Cllr Sheahan added.

But Sinn Fein councillor John Costelloe said: "She is entitled to her opinion. I think we are being too sensitive here."

His party colleague, Sharon Benson claimed Cllr O'Donovan was the victim of harsh treatment from other members.

Speaking after the meeting, Green Party councillor Sean Hartigan, who leads his group, said: "I was very uncomfortable when the mayor talked down to Elisa, sanctioned her and repeatedly asked her to withdraw and apologise for her tweet at today’s Limerick Council meeting."

The motion to freeze the matter and await for legal advice was adopted by 28 votes to eight.