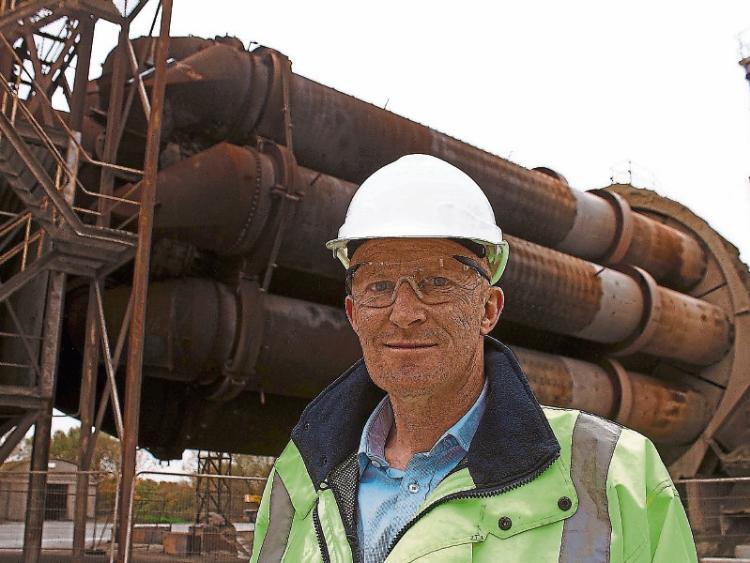 A SENIOR Irish Cement executive says Limerick’s plant is being “left behind”, and needs to “reduce its dependence on imported fossil fuels.”

Brian Gilmore, the firm’s communications director was speaking on day one of a five-day Environmental Protection Agency (EPA) oral hearing into its €10m plans for Mungret.

The company is seeking to replace the use of petroleum coke and other fossil fuels with solid recovered waste, used tyres and other materials.

But the proposals have caused huge controversy, with thousands of people writing to the EPA, in a move which has paved the way for the inquiry, now taking place online.

Mr Gilmore said the reforms are key to ensure the firm maintain its competitiveness, as well as helping society tackle its waste challenges and fulfil its climate obligations.

He pointed out at the national level, the government's climate action plan includes a target for the cement industry to achieve 80% fossil fuel replacement by 2030, and that Irish Cement's reforms at Mungret are also in line with the Southern Region Waste Management Plan.

"Limerick is now the only cement factory in Ireland to be totally dependent on imported fossil fuels. Sod in a very real sense, the Limerick cement factory is getting left behind. The proposed activity is essential to secure a future for the factory and allow it to play its part in meeting the 2030 target set out in the government's Climate Action Plan," he told the oral hearing.

In his witness statement to the proceedings, Seamus Breen, the head of quality and sustainability for Irish Cement, pointed out that the application to change process at Irish Cement Limerick will see a reduction in carbon dioxide emissions.

"The application for authorisation of the proposed activity – namely, to use alternative fuels and raw materials – is consistent with environmental policy on the basis that the environmental and sustainability benefits of this project will include a reduction in CO2 emissions from the cement factory and less reliance on the use of fossil fuels. The reduction in CO2 will be achieved through the replacement of fossil fuels with alternative fuels that have a lower carbon intensity. In simple terms, less carbon dioxide is emitted during the combustion of alternative fuels in comparison to fossil fuels," he told the hearing.

"The environmental and sustainability benefits of this project will include a marked reduction in CO2 emissions from the factory as outlined in this submission. This will be achieved by using alternative fuels at the expense of fossil fuels in the production of clinker, thereby reducing the dependence on imported fossil fuels," he added.

He also played down the dust emissions which have allegedly emanated from the Irish Cement factory, something which has been a source of conflict with local residents' groups.

Mr Breen pointed out there have been three dust emissions from the site - the most recent in 2017, and acknowledged that the firm had been prosecuted and fined in the district court.

He added: "Irish Cement is on record as having apologised and expressed regret for these incidents. Irish Cement works to continually improve its environmental performance above and beyond its licence obligations so as not to have an off-site impact on its neighbours".

He said a "root and branch" analysis of activities which may contribute to dust emissions has taken place over the last three years.

In further testimony for Irish Cement, Thomas Burns, a partner in Brady Shipman Martin, environmental planning and landscape consultants, pointed out the firm's sister plant in Platin, Co Meath, has been using the alternative fuels since 2016.

Four schools are located close to Irish Cement Limerick, with another due to be constructed in the Mungret area.

A key argument in groups opposed to Irish Cement's plans, Mr Burns said the firm's proposals "will have no direct or indirect adverse impact on the environment".

"Any future licence will continue to be subject to conditions to ensure that there is no adverse impact on human health or the environment," he said.

Ecologist Matthew Hague told the hearing that in terms of the local environment, Irish Cement’s plans will bring “no adverse effects” to special conservation areas within a large radius of the Mungret plant.

This point was challenged by solicitor Michelle Hayes in questions at the end of the day – and she will also give evidence to the hearing tomorrow.

Mr Hague pointed out Irish Cement’s Natura Impact Statement addressed any concerns the EPA had in its initial grant of permission – before the project was appealed.

“No reasonable scientific doubt remains as to the absence of adverse effects on the integrity of those European sites at the Lower River Shannon Special Area of Conservation,” he said.

A concern of those opposed to Irish Cement’s plans is an increase in dioxins into the local environment.

However, engineer Dr Don Menzies outlined a study he had carried out using a hypothetical example of a farmer who only consumed items from his land, near the Irish Cement factory.

Dr Martin Hogan said there would be “significant reductions in carbon dioxide emissions” with the use of alternative fuels, as opposed to traditional fossil fuels.

“These reductions are real and will make a positive contribution to efforts to reduce emissions that would otherwise occur. Since climate change is undoubtedly an adverse process for human health, any reductions in emissions, even if small on a global scale are welcome, and will have a positive effect on human health,” he said.

Air monitoring expert Sinead Whyte, of Arup, also pointed out that carbon dioxide emissions from Irish Cement’s sister plant in Meath, had seen a consistent drop between 2010 and 2017.

In Limerick, she said it’s projected that the switch to alternative fuels will bring about a saving of 58,500 per year.

Securing an operational licence from the EPA is the final hurdle Irish Cement has to clear in order to change its process in Mungret, after the firm got planning permission after an An Bord Pleanala oral hearing.

Tomorrow, opponents to the company’s plans will begin three days of presentations.