Siege of Jadotville: Daughter of Limerick man, who fought in the Congo, shares his remarkable story 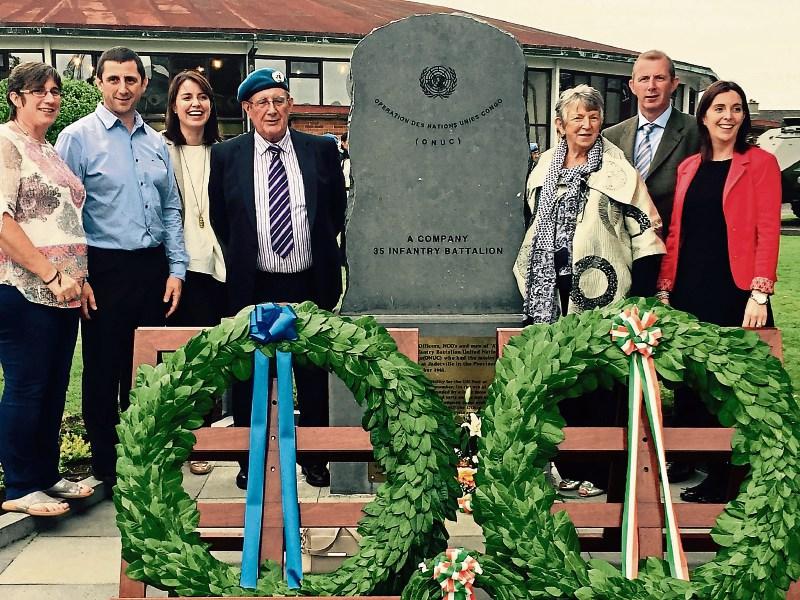 Maria, Diarmuid, Helena, Tadhg, Kathleen, Donal Quinn and Caitriona Cody at Custume Barracks in Athlone on the 55th anniversary when the men were recognised with a Unit Citation

Last week we learned that an expert group, consisting of ex-military officers, a historian and an academic was set up to examine the issue of medals for Galantry for soldiers in the Siege of Jadotville in 1961.

The Siege of Jadotville which took place in the Congo in September 1961 found a place in the national psyche in 2016 after the Netflix release of the movie of the same name starring Jamie Dornan.

During the siege, 155 Irish peacekeepers, with no battle experience, held out for five days against more than 3,000 heavily armed mercenaries and local militias and one Fouga fighter jet which repeatedly strafed the position of the Irish troops from the air.

“A” Company did not suffer a single fatality while they inflicted 300 fatalities and 750 injuries on the other side.

Col. Quinlan was a gifted tactician and a leader enormously respected by his men. The tactics employed by the Irish soldiers are now studied as an exemplar of defence techniques in military colleges around the world. There is no doubt about the military excellence of “A” Company.

However, for years after the battle Col. Quinlan and his men were derided in Ireland because, having run out of food, water and ammunition and with no hope of the arrival of reinforcements, and having negotiated an acceptable ceasefire agreement (which the enemy did not honour) they became prisoners of war for six weeks. They were branded “Jadotville Jacks”, meaning cowards.

Each soldier of “A” Company fought the real battle after returning from Jadotville. The army turned their backs on them, they fought depression and post-traumatic stress disorder.

Several died by suicide, drug abuse or alcoholism. There are too many stories of broken families. In my journey of learning my father’s story, I have been so saddened and deeply affected to hear the stories of the men for whom the battle was just too hard.

For example, a young man in my fathers’ mortar crew was just 16 at the time. After Jadotville, he went to Australia to try to escape his demons and later took his own life. That young man deserved better than that. That family deserved better.

These men and many who died in later years did not live long enough to receive the Unit Citation or the Bonn Jadotville which accompanied that Unit Citation. They never saw the acknowledgement that came 56 years too late.

After the Siege of Jadotville, 33 men were recommended for medals by Col. Quinlan on their return to Ireland.

Commandant Leo Quinlan, son of Col. Quinlan has fought for many years to have these medals awarded to the eight men still living and posthumously to the families of those who have passed away.

He and others such as the late Captain Liam Donnelly, John Gorman and Declan Power, have fought for these men to have the recognition they deserved. Of the five men recommended for the MMG (Medal for Military Gallantry), my father is the only surviving soldier.

My father, Cpl. Tadhg Quinn, hailing from Port in Abbeyfeale is one of the five men who were recommended for the two highest military honours; the MMG and DSM (Distinguished Service Medal).

Isn’t that amazing? An 18-year-old young fella from Abbeyfeale went to Africa, experienced something most of us couldn’t even imagine and came back having given such a good account of himself that his commanding officer felt it appropriate to recommend him for the two highest military honours.

In Jadotville, dad commanded a mortar crew. He had a number of mortars for which he was responsible and a crew of men who were dug into positions in the town of Jadotville and whose job it was to “neutralise” long-range targets up to a mile away.

Knowing my dad, he was perfectly matched to this task. He has an uncanny ability to predict distances and eagle-like long distance vision.

In the movie, dad is seen calling ranges to target a convoy of trucks which were supplying the attackers with ammunition and reinforcements. The normal procedure would have been to send a smoke shell first to check the range before sending a live shell. Dad recalls not having time to send a smoke shell and having to quickly estimate the range and instruct his men.

It was a direct hit.

We can only imagine what the butterfly effect of that one action, that decision taken in the heat of the moment with no time for doubt or hesitation, was.

What would have happened if those reinforcements and ammunitions had made it to the attackers?

How many young Irish lives might have been lost?

This example is just to give you a sense of what my father did but he was amongst 155 heroes so he was in good company.

When the siege ended, dad was taken into captivity along with his comrades. He recounts the first night of captivity being worse than the days that came before it because he had no weapon, no way of protecting himself, no understanding of what was going to come next, knowing he and his comrades were pawns in a game that was being played out in Dublin, New York and Leopoldville (now Kinshasa).

To give you a sense of the level at which this episode in United Nations history was played out, the UN Secretary General Dag Hammarskjöld flew to the Congo to hold talks to try to negotiate a ceasefire between the United Nations operation in the Congo and the Katangese troops.

His plane was shot down over what is now Zambia and he perished in the crash. It is generally accepted that Hammersköld was murdered by the Katangese. When asked about Hammersköld, JFKs response was: “I realise now that in comparison to him, I am a small man. He was the greatest statesman of our century”.

Eventually, terms were agreed and the men were released in late October. They were immediately re-armed and were sent straight back into action.

The Company returned to Ireland in stages from the end of November until late December 1961. “A” Company was in continuous combat in the famous “Tunnel” in Elizabethville (now Lubumbashi) right up to the date of repatriation home and dad was in the thick of this all the time before he took the last flight home arriving on Christmas Eve.

He arrived home to his parents on that winter’s morning and drank a whiskey with his grandfather. He speaks about the difficulty adjusting to life in Abbeyfeale.

He cut quite a dash at mass on Christmas morning. Everyone knew who he was, of course at that time the whole community were wracked with worry for the young man from Port who was “captured” in the Congo and very relieved to have him home safely.

A local man told me years later about how, as a boy much younger than dad, he remembered that Christmas morning Mass. He was awestruck by dad and thought he was a hero.

Dad recalls that morning mass very differently, wrought with anxiety and feeling completely dislocated. He had been through something that he didn’t have the tools to come to terms with and the local boys just wanted to know how many people he had killed.

Finding it almost impossible to adjust, dad returned to barracks and was redeployed to the Congo in 1962.

As it happened, he was hospitalised with tonsillitis just before deployment so he had to wait until the next deployment some months later before he returned to the Congo for his second tour of duty. But he returned…

Fast forward many years, and my mother, my siblings and I are learning the story of our family.

Dad never spoke about Jadotville until after the death of his mother in 2002. It was locked up in the family secrets box and left there until at the age of 60, he was able to peek inside the box again. He let us have a look inside too and we have all embarked on this journey together.

Learning our family story has helped us make sense of so much in our own lives.

Our dad, now 77, was one of the lucky ones; he didn’t look for comfort at the bottom of a bottle of whiskey, the demons didn’t win and drive him to suicide as happened with too many other men of “A” Company.

Seeing the men of “A” Company finally being recognised and commended as a unit has meant more to all of us than I could ever articulate in words.

Every girl thinks that their daddy is a hero but there are medals, monuments and citations to prove that mine really is. For my father, it was acknowledgement at last.

Jadotville is dad’s story but, in a way, it is our story too. Whether or not they are ever awarded, the medals for which my dad was recommended are an important part of our family story and our family history.

There is so much to learn from our story and the story of the young fella from Abbeyfeale, the importance of raising our heads high and acknowledging the good work of our armed forces, the understanding of mental health and post-traumatic stress disorder in our acting military and veterans, the impact of that on veterans’ families.

So many families have had to take the thorny path. We just happen to be one of the lucky families.