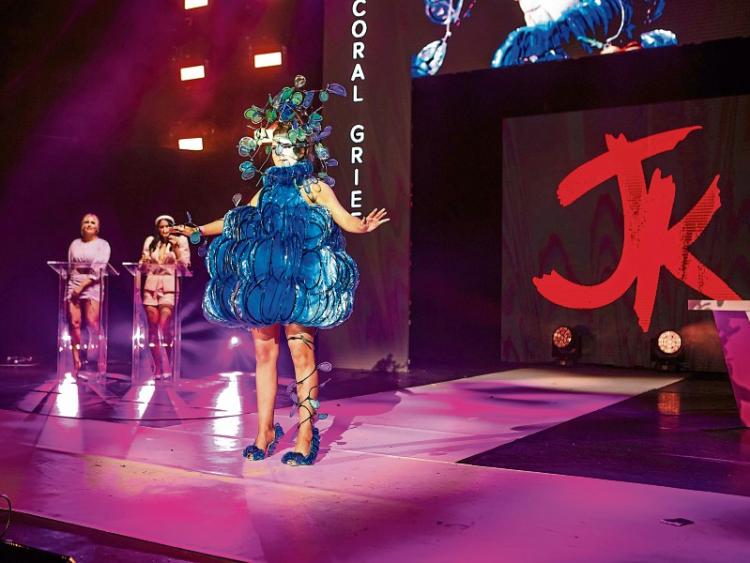 Ooh Kouture: Students from Coláiste Nano Nagle on Sexton Street in the city teamed up to create this eye-catching design

WE may be in the midst of a global pandemic but that hasn't stopped Limerick's teenagers from getting their hands ‘dirty’ in preparation of the Junk Kouture finals.

Junk Kouture is a sustainable fashion competition that annually showcases aspiring designers aged from 12 to 18 from across Ireland as they rise to the challenge to envision, design, create and model wearable fashion styled from household rubbish and upcycled tat. The golden rule is that everything used must be 100% recycled.

Coláiste Iósaef in Kilmallock and Coláiste Nano Nagle on Sexton Street in Limerick city have two groupings each competing in the Junk Kouture final in December.

Junk Kouture 2020 was sadly disrupted by the outbreak of Covid-19 in Ireland and the grand final in the 3Arena was postponed in April.

Coláiste Iósaef students Kevin Sheedy and Dean Casey from Kilmallock teamed up with Patrick Finn from Bruff to create Laochra Gael. Their idea pays homage to the Limerick hurling team’s All-Ireland triumph in 2018 and aims to tackle childhood obesity.

“As well as having hurling part of our theme we wanted to have the idea of fighting childhood obesity. With these two ideas we came up with a warrior hurler. The warrior side of our design is the fight of obesity, while the hurling part is inspired by the Limerick All-Ireland winners,” Kevin said.

The trio spent the guts of seven months on their idea. “We started from as early as September and we just about finished it for the deadline in March,” Patrick said.

The brains behind the Laochra Gael design are happy that the final is still going ahead.

“Ideally it would be a lot better to have the finals like they used to be previously but in the current situation that’s not possible but we're still thankful that the final is still on and it’s not just all over without a final,” Dean added.

Fellow Coláiste Iósaef students Cara Davern from Bruff and Clara Lynch and Hannah Brady from Athlacca teamed up to create Coral Grief. “Our dress also represents how ocean pollution is killing coral reefs, leading to the name Coral Grief. Our dress is made from the recycled materials from our new school building. The blue colour of the plastic inspired our look,” Cara said.

The trio started their design when they returned to school in September last year.

“It took us about six months to make the dress. We started the minute we went back to school in September and we were working on it all the way up to the regional finals in March. It took a lot of time and effort but it was really fun and we loved doing it,” Clara said.

Their Junk Kouture design was inspired by Karl Lagerfeld’s spring collection in 2018. “The fabric manipulation and silhouettes from his collection helped us come up with the details of the outfit and we also made it our mission to include volume in this outfit. Balenciaga inspired our broad shoulder piece,” they said.

The trio flirted with their design for a number of months until they were all happy with the finished product.

“We had many designs sketched and in each one we liked a different aspect of the outfits. In the end we ended up putting the pieces together and came up with our design.

“Some of the details in the finished product were not planned but were more touch ups, they were needed in the design so we constructed and changed the outfit until we were all happy,” they added.

“Our main source of inspiration comes from the House of Balmain. We wanted to create an industrial high end fashion look. The outfit promotes sustainability as we believe waste materials such as tyres should be repurposed to reduce pollution, so our world will not fade,” they said.

For Generation Fade it took the girls four months to design, source materials and to put the dress together.

They are eagerly waiting for the final on RTÉ Player live in December.

“We were disappointed a few months ago when we found out that the Junk Kouture finals were cancelled but now that the finals are going ahead in December we are so excited to show off our outfit on stage,” they concluded.

TV talent show judge and Junk Kouture judge Louis Walsh said: “I was so disappointed when the Grand Final of Junk Kouture was cancelled in April. We have had a tough six months and we all need good news right now.

“All of you future designers will have the opportunity to strut your stuff on the catwalk and own that stage. It will be different but equally dramatic as your performance will be captured on film for the new Digital Final broadcast.”