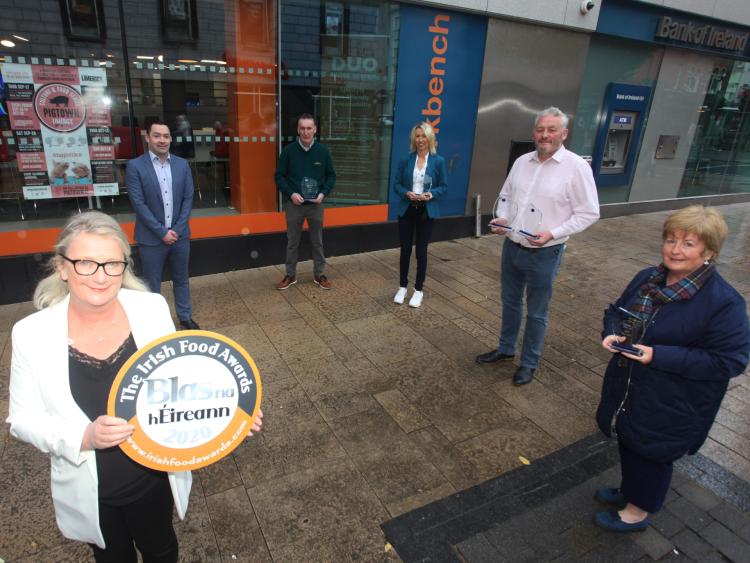 Glenstal Foods Ltd, Murroe; Kearney's Home Baking Ltd from Ballyhahill; Murphy’s Home Bakery from Abbeyfeale and the Old Irish Creamery based in Effin were all in the winners’ enclosure.

Of these, Kearney's Home Baking Ltd. won the best in county.

Sadly, the winners were not able to travel to Dingle this year due to Covid-19 restrictions, so they learnt of their win online.​

But staff at the Bank of Ireland’s branch in 125 O’Connell Street were on hand this Tuesday to present their trophies.

While staff from Murphy’s Home Bakery could not make the presentation, the others were joined by another local winner, Kathy McAndrew-Wallace of Bramble Cottage in Clonlara, who won her maiden blas award.

Now in their 13th year, the awards recognise the very best Irish food and drink products, and are led by a blind tasting of produce across the country.

The award is considered to be as the Oscars of the Irish food industry.

Tom O’Connell, Glenstal Foods, which supplies butter and cheese to retailers, as well as customers across Europe and North America, says he is a “veteran” of Blas awards, having scooped many awards in recent years, including the Supreme Champion title back in 2017.

There was another award for James O’Doherty of the Old Irish Creamery in Effin.

He took gold for new a cheddar product the firm brought out this year.

It’s something Maura Kearney, who founded the firm with her sister Siobhan in 1992, is very proud of.​

“Getting a gold is like something to celebrate really. It's like getting the holy grail, and we are very proud of it. It's good recognition, and it's great for our team back at base. They are the ones putting in the work, and they are the ones making the bread each day. It's a great boost for them, and our sales. People do follow the Blas na HEireann trademark as a standard. Even to be in the final for any company is a great boost,” she said.

“It means a lot. It's one thing to have for your friends and family to tell you you've a nice product. But when you enter something like this and you get the recognition, you know you've a good product then. There's always great feedback on the spiced beetroot relish. I was delighted, absolutely delighted. I knew I was finalist, but you're up against a load of very established businesses. I was up against a load of stiff competition, so I was delighted to win it,” she said.

Products from every county in Ireland were entered into this year’s competition to win gold, silver or bronze Blas na hÉireann awards in over 140 food and drink categories, as well as key awards like supreme champion and best artisan producer.