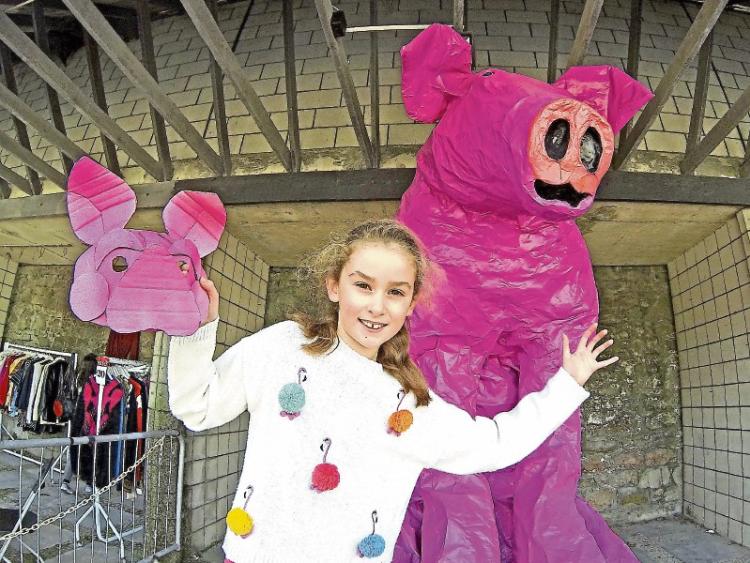 A MUCH more fun and colourful type of face covering was on display at the Lumen Street Theatre mask making demonstration in the Potato Market on Saturday.

A giant pink piggy also visited the open air market on Merchant’s Quay. And he/she went down a storm with children and their mums and dads.

It was all part of the Pigtown Festival.

Cllr Olivia O'Sullivan, of Limerick Food Group who organise the festival, tweeted that it was “socially distant, outdoor fun and plenty of ‘ham sanitizing’ as our smallest calls it”.

Limerick Food Group is a voluntary non-profit group from industry working together to promote Limerick food. The festival was inspired by the four bacon factories operating at the heart of the city – O’Mara’s, Matterson’s, Denny’s and Shaw’s (later Clover meats). The pig played a vital role in Limerick’s economic and social life.

The factories built an international reputation for Limerick ham and bacon and provided employment for thousands of families linking the city and the surrounding county in the production of bacon products.

Pigtown has been running since 2017 and despite Covid-19 they have managed to keep it going in 2020. The festival opened with the Pigtown dinner at the Mustard Seed restaurant in Ballingarry last Thursday. There are many more dining events planned in the coming days and weeks.

For the duration of Sept & Oct our friends @PigtownLimerick will have their Pig float at the Milk Market Fri Sat Sun until 3pm to call in say hi and get your very own pigture with him #LimerickMilkMarket #Pigtownlimerick #LimerickEdgeEmbrace #Limerick pic.twitter.com/wXouPLdTuu

See pigtown.ie for more on dates and venues.