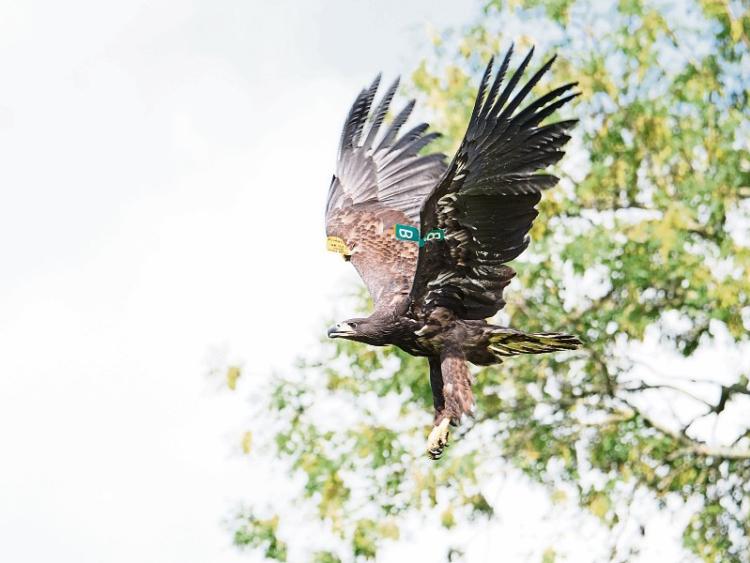 ‘Spectacular’ is the word used by Dr Allan Mee, Ballyorgan, to describe the white-tailed eagle

TWO LIMERICK men are behind the release of four Norwegian white-tailed eagles along the Shannon Estuary.

The project is managed by Castleconnell’s Eamonn Meskell, of the National Parks and Wildlife Service, and Ballyorgan man Dr Allan Mee, of the Golden Eagle Trust.

Four Norwegian white-tailed eagles have already been released on Lough Derg with another two birds to be released there later this month.

While, Dr Mee told the Leader four eagles will be released on the Shannon Estuary.

This is not being done on “a wing and a prayer”. The site has been carefully chosen and the weather conditions have to be right to let them spread their wings.

“You need a decent wind. It has been unusually warm and very calm with very little wind,” said Dr Mee. Secondly, to quote an estate agent it is “location, location, location”. The Shannon Estuary fits the bill perfectly.

“Killarney and Lough Derg are freshwater lakes. We wanted to release them in a more marine environment but they need trees to nest in and cover for the release as well. It took a bit of finding but we found a nice spot along the Shannon Estuary” said Dr Mee.

The Ballyorgan man said it would be impossible to release the eagles without co-operation of local farmers.

“I have to praise the farmers. Obviously you have to release them on someone’s land. They have been very accommodating. I spoke to Limerick IFA chairman Shay Galvin and it has all been very positive.

“I think things have changed from when birds were first released. There was a lot of fear and trepidation about what the birds might do. Now people are more relaxed. They are not doing any harm, feeding on fish. They are spectacular birds,” said Dr Mee.

More good news is that the first home grown Irish bred white-tailed eagle, a female bred in Clare in 2015, has produced her own chicks and reared them successfully with a Norwegian male.

“This is a hugely important milestone for the project and, we hope, the first of many of a new generation of Irish bred chicks to Irish parents. In addition, the release of young eagles on Lough Derg and the Shannon Estuary will be critical in helping bolster the existing population and form the basis of a viable self-sustaining Irish population.

“The signs are good that we can achieve this with 10 or more pairs likely to breed annually over the next few years. Eagles are now nesting again in some of our most iconic scenic and cultural landscapes such as near Holy Island on Lough Derg, Killarney lakes, Connemara, Glengarriff and on the western tip of the Iveragh peninsula in Kerry, where they would have nested in historical times, perhaps even on the same islands used back in the 18th and 19th centuries. It’s wonderful to see these birds back where they belong,” he said.