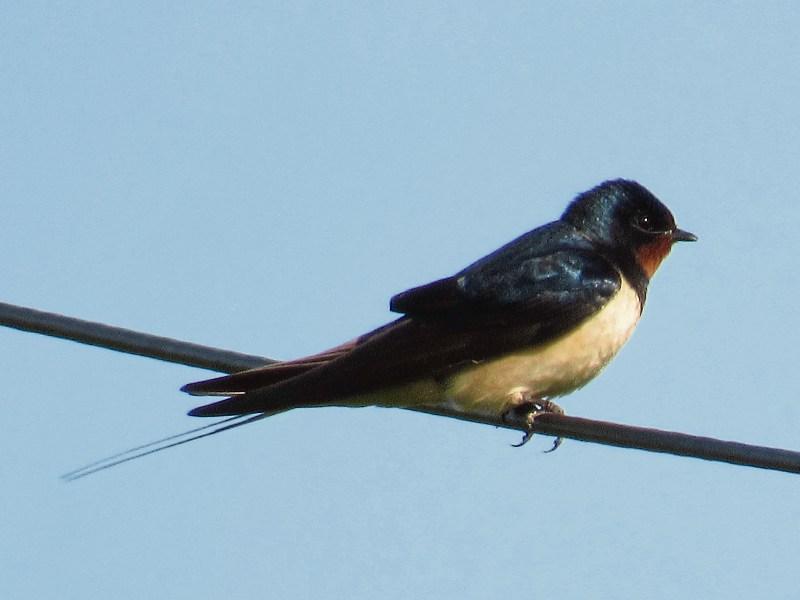 After a day bending the body in the garden, I needed a walk to stretch out. The evening was thankfully dry and refreshingly windy, as the last few days had been very close. With autumn nearly officially here not only are the days shortening, but the light intensity is diminishing.

This is noticeable when walking after six and it is important to wear a high Vis jackets, so as to be visible to the increasing traffic.

The local farmer has his cows out and they are under the watchful eye of a massive and fierce bull. Every time we walk by he comes up to the edge of the hedge and bellows loudly. The few hawthorn trees with bramble seems like scant protection and the electric wire appears to have no effect on his bulk.

While he doesn’t appear to be enamoured with us two legged creatures, he is far more tolerant of the tiny swallows. These swoop above his head catching insects and gracing the last few days of summer with their presence. Swallows are always on the lookout for an easy meal and cows obliging disturb plenty as they graze on the grass.

Last week from the sitting room of my mum’s house, we watched a small gathering of swallows perched on the electricity wire. They had the look of travel about them and these small families will merge with their neighbours and soon swell to thousands, ready for the long journey back to Africa.

The swallows in my shed did struggle to raise a brood this summer, as drought followed by persistent rain created two extremes that made insect populations unstable. This is just one of the effects of our changing weather that is becoming more unpredictable and the effects on wildlife is evident.

My kids used to love the “The Happy Prince” written by Oscar Wilde. A Swallow does most migrate because the statue of the happy prince in the middle of town, asks him to help the poor by stripping of his gold and jewels. The swallow stays and helps many needy people but eventually cold and hungry catches up with him and he dies.

We have also noticed other species of birds in small family’s gatherings. Hooded crows usually no more than five, are in the recently cut fields. While the rooks and jackdaws move on after a few days, the greys linger perhaps enticed by homeless small animals. Later in the winter I often see flocks of over a hundred and they gather in places where they is a good supply of food.

On our walks we have been gathering foxglove seeds. These biennials put out leaves in the first year followed by tall purple spikes the following summer. Occasionally they can be white but I have had no success yet, growing this colour from seed. The seed is like dust and we simply cut of the seed head and shake over the area where we want them to establish.

Sharing is in a gardener’s nature and I have a few envelopes full of wildflowers that I sometimes give to people who are developing a wildlife garden.