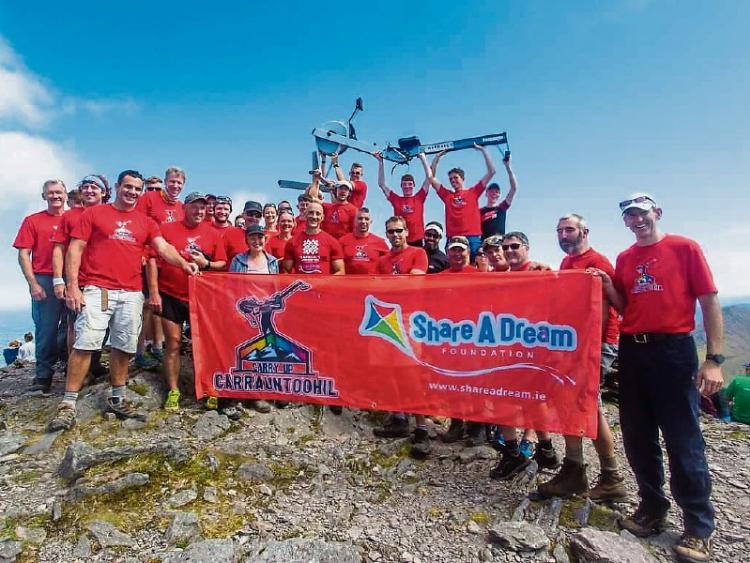 ALMOST €40,000 has been raised for the Share a Dream Foundation by a member of An Garda Síochána who ‘rowed’ more than 10,000 metres at the top of Carrauntoohil, County Kerry at the weekend.

Garda Ken McDonald, who is originally from Limerick city,  received huge support as he carried a 26kg rowing machine to the summit where he completed the challenge on Saturday morning.

“It took us about two and-a-half hours to get to the summit and then after the row, which took 43 minutes, we got back eventually to Cronin’s Yard (at the base) and that was every emotional because Shay’s (Kinsella)  family were there to cheer us over the line,” said Ken who was also supported by the Garda Commissioner Drew Harris on the day.

Garda McDonald, who is currently stationed in Birr, County Offaly, had revised his initially target for the event to €25,000 because of the Covid-19 pandemic.

However, he said he is thrilled to have surpassed that figure and hopes all of the money raised will go to good use.

“I have had fantastic support – from friends, colleagues and family and from people I had never met,” he told the Limerick Leader.

Most of the money raised at the weekend will be used to repair the Share a Dream facility in Castletroy which was damaged in a burglary earlier this year.

“Any money over the €30,000 will go straight into making more dreams come true and I am delighted that I can play a small part in continuing on Shay’s dream of making dreams come true,” he said.

Ken, who broke a rowing speed record at the Shannon Rowing Club last year, said he was moved to do the challenge after the mini garda station he helped build at the Share a Dream centre was targeted by thieves.

He had played a major role in helping to build the garda station where children can role play and act out the job of a garda in a safe environment.

To donate, go to www.idonate.ie/KennethMcDonald