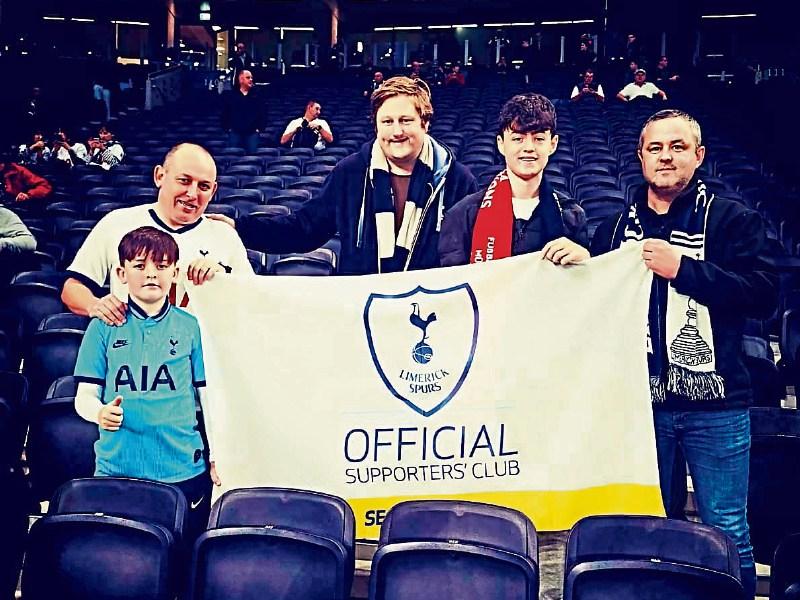 A SUPPORTERS club following one of the English Premier League’s top soccer sides has teamed up with a mental health group in Limerick.​

The Limerick Spurs supporters club, who follow London football team Tottenham Hotspur, have agreed to link up with the Limerick Mental Health Association for the coming season.

The idea of the club’s chairman Paddy Hartnett, supporters group members will proudly display the Mental Health Association’s logo on its new shirts, and carry out fundraisers.

Founded in 2002 by a group of community leaders, the Limerick Mental Health Association exists to promote positive mental health across the city and county.

Based in Sexton Street, the association created and oversees the work of the Le Chéile peer support project, which holds regular activity days and coffee mornings to support those who might be struggling emotionally.

Speaking to the Limerick Leader, chairman Paddy Hartnett said: “I’m a big advocate of mental health. There are very few people I know who would not have been touched by mental health themselves, or affected by someone else in the family in connection to death by suicide.”

He had thought of a few different organisations to link with, but given how suicide has impacted so many people here in Limerick, he felt the Mental Health Association was the best fit.

“The more I thought of it, with people locked down and not working, a lot of people’s mental health would be impacted. This was the golden opportunity to get some kind of partnership going,” Paddy added.

Paddy hopes with soccer being one of the most watched sports in the world, it will open the work that the Mental Health Association does to other people.

“I’m trying to use Limerick/Spurs as an avenue to get this out to other people. If people need to talk, there are always services there. And I’m always here to talk if anyone wants to ring,” he added.

Claire Flynn, project manager of the Limerick Mental Health Association said: “When people can come together to support a team they all love together, it creates a feeling of camaraderie and community. That’s so important. For some people, it may be hard to get involved in groups. But a love of soccer, a love of a team sport, and the love of a team can really bring people together.”

The Limerick Spurs supporters club is one of the more active among the North London side’s army of fan organisations.

Last year, it made Ella Markham, who was cruelly bullied online by trolls, an honorary member.

In normal times, they would meet up to watch games in the Still House Bar in Thomas Street, although with lockdown, this has not been possible.

The group arranges a number of visits to the Tottenham Hotspur Stadium each season.​