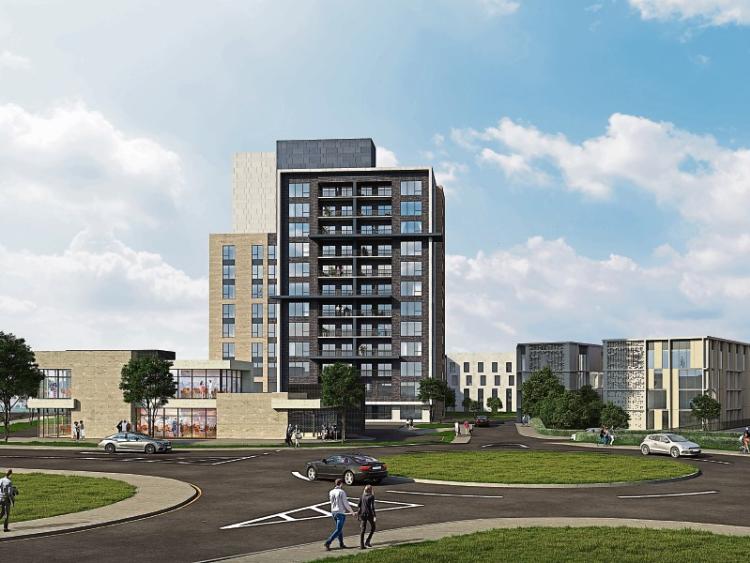 A drawing of the proposed development

THE €60m Parkway Valley development will have office space for up to 1,000 people,  developers have said.

Hundreds of building jobs look set to be created, as well as at least 100 direct jobs as part of the ambitious plan green-lit by council.

It will feature 245 bedrooms across a range of blocks ranging in height from three to 14 storeys.

Of these, the plans provide for 122 duplex units and 123 apartments. Some 76 one-bed units are planned, 127 two-bed units, and 42 three-bed units. Four office blocks are in the plan, over basement parking.

Four office blocks are in the plan, over basement parking, providing 12,262 square metres.

There’ll also be a creche, a multi-use games area and a public park.

“On completion, this development will create upwards of 100 jobs directly and, subject to successful leasing, the proposed office complex could also accommodate up to 1,000 staff. The combination of investment expenditure, commercial activity and the creation of a vibrant new local community is expected to have a significant positive impact on the local economy,” he said in a statement to this newspaper.

It’s all a far cry from plans for the site at the height of the Celtic Tiger period in Ireland.

It would have seen Marks and Spencer open its first Limerick store. Instead, the British retailer is focusing its attentions on the city, after its Parkway plans were allowed, but only subject to very strict time conditions.

Shells of buildings had dominated the site since the onset of the economic meltdown as ownership of the site passed between parties. It’s only been in the last few months these were cleared from the site.

This came after a derelict notice order was slapped on the developer by Limerick City and County Council.​

Welcoming the granting of permission, Cllr Sarah Kiely said: “The office blocks will bring a lot of employment, as well as a creche and a hotel. Obviously, these will all bring employment. The location is perfect when it comes to a multi-use residential site. I think it will be great for the area. It won’t damage the city centre at all – I feel it will be positive for the centre.”