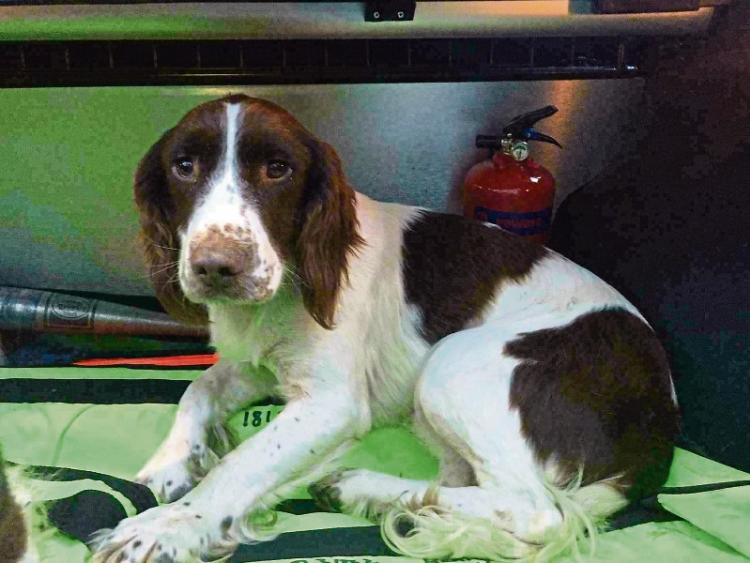 THE demand for dogs of all breeds and ages has soared as more people are working from home during the Covid-19 pandemic. The added interest in animals is fuelling backyard breeders, puppy farmers and dog thieves for this new criminal underworld.

Gardaí are appealing to the public to take extra crime prevention measures when it comes to caring for your pet, particularly high-value breeds of dogs.

There is a huge demand for springer and cocker spaniels at the moment. But it is important to highlight that NO breed and NO age of dog is safe.

Shortly after 7.30pm on July 13, Gardaí from Castleconnell Garda Station were following up on reports of suspicious activity in the car park on Old Dublin Road, Limerick.

Gardaí spoke to two men who had two male springer spaniel dogs in their possession. When Gardaí enquired about their ownership of the dogs, the two men were unable to provide information that Gardaí were satisfied with. They also informed Gardaí that the dogs were microchipped.

One of the men later attended Henry Street and produced documentation which Gardaí believe are fraudulent. The two dogs were then brought to a local animal shelter while Gardaì carried out further enquiries.

One of the dogs, the older of the two, has since been reunited with its owner. The dog is believed to have been stolen on June 24 i n Co. Cork.

The owner had placed adverts online and posters around his area in an attempt to get back his pet. Gardaí brought "Jake” out to the owners home and were satisfied with the owner’s description of the dog and its excitement, awareness of his surrounding, and location of his kennel.

Jake's owner, Gerard said: "I'm absolutely thrilled to get Jake back. I had lost hope cause he was gone for so long. I tried everything to get him back – I tried social media and put up posters locally. I am extremely grateful to Garda Shane Hayes and Limerick Animal Welfare for looking after Jake and getting him home safely.”

Gardaí are still attempting to reunite the second dog with its owner and are appealing to anyone who can help get him home. Anyone with information should contact Henry Street Garda Station on 061-212400.

Sgt Ber Leetch outlines some precautions that dog owners must adhere to in order to keep your dogs safe:

"To keep your dog safe you must get your dog micro chipped and have your phone number printed on a tag on the dogs collar.Thieves can take advantage of an unsupervised dog left out in the garden,so be sure to keep an eye on them at all times.

Be wary of strangers who ask for personal information about your dog. Don’t leave your dog tied up outside of a shop or other public spaces, it’s safer to leave your dog at home. Gardai never recommend leaving your dog in the car, the rising temperatures are one risk, but they could make a tempting target to a thief." Sgt Leetch said.

Marion Fitzgibbon is the Director of Limerick Animal Welfare and urges the public to microchip their furry friends.

"It's so important to microchip your dog to have the best chance to track them down if they do get stolen.

All you have to do is browse DoneDeal to see the high fees that people are charging during the pandemic." she said.

Not only for the spike in illegal and cruel breeding practices. But also concerns about what will happen to many of these puppies and dogs when people return to work and the novelty wears off.

"People need to stop buying. There is plenty of loving and healthy dogs available in animal rescues and shelters.

I know lots of dog owners, and older people in particular that don't use social media but read newspapers may not be aware of what's going on in order to be hyper vigilant with their dogs at the moment. And just think its important to get that message out there, ” worried dog owner Katie Hourigan said.

The following pet safety advice is issued by the National Crime Prevention Unit:

Pets should be microchipped so they can be easily identified if found.

Be wary of anyone that starts asking for personal information, if you notice a stranger watching you or your dog, or if you see someone acting suspiciously.

Make sure to vary the times and places you walk your dog to avoid creating a pattern for thieves to track and plan.

Don’t be tempted to leave your dog tied outside of a shop or other public spaces, this creates an ideal opportunity for thieves.

Thieves can take advantage of an unsupervised dog left out in the garden, so be sure to keep an eye on them at all times. Additional crime prevention measures should be considered in the home (such as CCTV) where a high-value breed of animal is housed.

Further advice is available at garda.ie.

Animal Welfare sanctuaries across the country are pleading to the public to adopt a dog from one of their locations throughout the country.

If you wish to learn more about Limerick Animal Welfare's work and how you can get involved please contact 063 91110 or email lawsanctuary@gmail.com.