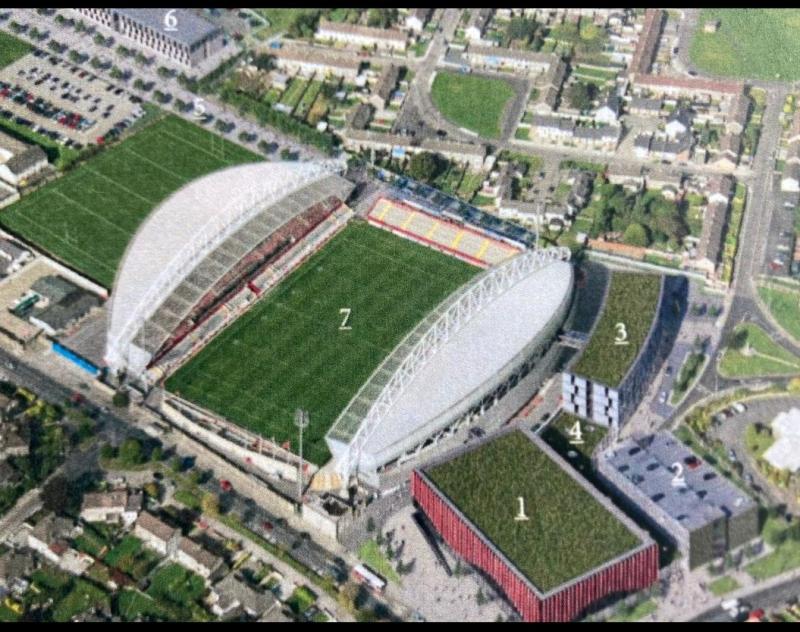 A MASSIVE €40m development on the northside could see a 5,000-capacity arena and a hotel open beside the home of Munster Rugby.​

The Limerick Leader can this week exclusively reveal plans which have been described by sources as “transformational” and “iconic” for the area.

In a move facilitated by Limerick City and County Council, Thomond Park Stadium has put together a series of exciting proposals which may deliver up to 300 new jobs.

Codenamed Project Light, the blueprint will provide for a “world-class” multi-purpose arena, able to host conferences and exhibitions, indoor sport, music entertainment and more. According to sources, this proposed new arena will compete “nationally and internationally” with business which would traditionally not come to Limerick due to the fact this infrastructure not being in place at present.

Connected to the arena will be a 150-bedroom hotel, and a multi-storey car park.​

The local business lobby has been crying out for a huge conference centre for many years, and it’s hoped that this will bring 200 roles, with local shops, cafes, and bars all enjoying an indirect boost from the new centre. The hotel itself, it’s hoped will bring around 100 roles.​

“It will act as a stimulus for the whole region,” sources have said.

Limerick Council is putting together a funding application for the scheme under the Urban Regeneration Development Fund (URDF).

If all goes to plan, some €10.5m will come from this, with the balance coming from matched funding, which well placed sources have indicated, stadium bosses are confident of securing.

On top of this, the communities of Ballynanty and Moyross all look set to benefit, with public realm upgrades and a new road network, separate to the Northern Distributor Road.

It’s anticipated this, and the potential to develop a local rail station on the Limerick to Ennis line, will improve the “social cohesion” between Moyross and its neighbours.​

Councillors were briefed on the proposals at a behind-closed doors meeting earlier this week, and were told the projected economic benefit to Limerick could be as high as €100m.

If all goes to plan, the arena could be open as early as December 2023.

The proposal for the northside is just one of the strands the council is seeking to develop under this urban renewal programme.

Another could see the development of a world-class waterfront, a move which would pave the way for a fourth bridge, pedestrian only across the River Shannon.

Munster Rugby, famous for their feats on the grass of Thomond Park have no involvement in the project, but could benefit from its development.