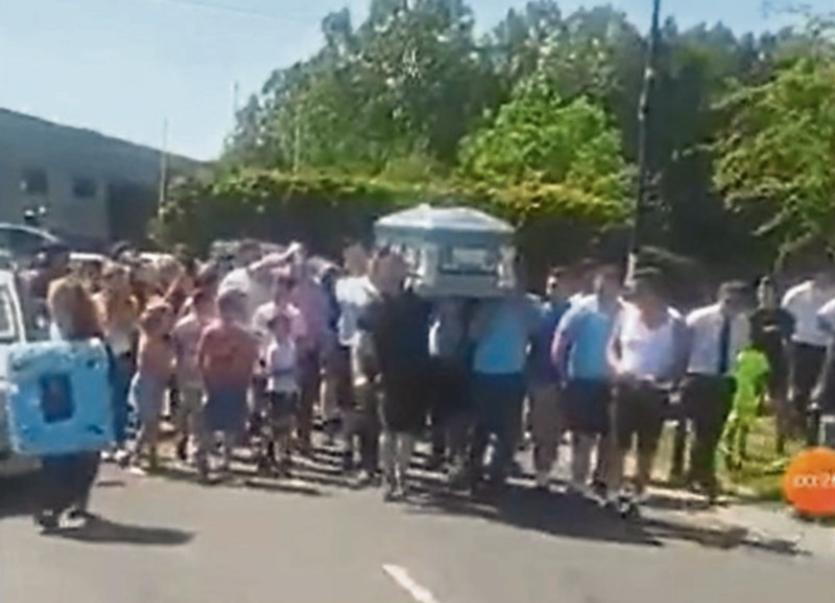 A COFFIN being carried down a street in Newcastle West by a group of men, while surrounded by dozens of people “beggars belief” says a Limerick TD.

Deputy Niall Collins said he received the video of the funeral cortege on Bank Holiday Monday from one of his constituents.

While reggae music blares, men take turns to shoulder the coffin. There are dozens upon dozens in the funeral cortege including young children. There is no adherence to the social distancing guidelines.

“There cannot be one rule for one section of society and another rule for the rest of us. It is giving the two fingers to those of us who are obeying the guidelines. They are making a mockery out of the regulations,” said Deputy Collins.

He contrasted the funeral cortege to that of Nora Enright’s in Newcastle West two weeks ago on Sunday, May 24.

“From the church to the graveyard people stood, while socially distancing, and clapped. It was a moving way of showing their appreciation for a lady we all knew as Auntie Nora.

“This was a way for mourners to pay their respects and keep within the guidelines,” said Deputy Collins.

He acknowledged the pain and suffering felt by people who have buried loved ones at this time.

“There are heartbreaking stories of family members and relations not being able to say goodbye to their loved ones, not to mind go to the funeral. They obeyed the rules because they are there to prevent the spread of Covid-19 and protect us all.

“What must they be thinking now when they see a video like this and the people in it openly flouting them,” said Deputy Collins.

Similar to the packed graveyard in Charleville a couple of weeks ago, the Fianna Fail TD said this behaviour puts priests, undertakers and gardai in an unenviable situation.

“The undertaker is in the video - what can he do? The guards can hardly go into a group of mourners bringing their loved one to the graveyard and ask them to disperse. Gardai, undertakers and priests are doing their best. It is an insult to the rest of us,” said Deputy Collins.

A garda spokesperson said they liaised with the family in advance of the funeral and guidelines surrounding funerals were clearly outlined.

“No incidents of note were reported or are under investigation. An Garda Síochána continues to observe generally excellent compliance to public health guidelines by the public.

“An Garda Síochána continues to interact with the public on a graduated response of engage, educate, encourage and as a last resort enforce the regulations as part of the public health guidelines,” said the spokesperson.

In last week’s Leader, Fr Roy Donovan, of the Association of Catholic Priests, said it is important that people, without exception, respect the current guidelines.

“Failure to do so makes life difficult for undertakers, priests and, particularly for bereaved persons who have obeyed the rules.