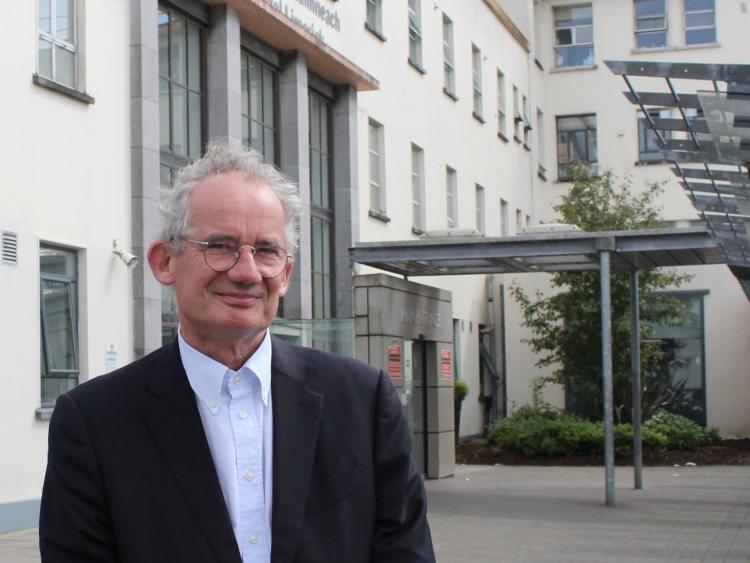 ONE of the most well-known doctors in Limerick has stood down from his post into retirement this Friday after almost three decades working in the Mid-West.

The outgoing chief clinical director of UL Hospitals Group, Dr Gerry Burke has paid tribute to his colleagues and hailed the people of Limerick and the Mid-West as “far and away the most egalitarian city and region in the country”.

Dr Burke oversaw the safe arrival of many babies during his 25 years as an obstetric gynaecologist in Limerick’s maternity hospital from 1992 to 2017.

Dr Burke said the people of the Mid-West were to the fore in his mind as he reflected on how he and his wife Mary, having visited Limerick only once or twice previously, were so warmly welcomed, not just by colleagues but also by the wider community, when they arrived in the city back in December 1992.

While Dr Burke fondly recalls all his colleagues, past and present, during his nigh three-decade career as a clinician in the Mid-West, it’s inevitable that the professional work he recalls most vividly is what he experienced during the UL Hospitals Group’s battle against Covid-19, which dominated the final three months of his tenure.

Dr Burke’s sense of relief at the management of Covid-19 in the Mid-West is tempered by caution. “It has been a massive effort, but it’s a work in progress,” he pointed out. “The threat has not gone away. It has abated somewhat, but there is a threat of us being overwhelmed by a resurgence of the disease. It’s important to remember that our ICU capacity in Ireland is still limited; that we still have limited single room space; and limited numbers of medical and nursing staff. We must not be complacent. We have got to hold firm,” he said.

He is retiring at what he feels is the right time, his “great sense of relief that our hospital services were not overwhelmed by the coronavirus” coinciding with a realisation that it was time to draw a line. “Eras come a close, and it is time to pass the baton to someone younger," Dr Burke explained.

Married to Mary, with one son, Dr Burke said: “There are some things I would like to do while there is still time, things that got put on the long finger a long time ago. If one manages to stay reasonably healthy you can reconnect. Painting is a case in point.”

CEO of UL Hospitals Group, Colette Cowan wished Dr Burke well on his retirement: “I was very fortunate to have Gerry working for me as chief clinical director. He is a person of very high integrity, who advocated tirelessly for quality and safety. When I first met Gerry, I was most struck by his moral compass, and his compassion for people who were reliant on our services. Gerry is also a very interesting person, with a great love of nature and humanity. He has seen the safe arrival of many, many children, and countless mothers locally will fondly remember him delivering their now grown up children. I wish Gerry health, happiness and the best of luck as he moves onto his next chapter.”

Looking back at the final few months of his work at UL Hospitals Group, Dr Burke paid tribute to all his colleagues across the Group: “It’s interesting that it’s three women in our hospital group who came to the fore during the pandemic. CEO Colette Cowan has done such a fantastic job in facilitating intense collaborations between clinicians and executives. Dr Sarah O’Connell, our infectious diseases consultant, whom I appointed as clinical lead during the emergency, put in a massive effort to design safe care pathways in consultation with other clinicians, backed by our tremendously knowledgeable microbiology team. And Dr Catherine Motherway came to the fore both locally and nationally. Her blunt message on that famous Prime Time interview captured the nation. The public really responded to Catherine’s message; “to do what you’re supposed to do.”

Reflecting on some of his own achievements and contributions, as well as projects under way across the hospital group, Dr Burke says that the foundations for the future are strong. Significant challenges remain in the area of bed capacity.

“Across our group there are 700 beds, and last winter, we typically had 120% occupancy, or 800 patients. If we’re required to run the group not at 120% capacity but, as is advised, 80%, well, 80% of 1,000 is 800 beds. That illustrates the challenge. We have some 135 beds coming on stream, but that will still leave a shortfall of around 165 beds. We also have to look at the beds in our older Nightingale wards that we won’t be able to use in the same way in the Covid era. This is a very big challenge, and it has to be grappled with. And of course, ultimately, it’s capital, and that’s not within the control of UL Hospitals Group.”

Regardless of the scale of future challenges, Dr Burke says the Group’s ongoing pursuit of its objectives under strategic pillars—Collaboration and Alliance; Education, Research and Innovation; Clinical Transformation; and Digital Health—leaves it on a strong footing to rise to these challenges.

Dr Burke also applauded the recent news of a €3.5m philanthropic contribution from the JP McManus Foundation Pro-Am 2021 as seed funding for the establishment at the University of Limerick of a dedicated institute for the study of infectious diseases, including Covid-19.

From Connemara roots, but raised and educated in Dublin, Dr Burke regards Limerick and the Mid-West as home.

“Limerick is far and away the most egalitarian city in the country, along with the people of the county and of Tipperary and Clare. Most people in the Mid-West don’t go to private hospitals for healthcare, they go to public hospitals. Most people don’t go to private schools, they go to public non-fee paying schools. There’s a real sense of community here; a tremendous sense of egalitarianism, and of personal freedom. It’s a lovely place to live, the people are gentle and kind, and it has been my privilege to serve them.”