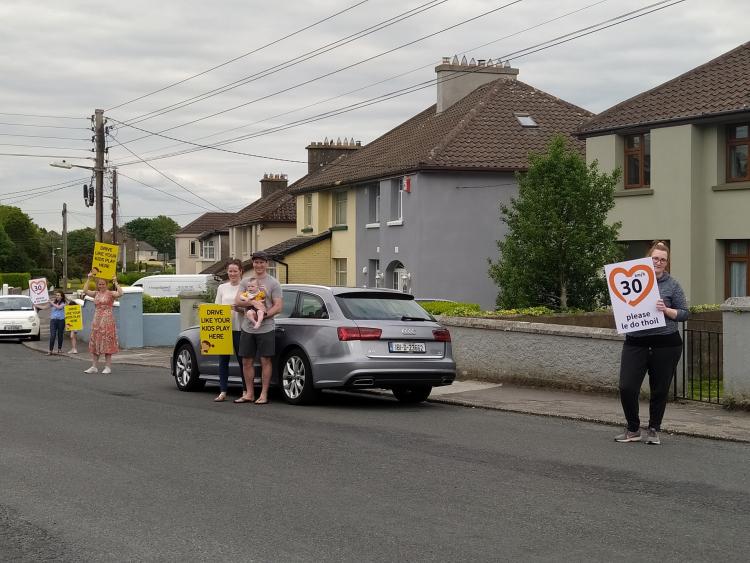 A group of residents in Mayorstone, Coolraine and adjoining streets in Limerick city came out onto the street to protest.

They are calling for their streets to be transformed into safe slow streets. More than twenty people met, while socially distancing, on Wednesday evening to protest.

"This is following Limerick City and County Council’s plans for traffic access restrictions to Rhebogue and South Circular Road, with the aim 'to make Limerick more family friendly throughout the summer months'.

"We are concerned about the lack of safety for residents of all ages using the streets. The area has seen a marked rise in walking and cycling," said Mr Ó Conchúir. He and other similarly minded locals have formed a group with a common purpose - to make their locality safer.

In addition to emergency restricted access, the group has discussed on Zoom several internal road closures that would reduce through traffic to Mayorstone and Shelbourne Park.

They are also seeking the transformation of their streets immediately using temporary measures including planters on the road. The group's “embracing” vision is for a residential area that supports well-being, community and health.

"In October 2019, Limerick City and County Council engineers conducted traffic analysis in Mayorstone. Their measurements found that the top speed recorded was 77kms. An estimated 10,000 drivers were driving above 30kms during those ten days.

"The new national Climate and Health Alliance this week called for the 'transformation of the built environment to promote healthier lives'," said Mr Ó Conchúir.

Following the protest on Wednesday evening, the group of residents plans to continue their activities. Signs asking people to "Drive 30km/h please" and "Drive like your kids play here" are being put up in the area. Residents are asking drivers to please consider using the uncongested main roads for daily movement, rather than cutting through residential streets.