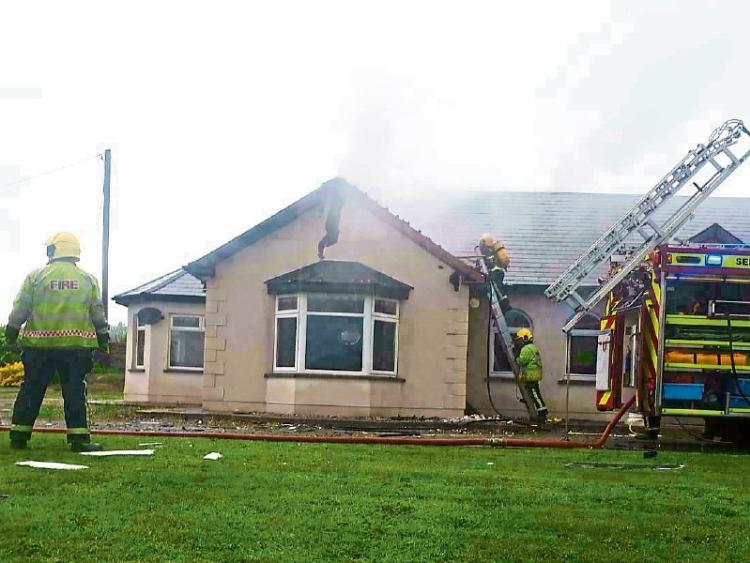 GARDAI staffing a Covid-19 checkpoint helped save a family home from destruction after a “freak” lightning strike saw it catch fire.

Kevin Clifford and his wife Breda have been left devastated after the “one-in-a-million chance” incident at their home near Kilbehenny in south county Limerick resulted in thousands of euro worth of damage at the property.

Five fire trucks tackled the blaze at their home for more than three hours, and it’s likely the couple’s entire roof will need to be replaced. Their gable-end wall saw a large break, Kevin said.

“Lightning hit the house basically. It bust out the gable-end wall and set fire to our roof. The sitting room, it’s burnt the roof off that. It’s burnt half the roof off the house,” he told the Limerick Leader.

When the incident occurred at around 5pm on Saturday last, Kevin – a welder by trade – was out changing a tyre on his quad bike with his wife inside.

The strike came as fine, warm weather throughout the weekend was abruptly interrupted by flash storms on the late Saturday afternoon, with Met Eireann issuing a thunder and lightning warning.

Kevin said as soon as he saw what happened, “adrenaline kicked in”.

”The guards were on a checkpoint near enough to us so they were here within a matter of seconds. The fire brigade were here within 20 minutes of it happening. So the response was very good in fairness,” he explained.

“It’s not the thing you expect to happen at-all,” said Kevin, who moved into the home five years ago, “The fire brigade told me there’s a one-in-a-million chance of this. It’s very very rare.”

Kevin said an insurance assessor is due out to the home, and says he hopes that he will be covered.

But there’s a job of work ahead to restore his family home.

”I’d say most of the roof will have to come off as all the timber is burnt inside. There’d be a fair bit of work to be done,” he added.

Kevin also praised his neighbours, friends and family for rallying around to support him and his wife.

Fianna Fail councillor Eddie Ryan, who lives in the nearby area, said: “We’re just thankful nobody was injured or hurt.”

“There were bangs of thunder and you could see the lightning from a distance. Apparently, it was unprecedented. It was like fork-lightning. I’ve never heard before that lightning would strike a house. But it is a serious situation,” he said.

The only thing he can remember is as a young boy on the farm, an animal was killed under a tree by a bolt of lightning.

”It’s very rare, but by God does it happen,” the Galbally man said.

The Limerick Fire and Rescue Service confirmed the incident at the Ballylanders Road.

One truck attended from Mitchelstown fire station, two from Fermoy, and one from Kilmallock.