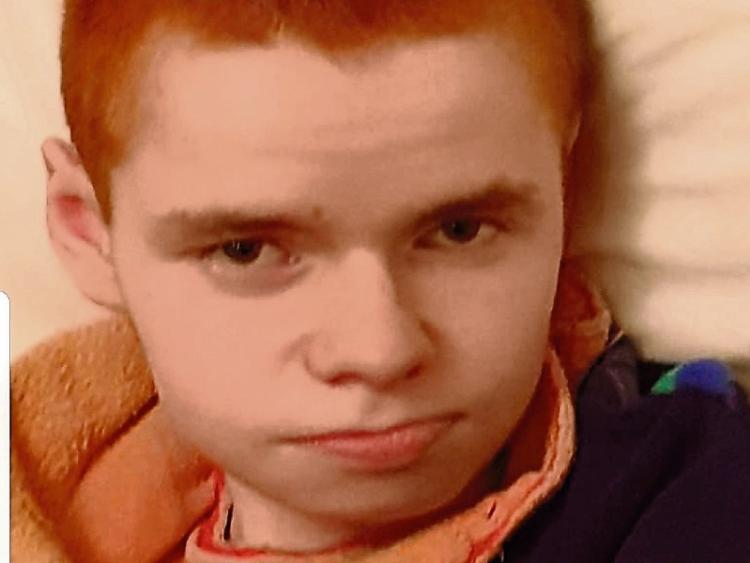 THE MOTHER of a 16-year-old boy, who died in her arms, says if anyone ever feels down, put their hands out and ask her son for a hug from heaven.

He passed away from pneumonia in University Hospital Limerick on Sunday, May 3.

Mum, Dolores said:  “I held him in my arms in the bed. I took his hands and put them against my heart. Gerry was on the other side rubbing his hair. He was cuddling his head against me and he was happy. He took his last breath and he passed away. We were privileged to be there with him. We have a little angel up in the sky now.”

Sister, Maria is in Canada and couldn’t come home but was able to say goodbye on the phone. She erected a little memorial to her brother in Vancouver. Alongside a photo of William, with his gorgeous red hair, she asks people to “take a flower for a loved one or to brighten your day”.

William had a complex medical condition that was never fully diagnosed. He had epilepsy, recurring chest infections and development delay. While fully dependent on family and carers for his 24/7 care needs William gave so much back in return.

He was particularly close with his granddad and nana. The late John called William “the boss” while he was “Willie Wonkers” to Catherine.

William and John are now buried with each other in Kilteely, where Dolores is from.

“It's so wonderful but heartbreaking to have our two bosses together. They were happy together in life and now in heaven they are watching over all of us.

“No one was ever allowed to roll William’s wheelchair or feed him while daddy was with him. He was so protective of him. Now he has him to himself,” said Dolores.

Placed in the white coffin with William were two teddies, which he loved, a small red motorbike, a soft toy from his cousins Ben and Sophie, his grandad’s black rosary beads and red scapular.

Despite the Covid-19 restrictions on funerals, William got a send-off fit for a president. Dolores asked mourners to wear bright garments because William loved colours and to put out their arms so William could give them a virtual hug.

William was fascinated by motorbikes and the hearse from his home in Woodpark into Castleconnell village was led by bikers from Buachaill Dana MCC who had a close affinity with William.

“The neighbours were out with balloons as far as Daly's Cross, down by the school and all down by the church.

"Everyone wore colourful clothes. It was lovely to see. They all put out their arms for a virtual hug from William,” said Dolores.

Outside the church, Darragh, a friend of William’s from St Vincent’s School, gave Dolores a red rose.

Fr Tom Whelan, assisted by Fr Willie Teehan, said a beautiful Mass which was streamed on Facebook Live for Maria in Vancouver and for the many who couldn’t attend. Touchingly, Fr Whelan asked the small number in the church to put out their arms for a virtual hug instead of the sign of peace. Gerry gave a moving speech and sang a song especially written for his beloved son.

"After the Mass, we came up to the house and the neighbours all came out again. We pulled up at the gate. We have two dogs - Rex and Vinny - and they looked out over the wall to say their final goodbye,” said Dolores.

The hearse continued on to Kilteely cemetery, passing Dolores’ homeplace of Garrynachara. Neighbours there had put out balloons and Limerick and Tipperary jerseys as Gerry is a Tipp man.

“When I saw them I said 'Daddy we are not too far off giving you your boy',” said Dolores. Fr Joe Tynan said prayers before William was laid to rest with his grandfather.

“He is at peace and in our own time we can all go up and sit down with the two of them and have a chat,” said Dolores.

On behalf of herself, Gerry and Maria, Dolores thanked her mum Catherine, brother Sean, all her family, nieces and nephews, neighbours, doctors, nurses, carers, SNAs, teachers, priests, those involved in the funeral Mass, Buachaill Dana, friends, undertaker and all who were part of William’s life, and all who came out to say a moving final farewell in these strange times.

“If anyone ever feels down they can put their hands out and ask William for a virtual hug,” said Dolores.