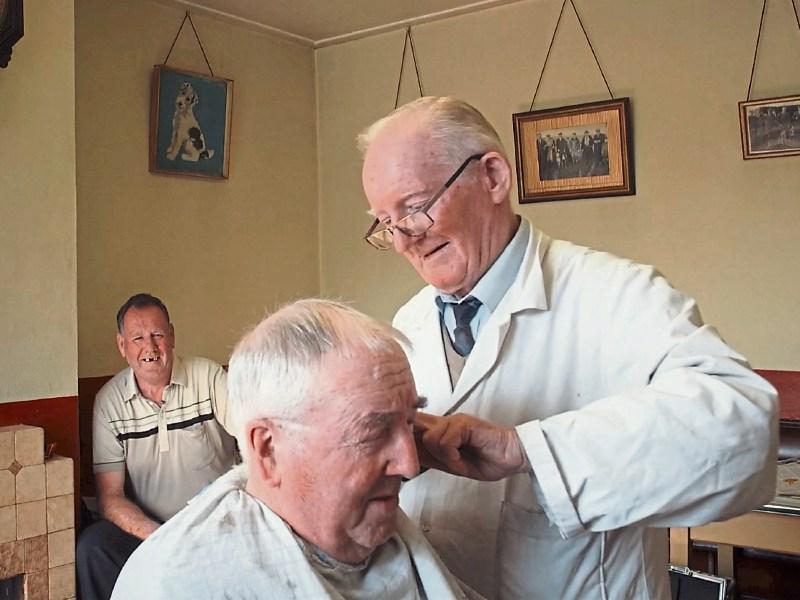 ‘The usual, please’: Long-time barber Florrie O’Connell was already an Abbeyfeale legend but he became a national one on Monday night after documentary Abbeyfealegood was aired on RTE One

IMAGINE what it would be like to get a short back and sides, your roots done or fringe chopped. Well people across Ireland were reminded what that forbidden experience was like on TV on Monday night. Abbeyfeale has more hairdressers and barbers per head of population than any other town in Ireland.
A new documentary cleverly titled Abbeyfealegood explored the full spectrum of human experience - from the tragic to the magic - through the 16 barbers and hairdressers in the town. It aired on RTE One on Monday evening and is now available on RTE Player.
Locals come to get their hair cut or coloured but they also come to talk. There is a unique and intimate bond between customers and hairdressers and some of them have known each other for decades.
It featured many great characters like Florrie O’Connell. The barber is so popular he doesn’t even need a sign over his door. Poignantly, one of the longest serving priests in the Limerick Diocese, the Very Reverend Canon James Neville, was in Florrie’s chair just two days before he died.
The show delved a lot deeper than, “Any holidays planned?” There were many light-hearted moments but also stories of grief and loss. Alisha Scannell O’Connor, of Trendy Locks Hairdressers, shared the deeply personal and tragic story of her eight-year-old daughter, Zoe’s death.
“I had finished up here on the Saturday. I was taking a week’s holidays and myself and my daughter were going up to Rosscarbery in Cork for the week. So we left, I pulled her out of school early.
“Great night that night around the beech and stuff. Thursday was a miserable, wet day so we were going to go and find somewhere to do something indoors. So, on our journey to find somewhere, a car came across the road and ended up crashing into us.
“Two guys came along and had to pull me out of the car and I remember handing Zoe over - I remember her being beside me and I lifted her up, and as I lifted her up, she fell through my legs. I assumed she had fainted. So I handed her to the guy who was outside the door of the car and another fella had to lift me out of the car, but it turned out that she actually died, she died instantly that day,” said Alisha
She said that when you lose someone in the way she lost Zoe your mind plays so many tricks on you.
“You know, anytime you feel happy you feel guilty, anything that makes you smile, it makes you think, ‘Oh, I shouldn’t be smiling’.
“But the biggest thing is that I did hit rock bottom. I took an overdose and I wanted to die, like I wanted to die and I didn’t. And I just can’t believe the amount I took that I didn’t. I wanted to be with her. Suicide side of things is an awful thing to do but nobody understands the person’s mind when they’re doing it. You think you’re doing people a favour, you know, it’s like, ‘Yeah, they’ll be sad for a bit but at least they can move on…’, that’s what’s going through your head, which doesn't make sense,” said Alisha. The hairdresser always believed there was a reason Zoe was put on the earth.
“She wasn't here forever because she was such a strong spirit. There’s so many signs she always leaves me. I remember going on my first holiday after she died and I felt awful going on holidays, like I shouldn’t be doing this - about two years after she died - I can’t be going on holidays.
“They convinced me to go and I remember getting my boarding sheet. And my seat number was 20E but written down it looked like ZOE. It was just bonkers like. I remember saying, ‘You’re okay with this, I can go on the holidays, that was another little message, that’s what she does. I always feel like she guides me on the right way.” For a lot of the time, Alisha was saying, ‘I wish I died and she didn’t’.
“So if I had died and she survived, she’d be going through what I am going through now. So you think, ‘Why did God do this?’ But in my opinion, the way I think of things is: that day the devil comes and does his work and God’s way of righting things is like with Zoe dying, he takes her to a heavenly home and gives her the most amazing world whereas it’s not God that does the nasty thing, it’s the devil.”

IT’S a pity that all barbers and hairdressers are closed as the 16 ones in Abbeyfeale would have been buzzing this week.

All the talk would have been about the documentary they starred in - Abbeyfealegood. The documentary made the country laugh and cry in equal measure. The fact that we can’t even go into one made us all appreciate what we once took for granted.

Abbeyfeale has more hairdressers and barbers per head of population than any other town in Ireland.

The programme focused on the barbers, hairdressers and their customers. Locals come to get their hair cut and coloured but they also come to talk. There is a unique and intimate bond between customers and hairdressers and some of them have known each other for decades.

It explored the full spectrum of human experience - from the tragic to the magic.

One of the undoubted stars was Florrie O’Connell, pictured. In one scene he just listened as his customer described the grief he felt from the death of his daughter. Florrie’s sensitivity and tenderness in not interrupting was one of the stand-out moments.

The reaction on social media to the programme was overwhelmingly positive. One said: “This is exactly what the country needs right now.” While another added to the legend that Florrie has become by saying, “He used to charge £3 for a haircut but always gave you back 20p so you could get sweets in Ann Lyons’ shop across the road”.