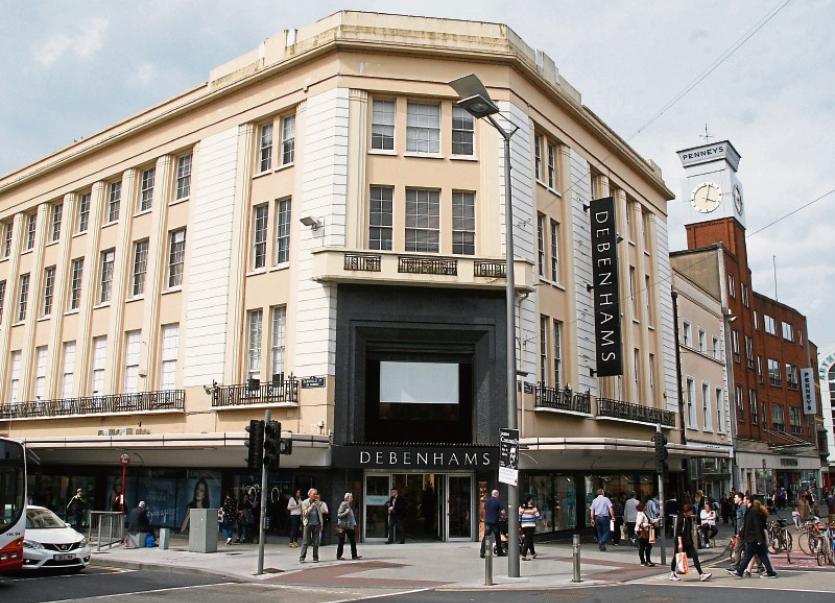 Debenhams management wrote to staff this morning informing them of the dreadful news | PICTURE: ADRIAN BUTLER

LIMERICK has suffered a devastating blow after it emerged department store Debenhams is to liquidate its operations in Ireland and close all its stores.

A reported 110 jobs will be lost locally after the firm, whose store operates from a prime location at the O’Connell Street/Sarsfield Street junction, wrote to staff members this morning confirming an application will be made for its Irish arm to be placed in liquidation under the Companies Act 2014.

The store had already suspended trading in the wake of the outbreak of the coronavirus.

"In these unprecedented times, Debenhams is having to make exceptionally difficult decisions," the company said in the letter.

"Unfortunately, our Irish business has had trading challenges which were exacerbated by the impact of Covid-19. In the UK, Debenhams has entered into administration in order to protect its business. Regrettably, due to the challenges facing Debenhams Retail (Ireland) Ltd, it is anticipated that an application will be made to appoint a liquidator to the Irish operations."

"As you know Debenhams has already suspended trading in the Republic of Ireland stores and we can confirm that these stores are not expected to reopen. "

"In ordinary circumstances, communication about this process would have been done face to face, however, due to the Pandemic you are receiving this message via email, and we apologise for that."

It's a devastating blow to the city, with Debenhams considered one of the flagship retailers in the centre trading in a spot which was once Roches Stores.

Fine Gael councillor Daniel Butler said: "My thoughts have to go to all the staff. It's an historic location and this development is of huge concern to the city centre."

"The reality is in the coming weeks and months, we are going to see further closures due to Covid-19. We need to see quikc action taken on this from the government. Nationally, a liquidity injection needs to be put into small companies so they can return to trading when these measures are removed."

However, Cllr Butler warned there will have to be a high level of investment nationally to see businesses through this.

Labour councillor Conor Sheehan said the first job of the city centre's new retail manager Celia Larkin must now be to find an anchor tenant for the Debenhams site.

"This is terrible news for the hard working staff and for the people of Limerick who shop in Debenhams," he said, "Debenhams and before that Roches Stores are part of the fabric of Limerick life for generations."

Sinn Fein TD Maurice Quinlivan added: "It is very stressful for workers to lose their jobs at any time, but right now during a pandemic when people are really struggling, is a double blow. I have contacted the Minister for Business to ask what measures the government will put in place immediately to help these workers and their families at this difficult time."

The struggling retailer is to enter administration in Britain, and there were initial hopes earlier in the week that the Irish stores would stay open. Then, a spokesperson for the company said that Irish stores were unaffected by the British measures.

Along with Limerick, the department store also has branches including at Newbridge, Dublin, Galway, Tralee, Waterford and Cork.