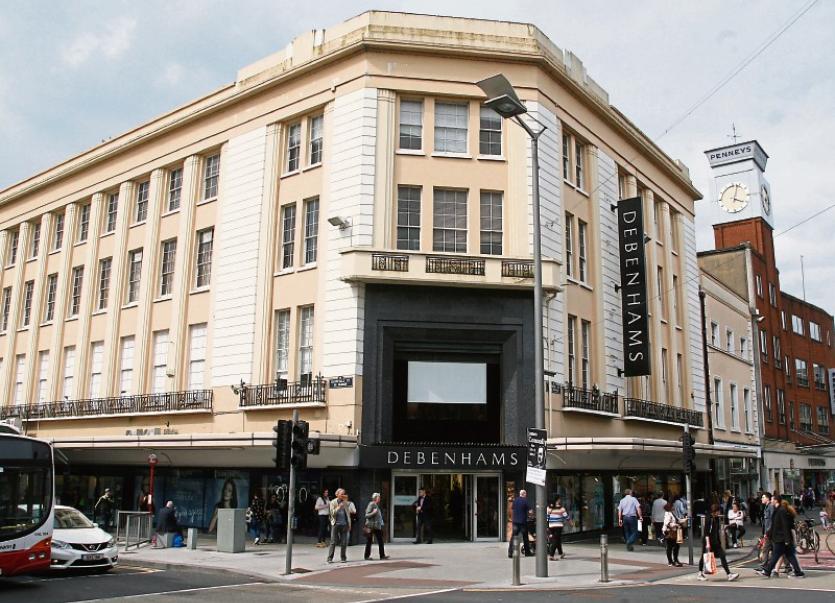 Debenhams in busier times. The shutters are down on the department store at present due to Covid-19 | PICTURE: ADRIAN BUTLER

LIMERICK’s retail sector has received a boost after it emerged Debenhams’s Irish operations will not be subject to the tough measures at its British stores.

Cross-channel, the struggling department store is to enter administration for the second time in a year, with 22,000 jobs under threat. The company has clamed the move on the coronavirus crisis.

However, this move does not impact on the firm’s 11 Irish stores, nor the 1,400 staff working here, including workers at the prime city centre spot at the O’Connell Street/Sarsfield Street junction.

Like most of the city centre’s stores, Debenhams is currently not trading on public health grounds.

Fine Gael councillor Daniel Butler has welcomed the fact the chain will not close its store in the city.

“It’s great to hear our operations won’t be affected. They are stable jobs, and we need to retain shops like this, especially with the trouble the city centre has been experiencing and the troubles it’s like to face going forward,” he said.

“I welcome the news. Hopefully things will return back to normal quickly, so we can all get back to shopping in local shops, and supporting local positions as much as we can.”

A Debenhams spokesperson earlier confirmed the Irish arm of the business was not affected by the decision.

“Obviously the stores in Ireland are temporarily closed owing to the current situation, but the business is still trading online and the intention is to reopen the stores once the government restrictions are lifted,” they said.

Outside of Limerick, the department store also has branches including in Newbridge, Dublin, Galway, Tralee, Waterford and Cork.