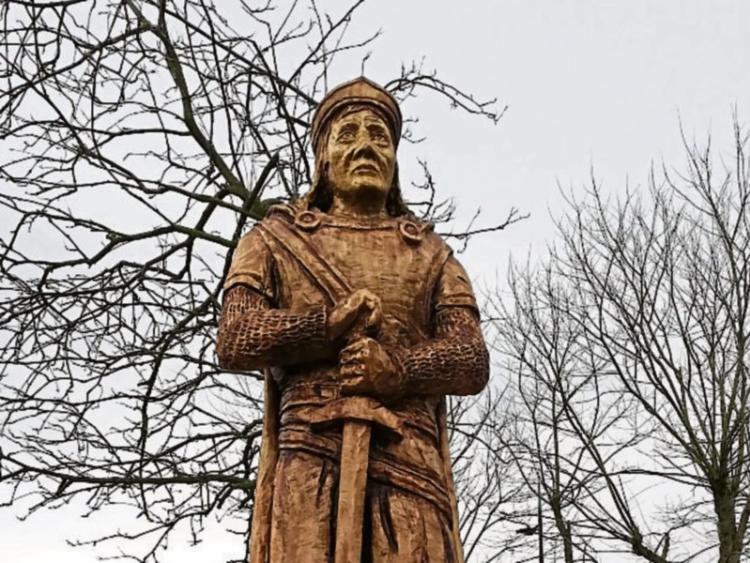 THE FORMER King of Munster has returned to protect Limerick at this time of national crisis. Donal Mór O’Brien stands proudly once again on the grounds of St Mary’s Cathedral.

He is a chip of the old block thanks to chainsaw sculptor Will Fogarty. The man from Hospital, county Limerick was commissioned by the cathedral to make one of his works of art. “A few trees had to come down because they were doing damage to the boundary walls in St Mary’s. They are  beautiful structures so it would have been an awful shame if anything happened to them,” said Will, of  Fear na Coillte Chainsaw Sculptures.

After some consultation on what to create they decided upon Donal Mór O’Brien from the 12th century.

“He was the last King of Munster, his palace was supposedly on the grounds of the cathedral. When he came to power he founded churches all over Munster and the cathedral was one of them,” said Will.

It took Will a week and a half to make the remains of a poplar tree into this masterpiece. The attention to detail is incredible, down to the chainmail effect on his sleeves and the brooches to keep his cape up.

Will had to rely on artistic licence for the face but he got lucky.

“He has a pretty big nose but somebody told me yesterday that apparently the O’Briens were renowned for having big noses,” said Will.

The sculpture was completed by Will on Wednesday. It is now there for the public to enjoy while obeying social distancing guidelines, of course.

“It was lovely working in my home town. The amount of support I got was brilliant. People passing by the railings were shouting in, giving encouragement, giving thumbs up. It was amazing.”