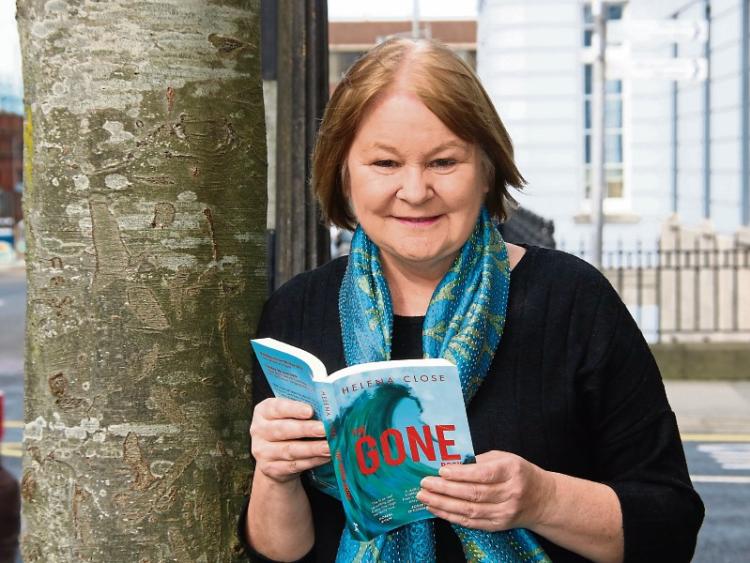 HELENA’S innate desire to write stories that deeply resonate with readers has always come before the need to write for a particular demographic.

The Limerick author’s fourth novel, The Gone Book, is technically a young adult novel - though the themes, characters and plot is one that both 15-year-old’s and 50-year-olds can relate to and engage with.

“I don’t tend to write for a genre, I write what’s in my head,” Helena simply and unapologetically told the Limerick Leader.

“There’s a need out there for good stories, and I want to leave a decent legacy of writing and work after me,” she added. “So there's my focus, and I suppose it's easier for me as, as I get older, to be less concerned with bestsellers or anything like that and more concerned with how I do myself as a writer.”

The novel, which is set for release on April 2, tells the story of 15-year-old Matt, whose mother walked out of his life when he was a child.

“I just heard a true story of a mother who walked out on her kids, just never saw them, never had any contact with them afterwards. We hear all the time of dads walking out on their kids, and it's almost accepted in this society.

“I just thought it would be interesting to maybe turn the tables, it caught my curiosity. A girl and her mommy - we hear that a lot. But a boy and his mother - what's that going to be like? How will it be? What if she actually comes back?

“I think I had that idea for about a year and just let it compost in my head, and allowed the characters to come through themselves. So in the end, it was the main character of Matt and his friend Mikey. They’re two boys at the beginning of summer 2018 in Limerick.

“To a certain extent, it's almost a bookend to my first novel which was about two boys' friendship at the beginning of the summer in the mid '70s,” Helena explained. “I like that mirror thing, where everything is so different, but everything is the same, just different generations.

Helena works with students in Thomond Community College as a narrative facilitator and said: “It’s all teenagers and I absolutely love them, they're so underestimated. But you have to put the work in with them, you really have to work at it with them to connect.

“But what’s great now is that there's a whole movement now with young lads,” she continued. “As a mother, I feel responsible in bringing my son up to be a feminist for example, and I think I've succeeded with that. It’s things like that, that's up to parenting as well, to acknowledge feelings. With mental health, it's lads and men really have the most difficulty in actually having honest conversations, you know?

“This book is a 15-year-old learning to be able to articulate his feelings about his mother, but also about what's going on in his life and about making sense of the real world.

The book explores themes of family, friendship and the trials and tribulations that come with being a modern-day teenager.

“It details the general difficulty in negotiating the world if you're a teenager, with alcohol and drugs. We can pretend they don't exist, but I chose to actually write the gritty, real kind of picture. I feel teenagers will be more inclined to relate to that because, you know, this is what they know.”

The story takes place in Limerick, with Helena stating that “it’s very important in writing to have a sense of place.”

“I don't like making up places,” she said. “We have a gorgeous city as a backdrop.

“The skate park features heavily because the protagonist is a skater. I love the idea of skating, the sound of the wheels on the ground. I love when they do little tricks. There’s this whole kind of soundscape that goes with skating.

“My son used to skate many years ago, I think it's an incredible community. It's always stuck with me, this skating community came from all over the city, it didn't matter where you were from, it was very united. I used to sit below in the skate park, while I was writing in the early stages, and you'd have this soundscape of the skaters and the sun setting over the river and that told me that this is where they live. It’s just so beautiful and almost calm in the middle of a city.

“It's Limerick, but it's really Limerick. It’s Limerick with all its warts and everything that goes with it and what's going on with a city. It's not a Bord Failte version of a city in Ireland, it could really be set anywhere.”

When asked whether she feels a certain responsibility with not only being a Limerick author, but writing about Limerick, she said:

“I think that's a very interesting question, and in some ways, yes. I remember my third novel, The Clever One, which was extremely well-reviewed. Some of it was in the Limerick vernacular, and there was one Limerick reviewer that said Limerick people might be offended by this.

“I don't mind, I don't care about reviews, I’m in that lovely place now. But, you know, it's okay for Roddy Doyle to have the Dublin vernacular, but we're not allowed to have any vernacular here in our own city, which isn’t fair.

Despite being a writer of fiction, Helena has adopted a methodology to inject real life and real people into her stories.

“Fiction is fiction, but it still has to come from somewhere. It comes from snatches of conversations in cafes, or pubs. It's a chance you have, it's stories you read. So it always comes from real life.”

Helena is a self-confessed recluse when writing, taking to the coast with no internet in order to submerge herself in her craft.

“I’ve been a self-isolator since the nineties,” she laughed. “I'm happiest when I'm working and really kind of stuck into a project. It just overtakes everything, everything in my life. I’ve a mobile home in Spanish Point and I just love going down there by myself. My days are my own and they are punctuated with swims - my treat is the swim afterwards, the walk or the sunset.”

The book has been published by Little Island, who Helena has endless praise for.

“I do love this publisher. They take such care with their books, and their books are like little works of art. Every single one of them. My editor Matthew Parkinson Bennett is just amazing. I think that's so important, to have an editor that you absolutely trust. I trust him implicitly you know, and I've taught him loads of Limerick-isms, which is great. “

The book, priced at €9.99, is available from Little Island’s website and from O’Mahony’s Booksellers, where signed copies will be available after it’s release. The official launch of the book is set for later in the year.