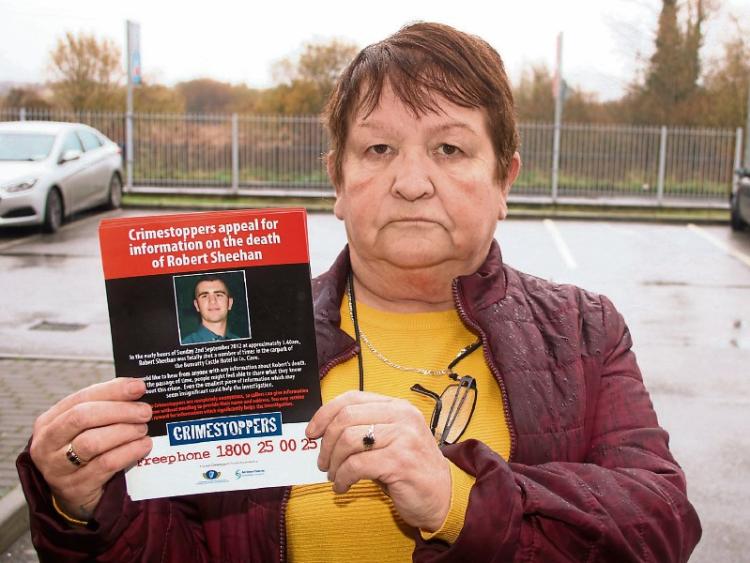 A YOUNG Limerick man died after he was shot in the back of the head while attending a family wedding, his inquest has heard.

The inquest into the death of Robert Sheehan was officially opened at Limerick Coroner’s Court last week – more than seven years after his killing.

The 21-year-old, who was from Moyross died after he was shot outside a hotel in Bunratty in the early hours of September 2, 2012.

Addressing relatives of Mr Sheehan, including his mother Majella, coroner John McNamara indicated that gardai were seeking an adjournment of the inquest as investigations into the murder are ongoing.

He advised them that while he could open the inquest, there were restrictions as to what evidence he could hear.

He added that he could not conclude the inquest given the garda application which was formally made by Inspector Liz Kennedy who said it remains a “live investigation”.

“Legally, I am precluded from doing so once the application is made,” he said adding that he prohibited from disclosing certain information “to anybody” as it had the potential to “hinder of impact” the garda investigation.

During the brief hearing, Mr McNamara then proceeded to read the findings of a post mortem report into the record.

He said the post mortem was carried out by the then deputy state pathologist, Dr Khalid Jabbar, who found that Mr Sheehan had died as a result of a “penetrating gunshot wound to the back of the head”.

No further evidence was heard with the coroner reiterating what that he did not want to jeopardise the garda investigation.

When asked by Mr Sheehan’s family, he confirmed that the inquest may be adjourned again.

”It can be adjourned – effectively on an ongoing basis until the State concludes its investigation and confirms it is at an end,” he said commenting that it is possible new evidence could emerge “ten years down the line”.

Apologising for the delay in opening the inquest, Mr McNamara told members of Mr Sheehan’s family that he was not the relevant coroner at the time and that there was a “note on the file” when he was appointed to the role.

The inquest was formally adjourned to September when the State will be asked to give an update regarding the investigation.

The opening of the inquest means the death of Robert Sheehan will now be officially registered.

While there have been a number of arrests in relation to the murder of the 21-year-old, nobody has ever been charged with his murder and the chief suspect is understood to be living in the UK.

Gardai at Shannon are investigating the murder.