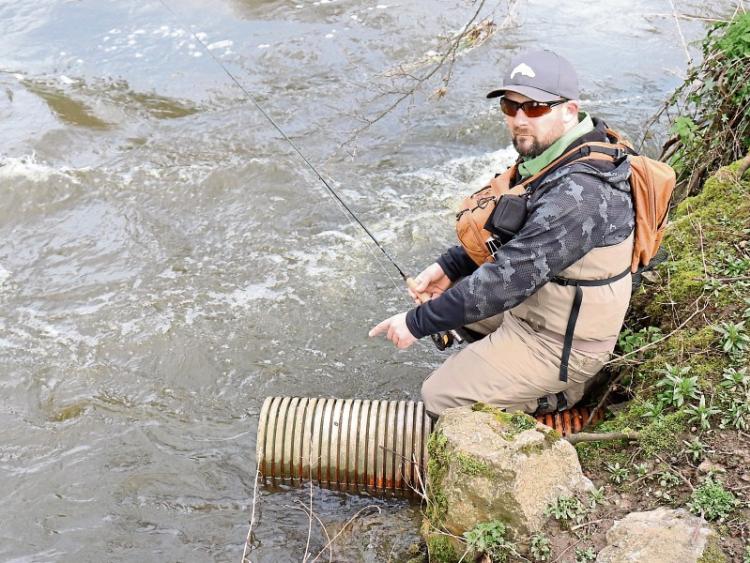 A COUNTY Limerick angler has come to the end of the line over a pipe carrying raw sewage into the river where he fishes.

Mikey Foley, aged 35, has vowed to block the pipe near the People’s Park in Kilmallock if the problem isn’t sorted in the coming weeks. He has seen human excrement flowing out and toilet paper and female sanitary products caught in weeds.

“I’ve been reporting this pipe for 10 years. It is coming and going. The local fishing club has done loads of work on the Loobagh to enhance the river for salmon and trout below Kilmallock but it's a waste of time when this kind of thing is happening above where we put in new spawning beds.

“It's at the stage now that I'm going too block it up myself. If it starts flowing down the Main Street of Kilmallock then they might do something about it,” said Mikey.

He has purchased bags of quick drying cement and expanding foam. Mikey says if the issue hasn’t been sorted by the end of March he says he is going to put a stop to it.

“I’m sick of it. It is disgusting. All I want to do is enjoy a bit of sport on my day off and I can’t do that down there. The smell is terrible.

“There is great access there but I can’t bring my 10-year-old daughter down to fish because it is horrible. I have fellows coming over from Tennessee in a few weeks to fish the system and I can’t bring them there. It is embarrassing,” said Mikey, who adds that if there was raw sewage flowing out of his house in Bruree, “I would be before Kilmallock Court in the morning”.

Read also: Why are we preserving views of the Shannon, asks Limerick councillor

Following a Limerick Leader media query sent to Irish Water, a spokesperson said: “We have received reports of a discharge in this area and are working in partnership with Limerick City and County Council to investigate its source(s) and resolve the issue. We will provide a further update pending the outcome of this investigation.”

When Cllr Mike Donegan learned of the raw sewage issue he immediately contacted Irish Water and the council.

He has put down a motion for next week’s Cappamore-Kilmallock municipal district calling on Irish Water to “carry out urgent remedial works on the surface water pipe in the river Loobagh being used as a storm overflow from the public sewer at the rear of Deebert Close, Kilmallock”.

“Unfortunately, this is a recurring problem. It is linked to a storm overflow from the public sewer. Whenever there is a blockage in the sewer it overflows to the river.

“The council have confirmed that they are going to complete a CCTV sewer survey on the pipe to identify the problem,” said Cllr Donegan.

Mikey says he doesn’t want to have to go on social media sites or the local paper to highlight this.

“But nobody is taking any responsibility. All I want to do is practice my fly fishing down there in the hope of some day representing my country,” said Mikey.

He explains that there is a Q rating system in Ireland to measure the quality of the water.

“Q1 is the lowest and Q5 is the highest. There are only 20 Q5s, which is pristine water, left in Ireland. The Loobagh is a Q4 which is unbelievable and that is down to good farming practice and then you have raw sewage flowing into it.

“There are new signs gone up on the river Loobagh walk from the council saying if you don't pick up your dog’s dirt they will fine you €5,000 and on that same walk there is a pipe dumping raw sewage into the river,” concluded Mikey.