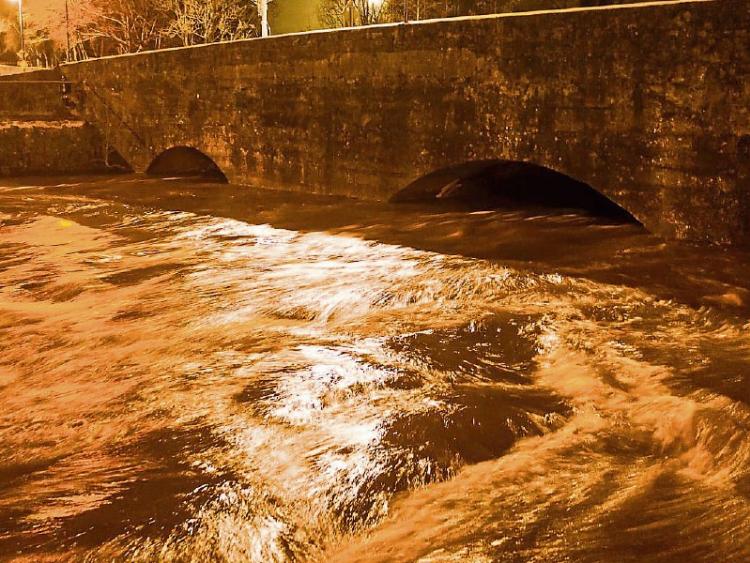 FLOODING, disease, all we’re missing is locusts and it will be the apocalypse.

The photo shows just how high the Mulcair river got after the heavy rain over the weekend and Monday. It resulted in localised road flooding this week. Mountshannon Road and Mulcair Drive were impassable at certain locations and it caused traffic chaos.

ESB is currently releasing 280 cumecs at Parteen Weir but this could rise in coming days. However, it is still well below the 400 cumecs released at the beginning of March. Land is absolutely saturated and anything that falls from the sky runs straight into rivers. Hundreds upon hundreds of acres remain under water and flood defences remain in place.

From speaking to people in Castleconnell, Montpelier and the Mountshannon Road affected by rising flood waters their one constant complaint is that there has been no dredging done. The Leader put this charge to the OPW.

A spokesperson said the Catchment Flood Risk Assessment Management (CFRAM) programme commenced in 2011 for the River Shannon and examined 67 areas within the Shannon catchment, and involved extensive public consultation so that local knowledge and opinions have informed its output.

“The Flood Risk Management Plans (FRMPs) arising from the CFRAM Programme include 34 new flood relief schemes to protect towns in the Shannon River Basin District, which form part of the Government’s €1bn investment in flood relief over the decade to the year 2027. These new schemes will be subject to a public consultation process and are additional to 13 schemes already completed or under construction. Together, these will protect 95% of properties against their significant risk from flooding.

“The CFRAM Programme and the FRMPs has informed the work of the Shannon Flood Risk State Co-ordination Working Group, which was established in 2016 to support existing plans in place and planned to address flooding and to enhance the ongoing co-operation of all state agencies involved with the River Shannon.

“The group is chaired by the OPW and provides a forum where all statutory organisations with roles and responsibilities that involve the Shannon catchment can further monitor and co-ordinate their respective programmes to manage flood risk on the Shannon catchment, taking into account the FRMPS.

“On its establishment, a priority for the group was to develop a work programme that demonstrated the extensive range of activities and co-ordination by all state agencies already underway to jointly and proactively address flood risk along the Shannon. The group’s annual work programmes are available at www.opw.ie,” said the spokesperson.

They say the group has taken a number of significant decisions since its establishment, including a plan for targeted maintenance activities along the River Shannon.

“Following receipt of consent from the National Parks and Wildlife Service, works involving tree cutting and the removal of silt and emergent vegetation was undertaken at five locations during the appropriate seasonal windows. A pilot lowering of Lough Allen has been undertaken for the last three years to provide additional storage capacity for flood events.

“A hydromorphological assessment of the Lower Shannon has been commissioned to identify the cause, rate and degree of restriction over time due to sedimentation and subsequent vegetative growth with an expected completion date during the latter half of 2020,” said the spokesperson.

In January 2020, Kevin ‘Boxer’ Moran, Minister of State with special responsibility for the Office of Public Works and Flood Relief, announced he has secured government support for €7 million investment to advance a planned programme of maintenance works and the removal of constrictions or ‘pinch points’ on the bed of the River Shannon at the Callows Region between Athlone and Meelick Weir to improve the conveyancing of the River Shannon.

“The Shannon catchment is a very sensitive environment and any interventions such as removing pinch points requires consents and approvals from the appropriate authorities. Applying for such approvals is a statutory process which must be complied with. While there are a range of views as to what will ‘solve’ the flooding problem in the Shannon catchment, large scale dredging is not appropriate or viable. The various agencies within the Shannon Flood Risk State Co-ordination Working Group have looked closely at what may be achievable and allowable, and has developed its work programme accordingly,” said the spokesperson.