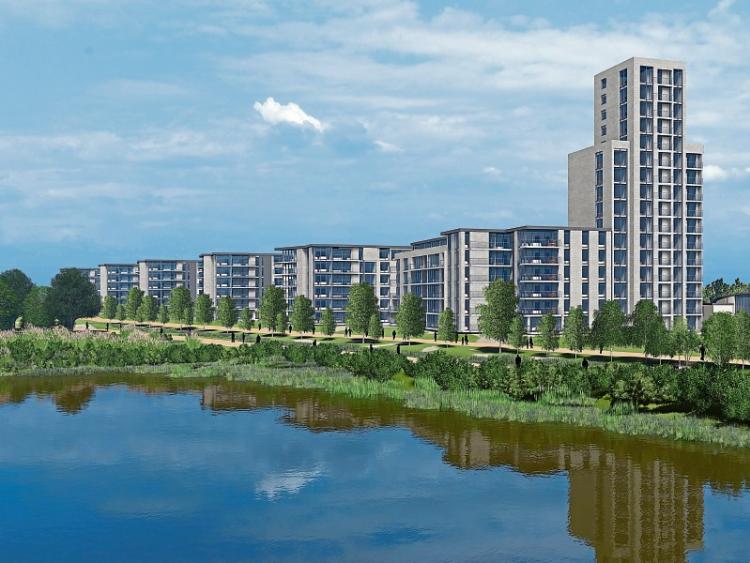 An architect's impression of the proposed development

A GREEN Party councillor has criticised the number of buy-to-rent apartments in a planned housing development in the city.

City East councillor Sean Hartigan was speaking after members received a presentation of the proposed Pa Healy Road housing development, which could see almost 450 homes constructed along the Canal Bank.

In plans exclusively revealed by the Limerick Leader, Revington Developments has sought planning permission to build 442 units, comprising 363 build-to-rent apartments in a mix of studio, one bedroom and two-bedroom apartments.

There will also be 61 student apartments in a mix of two, three and four bedroom apartments, totalling 189 student bed spaces.

And as part of the proposal, 18 dwelling homes will be constructed, according to the plans which were shown to members of the metropolitan district this week.

But Cllr Sean Hartigan feels the buy-to-rent element of the plans will lock any young couple out of owning their own home.

“I’d have serious reservations around the build-to-rent scheme,” he said.

“This will take away people’s chances to own their own homes. A site like this is an area where the council should be building public homes.”

And he warned that many of the apartments will lie idle, with an institutional landlord only letting them out if they can extract the maximum value from them.

Cllr Hartigan also warned that the site is “challenging”, as it contains “contaminated soil” and is also a known habitat for otters.

Cllr Kieran O’Hanlon expressed concerns around the traffic on the site, pointing out that vehicle use on the Pa Healy Road is already high.

“Lots of students will also be using the canal and walkway. Unfortunately we are without a cycle-way and footpath,” he noted.

Planning official Stephane Duclot said that 10% of the homes will be designated as social housing.