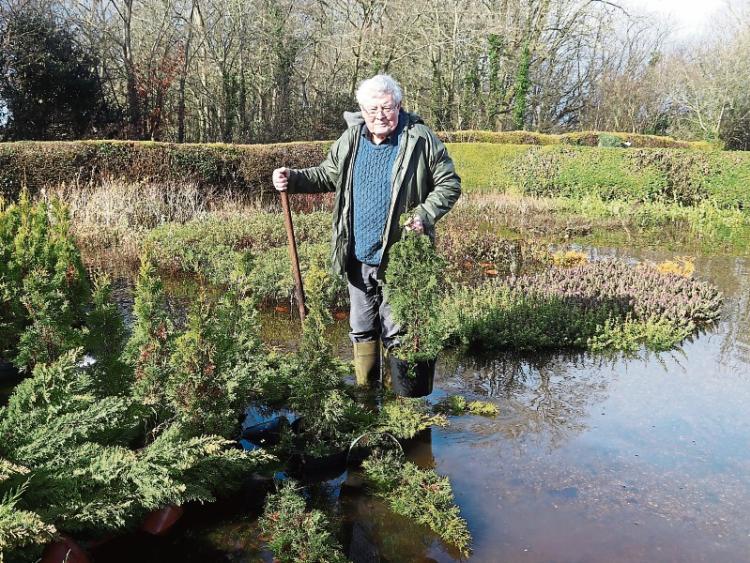 John McDonagh in his flooded property

JOHN McDonagh needs webbed hands instead of green fingers as his garden centre is underwater.

The 74-year-old said over half of his Grove View Garden Centre in Mountshannon Road, Lisnagry, was covered in water.

“This is the third time in 10 years. I’m fairly sick of it at this stage. There is only so much of it you can take. There is well over half an acre covered.

“I have conifers, shrubs, hedging - you name it. Some will only last a day but more can last a couple of weeks – most of them are gone. It was four and a half feet to a few inches deep,” said Mr McDonagh, who estimates he has lost between €12,000 and €14,000 in dead plants and shrubs.

“There is no compensation for it. I can’t get insurance,” said Mr McDonagh, who was born and raised in the locality.

He can remember 1954 when there was a massive flood.

“There was a lot more water left off in Ardnacrusha than now and it didn’t do a quarter of this flooding. They used to dredge the river back then. I can’t remember the last time they did that but it is a long time ago. Nothing has been done. It is ridiculous

“Look at all the islands in Plassey – it is only a series of big streams. There is no one body over the management of our rivers,” said Mr McDonagh.

His neighbour Christina Butler agrees with the lack of dredging. Since Sunday, February 23, her family have been cut off. Not even a tractor was able to drive through the floods to her house. She has had to walk through fields for quarter of an hour at the back of her home to get out onto the Mountshannon Road.

Read also: ‘You can hear the roar of the river. You know it is coming’ – Limerick flooding victim

“Ten days is nothing. In 2015 / 2016 I was seven weeks going through fields. It was absolutely horrendous. That was the worst we have ever seen,” said Ms Butler. As she knew flooding was on the way, she made sure the oil tank was full and had stockpiled food. The good news is that Ms Butler hopes that she will be able drive to her home in a jeep by this Thursday.

“It has gone down a good bit. The ESB dropped the discharge from 400 to 370 cumecs at Parteen on Tuesday. The rivers still need to be cleaned. If they dredged pinch points in Castleconnell, Plassey and the ones up river, collectively, it would help,” said Ms Butler.

Another neighbour, Ger Enright has been fighting flood waters for over a week and a half. His house is surrounded by thousands of sandbags and has pumps going 24/7. He said it was a “tough weekend” but the water started receding on Monday.

Up in Castleconnell, the boat clubhouse was flooded. However, Pat Kiely, club member, said damage was reduced because of lots of work put in over the last couple of days and weeks, and the flood wall and barriers.

The Limerick Leader put queries to the ESB and OPW about dredging. An ESB spokesperson said: “The OPW is the lead agency on flooding and they would be responsible for dredging. They also lead the multiagency group.” The OPW had not responded at the time of going to press.

Meanwhile, Deputy Willie O'Dea has called on the OPW and council to install temporary measures before next winter to mitigate against flooding in Castleconnell and Lisnagry, as planned permanent flood defences will not be in place for two to three years.