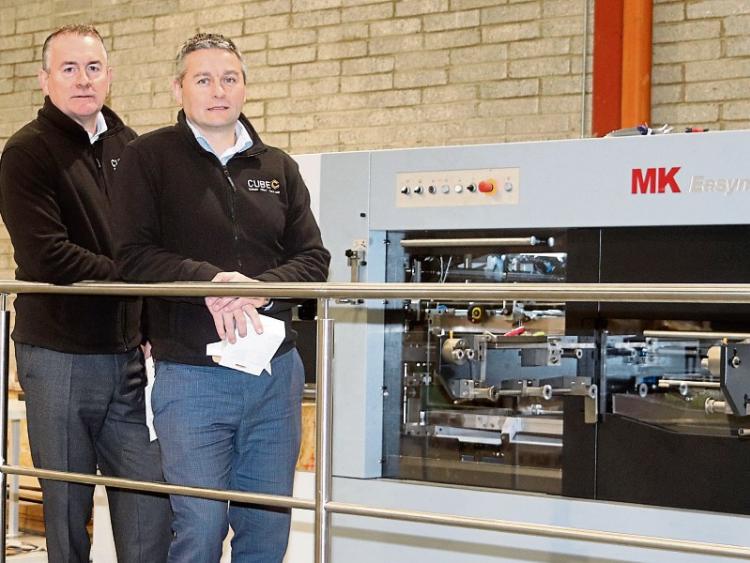 Gaining an edge in business is more than just spotting an opportunity and making a bold investment, it’s about timing too.

Following a substantial investment by his business Cube in cutting edge printing technology, Brendan Ring received a large order from a company supplying surgical masks to the international market, which has exploded due to the Coronavirus.

It was a timely reminder of the influence of global events on local businesses too, Brendan reflected, speaking to Limerick On The Up, when he revealed some €750,000 had been laid out to expand the packaging division at Cube.

Having handled the design and pre-press of packaging products before, they had previously been outsourcing the rest of the job for completion. But that has changed.

“We bought two new pieces of kit, worth around three quarters of a million euro and we have taken on four new people,” Brendan said this week.

“What the machines do is they die cut that printed image for a carton or sleeve or outer packaging, and then fold and glue the item to make a finished product.”

What previously was being outsourced, primarily to Dublin where the main finishing houses are, is now all done in-house

“We noticed a niche in the market because here in Limerick and the Mid-West area there wasn't anyone doing what we’re now doing - providing that full turnkey solution for the packaging industry.

“Also we realised you lose a bit of control when you send something out, from a quality point of view. Being able to meet delivery times is another factor.”

Read also: Limerick on the Up: Feel Absolute's embrace at the edge of city centre

So the company spoke to a few of its customers, told them it was making a big investment and wanted their support and has received a positive response.

As of January, the orders started rolling in.

Given the size of the investment in the Easy Matrix Die Cutter and a Diana Go Folding and Gluing Line, there is a long way to go but the immediate response has been most encouraging.

The misfortune of a global medical alert has played its part in that.

“We had been talking to a company about doing their packaging for quite a while,” says Brendan, “and they had a big surge in demand for their masks because of the outbreak of the Coronavirus, so we got a substantial number of orders from them in the new year to keep up with their production.

“Even though they had a primary supplier, we were glad to be able to come in and support the upturn in their business and work with them going forward.

“But that demand came purely speculatively even though we had been speaking to them, opportunistically, I suppose, on the back of the outbreak.”

Cube has been on the go since 1996 and grown to around 40 people. Four more have been taken on following this new investment and Brendan is hopeful it will lead to further employment.

“This is a great addition to our company because it provides the complete supply chain solution for our customers. What you notice in the packaging market is lead times are very long.

“The guy that needs short runs, tens and twenty thousands of units can’t get them on time - they’re probably waiting 12 to 16 weeks. There is a lot being imported from China and the Far East to service this, but now we can say that here in Limerick there is a real solution to this.

“In our experience in the industry, there is a big issue about minimum order quantities, quick turnaround and on-time delivery and we've got that reputation from our past experience in printing to provide for that.

“Now we’re able to to say you can get cartons on short runs when you need them, on time and for a very competitive price, you don’t need to be holding large volumes of stock or having long lead times coming in outside of Ireland, that’s the niche we're going after.

“Embracing the new technology at the cutting edge of printing is an important part of that and we're looking to do as much business with Limerick as possible.”