Nuns on the run: Over 100 involved in Limerick school’s production of Sister Act 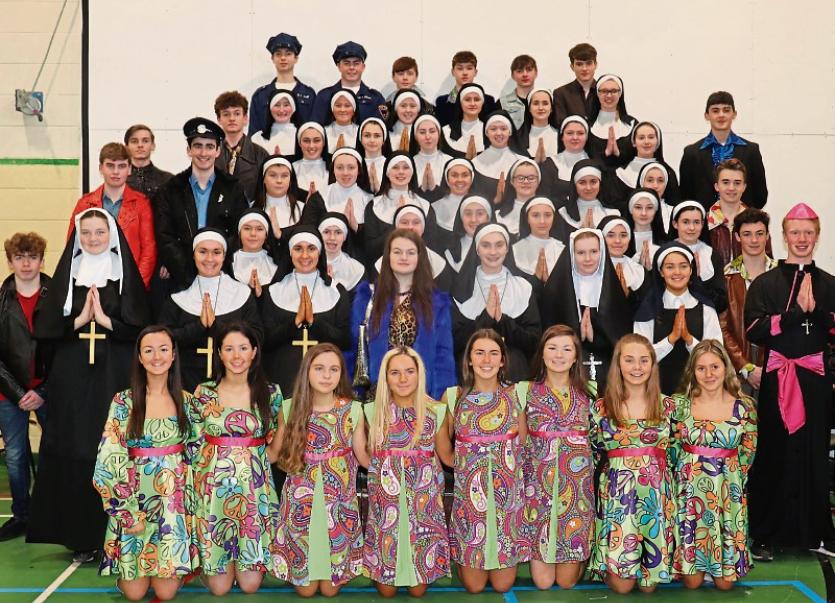 The cast and crew ready for the weekend's performances

SISTERS, and brothers, are doin’ it for themselves and the audience in John the Baptist’s performance of the musical Sister Act.

It follows the story of Deloris who goes into witness protection in a convent after she sees her mobster boyfriend involved in shady actions. Around 100 transition year students are involved in the production. It takes place this Friday at 8pm and Saturday at 8.30pm in the Hospital community school’s hall.

“I have seen it a couple of times and I like it. We have a big number of girls so I felt that it was a show that they could really get into and perform well,” said Ms McNulty.

“It is a very nice story with a little bit of romance. There are themes of friendship and loyalty so it is a very good show,” said Ms McNulty.

On stage there will be 60 transition year students. They are supported by another 40 between backstage, building crew, painting, costumes, make-up and more. They have been rehearsing three times a week since Christmas and the cast came in every day during mid-term break.

“I am extremely proud of them all. They are carrying on a tradition that is stretching back 22 years in John the Baptist Community School and this musical is going to be up there with the best of them.

“It will be a whole school experience because we have our own orchestra featuring students from the school ranging from first year to fifth year. We have the woodwork teachers making the stage, art teachers running the teams for painting, business teachers are going to have a little shop. It is a real school effort,” said Ms McNulty.

As a lot of tickets have been sold already those wishing to go on Friday or Saturday nights are advised to ring the school on 061 383283.