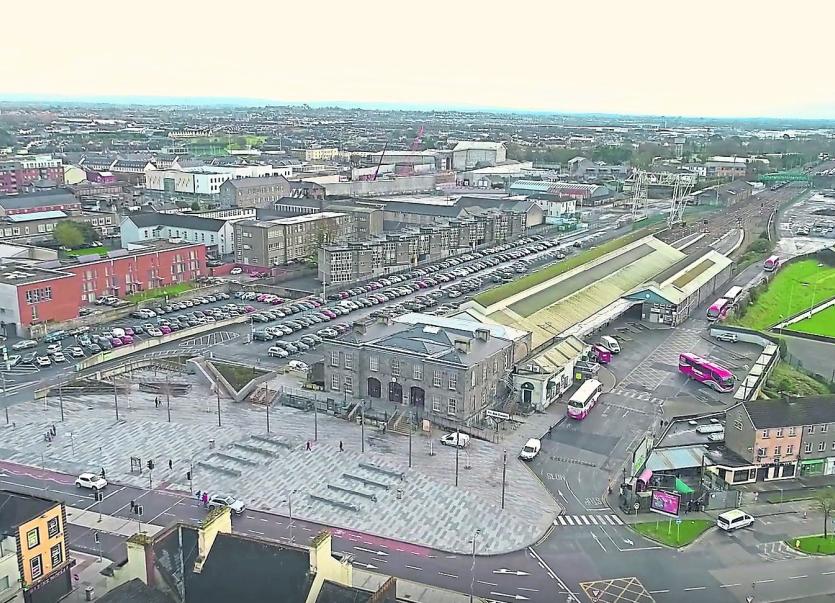 THIS FRIDAY, the public consultation period will end for the ambitious multi-billion euro investment into the Colbert Station development, a project led by the Land Development Agency.

The LDA's John Moran and Sean Golden, two local natives, are calling on all their fellow Limerick citizens to contribute to this major city centre plan, and to help shape and influence its design.

Have you thought about what Limerick you would like to see by 2040?
As two Limerick natives we have our own ideas.

We want to see a sustainable city doubling in scale or even more with people living in new and existing communities with thriving walkable neighbourhoods developing in a way which integrates well with each other. We want to see homes and not just “units”.

As part of our work in the Land Development Agency (LDA) we want though to hear your views. The Colbert Station development, which was recently announced, will see multibillion-euro investments right in the city centre, adding new housing, offices, educational, health and other social services and amenities.

What exactly should be built there? Houses or apartments, new train stations, bike lanes, a new hospital, schools, football fields, outdoor climbing wall, graffiti park, children’s farm, a new museum or cinemas, cars or no cars, skyscrapers, six-storey buildings or semi-detached housing or all of the above?

Public consultations should be two-way flows.
The LDA, in its national remit, wants to do things differently. By incorporating public engagement from the get-go we want to encourage greater collaboration in developing our cities.

But we need people to speak up if they want to influence the design.

The deadline for the first part of the public consultation for the 50-hectares study area around Colbert Station is fast approaching.

The views from the public consultation will shape the design review process which, as a precursor to a master plan, will act as a high-level analysis of what the site could look like in the future.

The LDA and its partners at Limerick City and County Council, the HSE and CIÉ have wondered if a transformative, walkable, affordable 21 st Century neighbourhood could be developed in the heart of Limerick City where people can live, work and socialise. Is this what the people of Limerick themselves want for current and new residents?

A place for starter homes before moving somewhere else, or a home for life?
Should we plan for rapid growth in population (50,000+ by 2040) and should we also adjust for Limerick’s rapidly changing demographics?

According to the Higher Education Authority (HEA), the number of full-time students in Limerick has grown by approximately 3,800 from 2011 to 2017. This could grow by another 4,500 by as early as 2024 if the same growth rate is applied.

What type of accommodation and communities should be built for part-time and full-time students?

What models of homes, facilities and transport infrastructure? Should we plan for this in the Colbert area or just provide transport links to other areas of the city? What can we do to encourage our students to live in Limerick long after they have finished their studies?

What should we plan for better age-friendly accommodation with services within walking distance? There must be a better answer than right-sizing to a nursing home.

Isn’t it about time we disrupt the housing mix and lived more sustainably?
To remain resilient in the face of climate change imperatives, Limerick could be a real 21st Century city with 300,000 inhabitants within the existing city footprint. But what would this mix look like?

Since independence, Ireland has a history of building housing estates in suburbs or one-off housing surrounding cities rather than high density homes in the city centre. Limerick started even earlier than that once the development of Georgian Limerick was aborted with low density housing close to the city centre. This means unhealthy increased reliance on cars and long and frustrating commutes for people on their way to work and dropping children to school.

Is Limerick ready to lead by challenging these norms and supporting high quality density in the city centre, following the success of European examples such as Copenhagen, Amsterdam and Barcelona?

From the 2016 census almost one quarter (23.5%) of Irish households were single person households. Three-bedroom houses do not cater well for these people. Examining the social housing list for Limerick City and County in 2019, 50.2% of people on the waiting list are single person applicants.

Can we recommend high-quality apartments that would use our city centre’s limited space more effectively than three-bedroom houses can?

Is Transit Oriented Development (TOD) the answer?
TOD involves developing vibrant, compact and liveable neighbourhoods where people can walk between their homes, their workplace and their social activities and benefit from high quality public transport.

A good example of TOD is one where inhabitants aren’t laden with the expense and need of having a car. The AA says the average annual cost of running a family car is almost €11,000.

Is Limerick supportive of the idea of developing neighbourhoods where inhabitants don’t need a car?

What facilities are required in Limerick to make TOD a success? How can better public transport play a role? Is it time for Limerick to invest in a suburban rail system or will protected cycle lanes work in the interim?

The case for community, scale and ambition

Great cities comprise of interconnected neighbourhoods, each with its own distinct vibe and feel. What do we need to do to build a sustainable affordable community for Colbert? A site of this size requires expanding our thinking and ambition to achieve a scale of development like when Robert Pery developed Newtown Pery’s Georgian quarter.

What do Limerick’s ambitious inhabitants see in the new neighbourhood? What does community look like to you? What should this site have? How should the neighbourhood interact with the older neighbourhoods which surround it? And with the villages and towns in the rest of the county and the Mid-West?

In short, we need your help to imagine what people should see as they arrive by bus or train to Colbert Station and when they step outside into this new Limerick. We want to put forward the right ideas when we are asked next month – so please give us your views and help us to design and build the right kind of city centre that will serve us all for generations to come.

The public consultation is open until 5pm on the 28th of February (Friday). Email submissions of 500 words or less should be sent to limerick.colbert@lda.ie.

Sean Golden is an economist with the LDA

John Moran is chairperson of the LDA