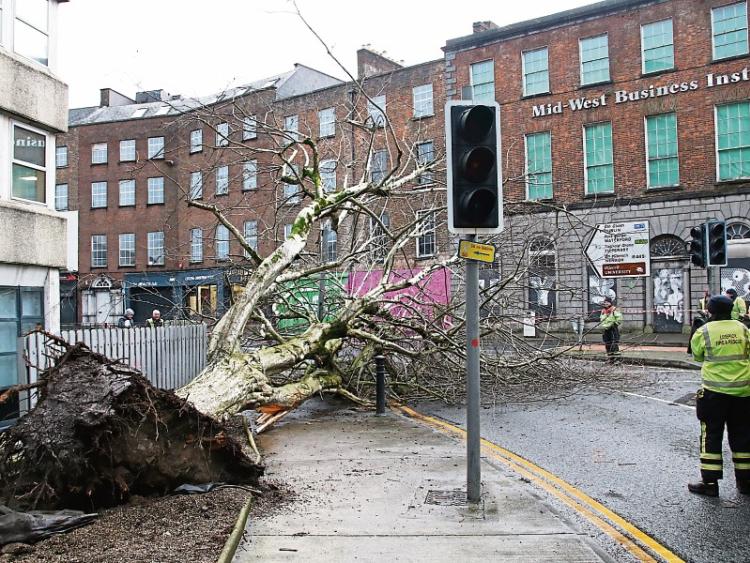 A NUMBER of large trees have been removed from a location in the city centre following an incident last week when one fell into the road due to high winds.

The Office of Public Works (OPW) has removed 13 trees from outside Sarsfield House, Francis Street, with calls being made to legally protect such trees.

On the afternoon of Monday, February 10, the city’s fire service attended the scene of a fallen tree on the premises, with traffic diversions put in place as the tree had fallen across the footpath and into the road.

Matthew Bridge in Limerick City was closed to outbound traffic in the direction of Corbally for a short period of time, while Francis Street was closed until approximately 6.30pm.

No cars or people were involved in the incident, which occurred during a nationwide Status Yellow wind warning, referred to as Storm Ciara.

The newly-elected Brian Leddin, Limerick’s first Green Party TD, took to Twitter to express his disappointment that the rest of the trees were being removed.

“Sad to see the fine trees by Sarsfield House all cut down by the OPW after one tree fell over the weekend,” he said this Tuesday, “we need legal protection for significant trees and a commitment from public bodies that they will consult before felling where there is not an immediate risk to public safety.”

A council spokesperson said: “Limerick City and County Council is not carrying out any work on trees at Sarsfield House, however the council was involved in the removal of two of the trees that fell during previous storms, the latest during Storm Ciara.”

An OPW spokesperson said: “Following a recent incident the OPW decided to organise a survey of the remaining thirteen trees in the vicinity as a matter of urgency.

“This assessment stated that the remaining trees had outgrown their available planter bed space, and periodic drought and waterlogging of the planter beds had made them unstable. The tree root zones were also erupting the hard landscaping and pavement infrastructure, posing ongoing health and safety issues.

“Following OPW consultation with an ecologist, landscaping contractor and National Parks & Wildlife Service, it was decided to remove these trees. Each tree was inspected before felling was allowed, no bats or birds were present within them. It has been decided to plant appropriate new trees and shrubs incorporating decorative stone gravel and hard surface reinstatement with new paving at damaged areas,” it was added by the spokesperson.