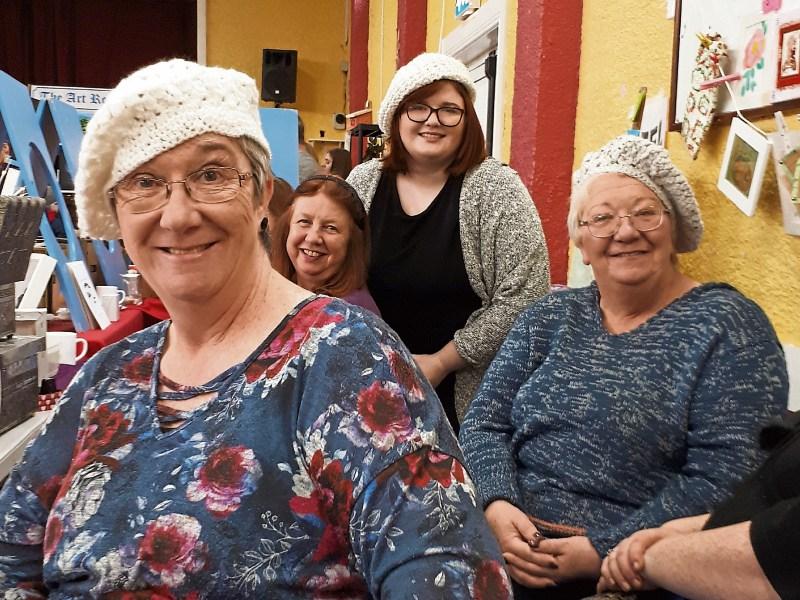 MORE than a decade after they first came together as a group of artists, the Deel Art Group is still dreaming of a permanent home.

But now, as plans to reboot the town are being drawn up, at community and council level,  the group is making its pitch again for a dedicated space which they believe would have a  very positive impact in the community.

“We are looking for a place we can call home,” Martina McCarthy declared this week.

“We have been promised three buildings in the last ten years,” Anita Guinane, a leading member of the group explained. Happily, for them, over the past few years, the Askeaton Civic Trust has kindly  made space for them in their building in the West Square, where the group meets and where it has developed an art and crafts room. But that arrangement is only temporary.

Back in 2011/2012, the group  narrowly missed out  on their original plan to restore the first floor of the Carnegie Library building and transform it into studio and work spaces. The project had been costed at €20,000 and the group had fund-raised €5,000 as their contribution to the project.

“We missed the boat by the skin of our teeth,” Anita said. “If we had known, we would have done things differently. Unfortunately, the recession finished us off.”

Now, to their dismay and astonishment, they have been told the same project could cost €150,000. They are understandably taken aback by the size of this figure and by the enormous jump and are anxious to establish how it has been arrived at.

But they are adamant it would provide a good focal” point  for local and visiting artists and craft workers and for community development through art.

“We are very community minded,” Anita stressed. “In our own, small way we are trying to do our best. We want it to be a community based space.”

“It is all about social inclusion,” added Trisha Power.

Having a dedicated space would “mean everything”, declared Martina McCarthy, who, like many of the group members, came to art later in life. Her “art family” has been a huge source of support for her over the past year, she explained, as  she has been dealing with a cancer diagnosis.

An arts space, she enthused, would be a place to meet,, to do things or talk about ideas, and to get support.

That arts space, members are agreed,  would also be of benefit to Askeaton Contemporary Art, the annual festival curated by Michele Horrigan which gets significant funding from the Arts Council and is supported by Limerick City and County Council,

While the group’s aim of a dedicated arts space has been included in a new town plan being drafted by the Askeaton Community Council, group members have been concerned by recent reports about the condition of library building.

At a meeting of Limerick City and County Council last month,  local councillor Kevin Sheahan called for an indepth investigation, including an engineer’s report, on the library building in Askeaton. He was, he told the meeting, shocked at the condition of the building, with slates missing from the roof and water coming down the walls.  He had been told, he said, that there were “first class libraries” in Adare, Foynes, Rathkeale and Dooradoyle and there was “no justification” for extending Askeaton and recalled that a proposal to buy a site next door and extend the library had been turned down.

His concern was that this, coupled with the state of the building, would provide an excuse to close the library altogether.

The library is hugely important to the town, members of the Deel Art Group insist. They want to see it flourish, and believe an arts workspace upstairs would complement it.