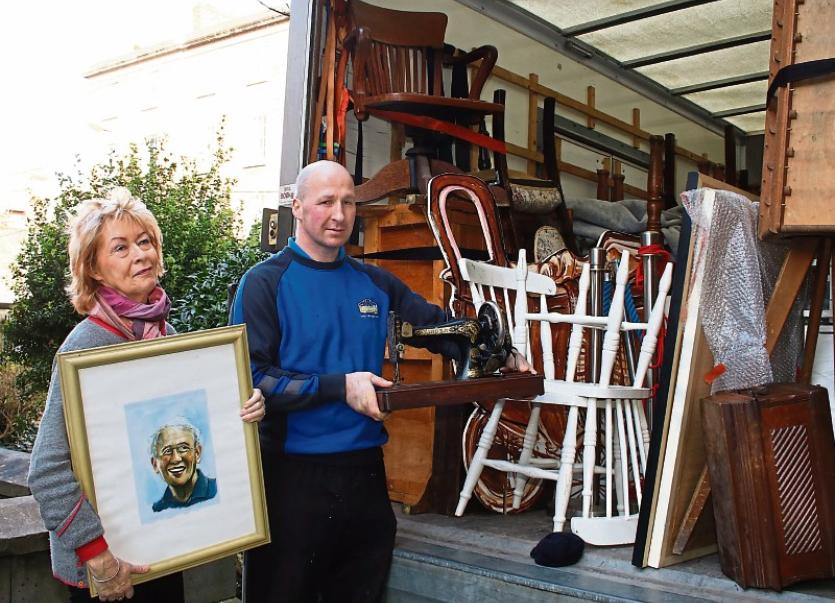 Una Heaton and Mike Lynch, from Smart Movers, loading the museum exhibits on to a truck - Picture: Adrian Butler

THE FOUNDER of the Frank McCourt Museum has said she is “heartbroken” as hundreds of artifacts were taken to auction this week as the attraction closes its doors after ten years.

Despite her devastation, Una Heaton, who curated the museum, plans to write a book about her experiences in the former Leamy School on Hartstonge St.

It was announced in September this year that the museum would permanently close due to a lack of regular funding, with key personal items of Frank and the McCourt family being transferred to a new exhibit in the People’s Museum in Pery Square which is set to open in the near future.

“I’m just heartbroken,” Una told the Limerick Leader this Tuesday, “I can’t believe today is the day it all leaves. All these memories, gone.”

Remaining artifacts of the Angela’s Ashes author are being auctioned off on February 18 in The Auction Rooms in Sixmilebridge, with Una revealing that any proceeds will go to children's charities.

The decision to close the museum was due to Una no longer being able to afford the rent, rates or insurance after she claims that Limerick City and County Council failed to support the attraction.

“I’d 7,500 emails from all over the world begging me to keep it open, and some of the messages were heartbreaking,” Una added, “people were coming back to see it one last time, but that’s it. It’s closed, it’s gone.”

In December, Frank’s wife Ellen McCourt paid a visit to Limerick to donate selected items to the new exhibit just around the corner - including the ashes of her late husband who passed away in 2009.

“I couldn’t be here when the ashes and his personal belongings were taken out,” continued Una, “it was like vultures coming in. Of course, it wasn’t mine to keep.”

Speaking of the new exhibit, Una said: “I don’t want to go in there and see it, it’s too raw for me right now. I might do eventually, I’m happy something has been done to keep him in Limerick in some small way but it’s not the same for me.

“This is Frank’s building, his spirit is in there - I can feel it. Every time I come in I can feel his presence there.”

Una claims she is halfway through writing a book, titled I’ll Be Frank, about the story of the museum, and plans to include a chip of the building with every copy.

“I didn’t really know what the museum was going to be when it started,” Una said, “but when people started coming, that’s when I knew just how important it was to people. I thank all those people for their support.”