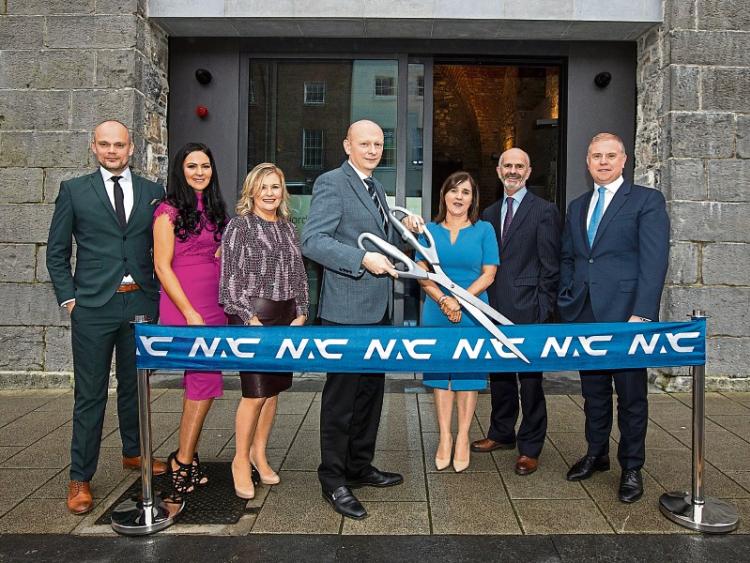 THE Chief Commercial Officer with Nordic Aviation Capital (NAC) which recently relocated its Limerick headquarters to the Gardens International development in the city centre says the move will allow it to further expand its workforce in Limerick if required.

The company, which is the world’s largest lessor of regional aircraft, is the sole tenant of the former Hanging Gardens which was redeveloped by Limerick 2030 at a cost of almost €18m.

The building, which encompasses 112,000 square feet across five floors, was built to LEED Gold standards – making it the most advanced office development outside Dublin.

Speaking at an event to mark of the official opening of the iconic premises, Jim Murphy CCO, said he’s thrilled with the new headquarters.

”I don’t think we have a fault with the building. It has taken a long time to get here and we have spent a lot of time and some money on it as well to make sure we could get it as comfortable as we can. We moved in here just before Christmas so we are here a couple of weeks and everything has gone very smoothly and we are very happy,” he told the Limerick Leader.

“Morale was always good but if you look at the buzz in the canteen at lunchtime it’s really good now and we are trying to build a community here so, yeah, it’s all good,” he added.

Mr Murphy said NAC has added to its workforce considerably since first establishing a presence in Limerick in 2004 and that the new offices will facilitate further expansion if needs be.

“We have 90 people here now and it’s kitted out for 130 and that’s low density and even then there are still some areas that you could convert. You could convert the meeting rooms back into offices for example,” he said adding there was just 20 staff based in Limerick when he joined the NAC in 2004.

Mr Murphy set up the Limerick office in 2004. He was the first employee in the office.

The official opening of the Garden Internationals headquarters coincided with the addition of the 500th aircraft to the company’s global fleet.

“Reaching a fleet of 500 aircraft is a significant milestone for the business and this, combined with our recent move to Gardens International,  will enable us to realise and fulfil our future plans for the growth and development of NAC,” said CEO Soren M Overgaard.

Jim Murphy says the opening of the headquarters will provide people in the region opportunities that may have only been available in Dublin before.

“We have a lower cost here and that’s what is attractive to people in Dublin. Some people have done their time in Dublin and want to do come back. This building will massively help them,” he said.