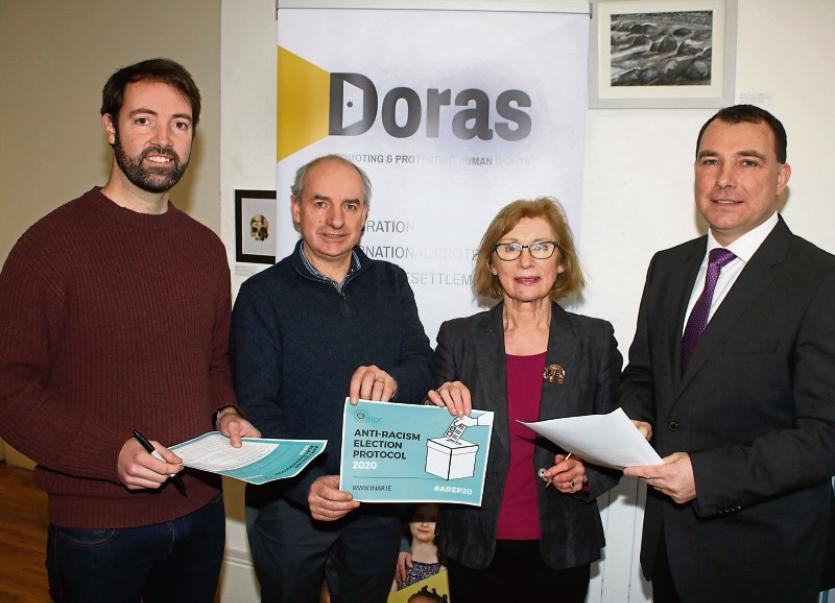 FIVE Limerick city election candidates have signed an anti-racism document to pledge that their campaigns are free of any form of racism, hate speech and discrimination.

This Tuesday, all of Limerick’s candidates were invited to sign the Anti-Racism Election Protocol 2020, which was produced by the Irish Network Against Racism (INAR, formerly ENAR Ireland), of which Doras is a member.

Jan O’Sullivan TD said: “I think it’s really important that people running for office would be very clear in relation to anti-racism. There should be no doubts whatsoever, and we should be extremely careful in the language we use, that we’re inclusive and so that nobody is in any doubt whatsoever as to where we stand.

“I also think we need to call it out if we meet it, there is now more and more racist speech on the doorsteps, blaming others for problems we have in society. We need to explain why that’s just not the case. We have a duty, you can’t speak out both sides of your mouth on matters like this, the pledge is to be implemented and not just signed either.”

James Collins said: “There're many people in Limerick who consider it their home, and they may have not been born in Limerick. Last year the Integration Strategy was launched here. Our society is changing, we’re becoming multicultural. Limerick was a walled city for many years, and I think we need to metaphorically tear down those walls and welcome people into Limerick.”

“We live in such a diverse society, and it’s important that we embrace that diversity. Nobody should live in a place where their background is an issue that hinders their potential, it’s as simple as that. We’re very happy to support this pledge here today,” said Cllr Brian Leddin.

Finally, Maria Byrne said: “It’s vital that all citizens – regardless of race, colour, nationality, sexuality, religious belief or ethnic origin – are protected from hate and prejudice.”

Donna Vuma, Doras’ policy officer: “This is so important. We’ve seen such a rise in the far-right and such unsettlement in the communities surrounding hate. It’s vital to send out that strong message that we’re human beings, and deserve to be treated as such.

“Doras’ manifesto has called for an end to Direct Provision but also to reform the international protection system as a whole. That needs to be more human-centered. Regarding the recent closure of Mount Trenchard, it wasn’t just that centre that was problematic - the whole system is problematic as a whole and it needs to be abolished.”

John Lannon, Doras Director said: "We are not discouraged by the numbers of candidates signing yesterday as, like much to do with this election, notice was short, and candidates are understandably busy canvassing.

“This event can be seen as the launch of the anti-racism protocol in Limerick - our door is open, and all candidates are encouraged to come in to sign the protocol, committing to a campaign free from racism and hate speech. Many parties as a whole have signed up, and hopefully candidates here can reinforce that by making time to sign,” he added.