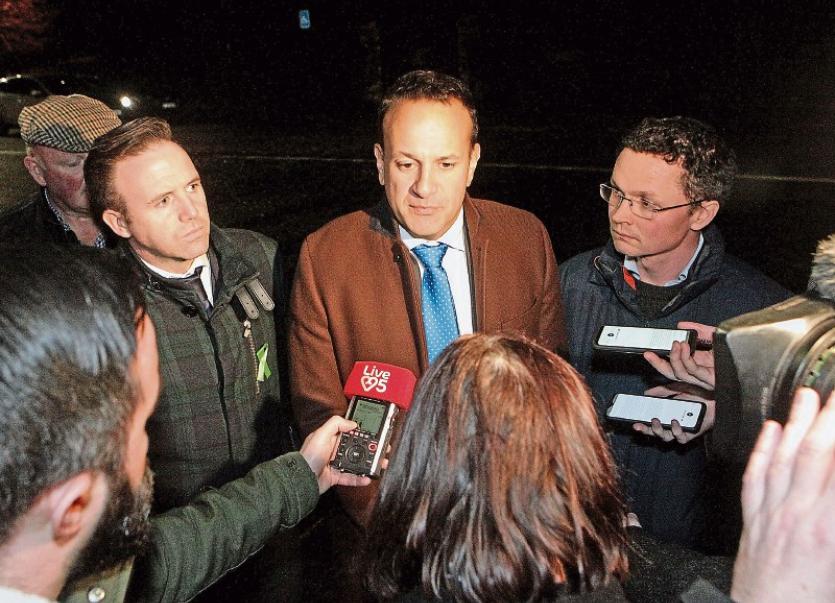 IN his first, and what could well be his only, visit to Limerick County in this very short general election campaign, Taoiseach Leo Varadkar struck a very relaxed and confident note when he arrived in Adare, looking composed and fresh after a hard day on the canvass trail in Co Cork.

At well past 6pm on a Tuesday evening, he might also have been hoping that, unlike in Co Cork,  no strident voter would jump out of the Heritage Centre bushes to yell “Thatcherite” at him.

In the end, it proved almost too quiet, with nobody on the street and  just a group of smiling Young Fine Gaelers and older party members turning out to accompany him on his walkabout. Not forgetting, of course, the pesky media. We crowded around him. What about UHL? What about pensions? What about rural Ireland?

And, even after a day of the same old questions, asked time and time again,  he answered them all with great politeness. With superlative courtesy, if truth be told, until, of course, he was whisked off to do what he was really there to do: to build support for a Fine Gael return to power and to persuade people to vote for his two party deputies, Patrick O’Donovan and Tom Neville.

Mind you, for all the votes that were there for the winning on Main St, Adare on Tuesday evening, the two deputies might have been better knocking on doors in Deerpark or in Desmond Drive.

A scoot around Lena’s bar, a few photo opportunities and we were off up the road again to the Centra supermarket where Leo was told in no uncertain terms: “The A&E is like Beirut. It’s an absolute disgrace.”

So quietly spoken, few but the Taoiseach could hear her, Mary O’Donoghue said her piece and was determined to do so. From Adare, her husband had spent 11 days on a trolley in UHL earlier this month before getting a bed, in Ennis!  And now, she was spending hours a day travelling from their Adare home to the hospital just to spend time with him, she explained.

“I asked him to reopen the A&E in Ennis, in St John’s, in Nenagh,” she said. But she told the Limerick Leader: “It is not going to change. All I can see is making room for more trolleys. They don’t have the staff.”

Earlier, the Taoiseach had expressed his “profound regret” that so many people at UHL, and in other hospitals around the country, had to experience the consequences of overcrowding, whether as patients, relatives or staff.

“There are a lot of solutions,” he said, “But one of the mainstays of those solutions is adding more bed capacity to our hospital system. That is what we are doing. As you know, there is a new block which will open this year. As well as that there is another 96-bed block which needs to be built too.”

“People can believe us that we are going to be the ones to deliver on that as opposed to a previous government, which was the one,  let us not forget, which took hundreds of beds out of our hospital system and took the A&Es out of Ennis and out of Nenagh without providing the additional bed capacity in Limerick which was always needed.”

On pensions, the Taoiseach accepted there was an anomaly there and people who were required to retire at 65 before the state pension kicked in didn’t want to have to sign on. “We hear that. We get that. We accept that is a problem,”he said.  “I don’t make policy on the hoof,” he continued but said Fine Gael was working on the details of a transition payment which would be the same amount as the pension.

He defended the need for a motorway linking Limerick and Cork, pointing out he had been in Buttevant and Charleville earlier in the day, both heavily congested towns which needed to be bypassed.

And on the issue of the survival of small towns and villages. he said: “One thing we shouldn’t do. We shouldn’t do down our villages and parishes in rural areas. There are more people living in rural Ireland since the foundation of the state, more jobs in rural Ireland than at any time since the foundation of the state. That is true in Co Limerick as well.”

“One thing we can do to make things betters is to continue to roll out our rural fund, €1bn  in that fund, particularly for town and village improvements,” he said, adding that we are now starting to see the benefits of that. “We need to go ahead with the National Broadband Plan because if rural Ireland is going to have a 21st century future, we need broadband. That is how businesses are going to create jobs in the future.

“That is how we are going to have more home-working which in some ways is the decentralisation of the 21st century.”

“That is why we need to make sure we don’t have a Fianna Fail government because they are the ones saying they will tear up that contract and take away Ireland’s 21st century future.”

But he added , more could be done to repurpose old buildings.

Later, on the walkabout, a second Adare woman, chatted away to Leo as Gaeilge while he nodded his head  gamely and tried out his improved Gaeilge on her. She wanted Irish at second level to be taught like French, she said, with the emphasis on conversation and not on literature. The Taoiseach, we think, agreed.

But then it was off up the street again, a quick run around Collins, a quick drink and off back to Dublin.