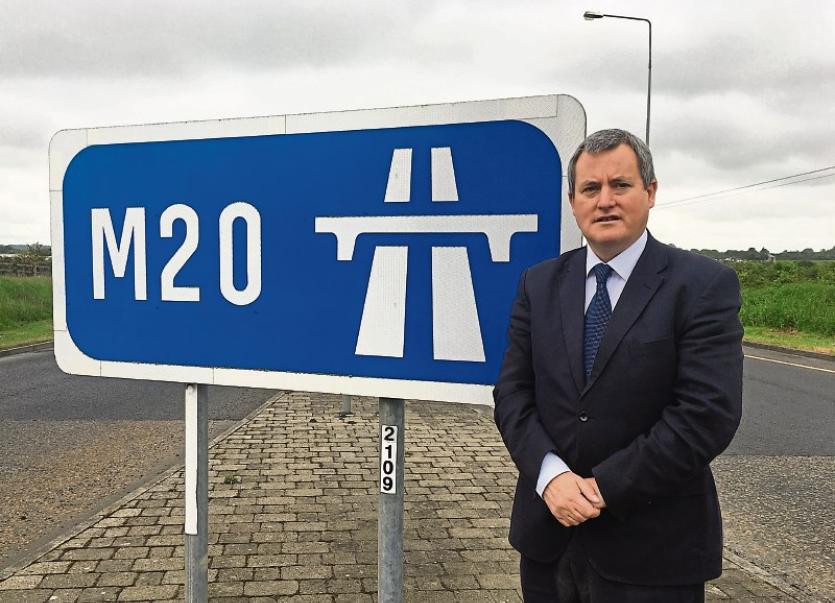 THERE has been a huge backlash locally following comments from Green party leader Eamon Ryan over the Limerick to Cork motorway.

Speaking on the €1bn project, which will link Ireland’s second and third cities, Mr Ryan said he believes the link would “make no sense”.

He believes the future of transport in Ireland is rail – and said the M20 will not work.

“I’d far prefer to invest in the rail systems in both Cork and Limerick,” he told Newstalk Breakfast, “If there is a need for an upgrade to the Cork-Limerick road system, I think it’s far better and cheaper to do it if you join the existing N7 and allow for traffic to work that way.”

But Senator Kieran O’Donnell, who is running for Fine Gael in the election, said Mr Ryan and the Green Party “show a distinct lack of understanding of what is required for balanced economic regional development.”

A long-time campaigner for the project, he said public transport reform and the M20 are “integrated”, and “it’s not a case of one or the other”.

“Yes, we need an enhanced rail and public transport network. That’s why we have strategies in Cork and Limerick. Clearly Eamon Ryan is unaware of these,” Mr O’Donnell added.

He also pointed to a study from the Limerick Chamber which shows that up to 5,000 jobs could be delivered, and would bring around €126m to the local economy.

“The Greens are talking about being able to run a country, but if you do not understand the dynamics of how you put an economy together, and one of these is to have the two largest cities outside of Dublin linked by motorway. We cannot have a situation where the current N20 is unsafe, and takes a huge length of time,” he told The Leader.

Mr O’Donnell declined to say whether the long-awaited motorway could be a red-line issue in potential governmental negotiations with the Greens, who could be a coalition partner to the two biggest parties.

An Tanaiste Simon Coveney, a Cork TD, also urged Mr Ryan to spend more time in Cork and Limerick to understand the need for the M20

Speaking outside Thomond Park, he said: “We are trying to create a counter-balance to Dublin in the south and south-west. Strategically linking Limerick and Cork, ensuring you can drive between the two in 45 minutes as opposed to an hour and 20 minutes. It’s also good from a climate perspective. It means less time on the road in your car. If we can get one million electric cars on the road which do not need to charge between Limerick and Cork, then we can do what is important for the environment.”

Labour TD Jan O’Sullivan says while the Green Party are right about many things, they are “wrong” on the M20, saying the plan has been “long-fingered for long enough”.