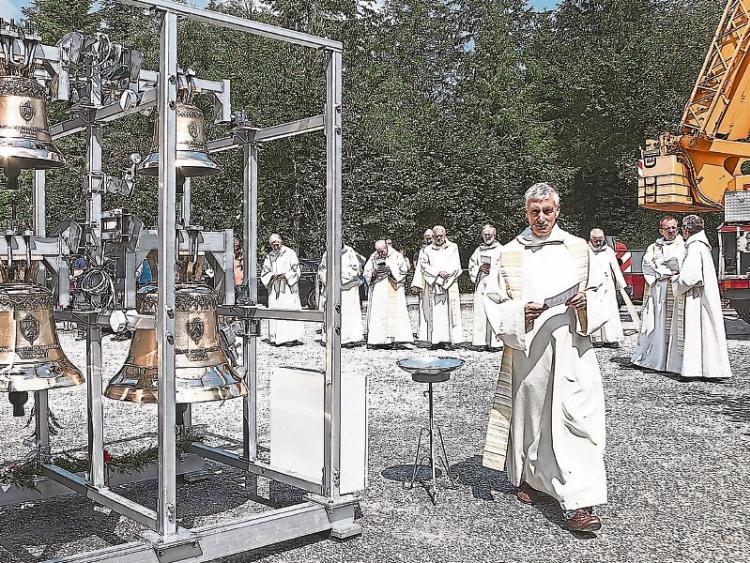 Last week, the Glenstal monk spoke about his depression, spending three months in Saint John of God Hospital and his recovery. However, despite the pain and misery Fr Simon said he wouldn’t swap the experience for “anything”.

This week he discusses why so many others, like him, are falling into what he calls a “dark hole”.

Ireland has one of the highest rates of mental health illness in Europe, ranking joint third out of the 36 countries surveyed in the annual Health at a Glance report.

“The human brain is complex and tricky to manage. If you let the mind run on its own it goes negative 80% of the time,” said Fr Simon.

But that makes sense to him. The reason the brain has a factory setting of negativity is survival, he says.

“Look at anxiety. We tend to think of anxiety as a bad thing but the humans in the wild that didn’t have a certain degree of anxiety didn’t survive. That was our way of life when we lived in tribes of 150 in the Savannah. In evolutionary terms that was five minutes ago. To me anxiety is a natural response or a signal about something being wrong.”

The former headmaster of Glenstal Abbey school uses a rabbit as an example.

“If the cautious rabbit sees the fox coming they react immediately, are stressed and jump in the burrow. Five minutes later they are back out nibbling grass. The rabbit has forgotten about the fox.

“The problem for us with our minds is we don’t forget. We think the fox is around the next corner and we play it over and over in our heads. We put ourselves constantly under stress.

“We are so caught up in our minds. The last bit of evolution provides us with this consciousness but the lizard and crocodile brain - all those steps of evolution - are all still there. They haven’t gone. That is all driving us too. That is part of our machinery.”

“There were no tigers or lions around my bed. I was anxious and fearful and not functioning as I would normally expect to function.”

We don’t have any wild animals preying on us anymore but we have lost a lot of what was good about living in tribes in the Savannah, he says.

He says our society has created increasing disconnection. Exteriority trumps the interior and image has supplanted substance.

“There are many ways to lose one’s sense of self. We can lose ourselves trying to control the world around us, in unhealthy relationships, in perfectionism and the list could go on. In the past we were told that our first parents, Adam and Eve, had messed up - they had fallen from perfection by eating that apple and we were suffering the consequences - we had to become perfect and this ethic of perfection has dominated Christianity.

“Even if the popularity of organised religion is on the wane, perfectionism hasn’t gone away but the story has changed - it is no longer about having fallen from past perfection but about striving for future perfection, and influences much of what we do, from the search for the perfect partner, the perfect house, the perfect kitchen, the perfect body to perfect sex. This striving takes us dangerously outside ourselves as we attempt to conform to an external standard of perfection which is an illusion. There is no perfect home, kitchen, body, or partner.”

If we are to halt the ever increasing rate of suicide and depression especially among young people we need to rebuild connections, he says.

“Not only have we become disconnected from ourselves but also from nature, from the sacred, from life-giving values, from community. All we are left with is consumerism - worshipping false and empty gods - idols. Some wise person once said to me, if you want to be happy, get connected. It is a simple phrase but holds great truth.”

The 68-year-old can remember threshing. A time when a great machine drawn by a steam engine arrived in a locality for all neighbouring farmers to do the threshing of their barley crop before moving on to the next farm.

“I was very young but remember the sense of community and joy that enveloped this event. Today we need what someone has called “weavers”, weavers of community.

“The GAA is a very successful weaver of community, as are the scouts. The most surprising experience of weaving for me has been the Team Limerick Clean-Up initiative launched by JP McManus. Who would have believed that litter could unite a community even just for half a day? No one can be against it or opposed to it. The first year it happened it was like a miracle. No one was excluded, it united all. We need more weavers if we are to survive and live healthier and more fulfilled lives.”

Fr Simon says our celebratory, consumer culture with its “junk values” is not interested in the health of our inner self.

For most of Fr Simon’s life he was taught to look for answers outside himself - to books, to people, to religion.

“My religious upbringing was about the external - being virtuous and devoting myself to the person of Jesus. I was warned off having anything to do with the inner world - that could lead to self-indulgence or narcissism.

“My education too was focussed on the external - on behaviour and results. There was no attempt to teach me about my mind, my psychology or emotions or anything to do with my inner world. It is not surprising that people are flocking to Eastern religions - they know about the inner life and how to manage it. While we are busy concentrating on the external, they are focused on the internal.

“The sad thing is that the Catholic Church has all the resources to provide for both the internal and external needs but is choosing not to use them. Our culture too, is very much focused on the external and takes us further away from ourselves - it depends on us feeling disconnected, empty on the inside so we keep buying, trying to fill the hole we feel inside and keep the economy growing.”

It is something he experienced himself when he was in Saint John of God.

“You could visit Stillorgan village once the staff felt you were not a risk to be let out into the wider world. During that time I became an avid consumer. I visited Stillorgan and never came back without buying something and was always disappointed when I got it. The same old story - I knew it well. It is always the anticipation of buying that gives us the buzz - releases the happy hormone, dopamine. And then the let down.

“I knew I was still on the run, treating myself like someone I didn’t want to spend time with  - anything but sitting still by myself, doing nothing. And I am meant to be a monk - someone for whom this should be second nature - and not succumbing to filling the ‘God shaped hole’ with busyness or with stuff.  And if per chance God did come knocking on my door, I would probably be absent, out buying another spiritual book.”

Research is showing that your pain may not be all your own - it may be inherited. However, Fr Simon’s depression rose from within.

“I had weakened my sense of self over time - disconnected from myself. I was afraid of my father and abandoned in boarding school at a young age. One will never know the exact cause or causes of one’s issues. And everyone has them. As someone said, ‘There are two types of people, those with issues and those that are dead’.

“But I had developed a way of surviving which was more about pleasing other people and looking after their needs rather than my own - when you give priority to making others happy at a cost to yourself, it becomes unhealthy. I hid my loss under busyness and work. But inside I was in pain.”

He searched everywhere and for ages trying to understand and release this pain.

“I imagined myself living in a submarine and keeping my eye on the world through a raised periscope. I went to therapists, I read more self-help books than is probably legal. I made mistakes, some big ones and went down false trails.”

Fr Simon wishes to acknowledge the love and support he received from his community in Glenstal and from his friends and family, and to everyone who has reached out following last week’s article.

“When I left hospital I, and others, assumed I was ‘fixed’, back to my old self. I had ‘come home to myself.’ But I was wrong. The hospital had reset my system. I was no longer depressed or over anxious but I was not ‘fixed’. It was a psychologist friend of mine, Tony Bates, who said to me, “now the work begins”. And he was right.

“I was fortunate that I did not have to go back to the situation I had left. The job [headmaster] was gone and I had a welcoming community to slip back into, I changed my living space. Many others are not so fortunate - they have to return to the situation that caused the problem in the first place. And when you return, people expect you to be ‘fixed’, and ready to go on as before. But you can’t go back to that self or you will be in trouble again. You have to change and re-set your priorities.”

But what is the work?

“It is about reclamation - reclaiming one’s self or a part of one’s self that was lost beneath the waves of daily survival. It means changing things in your life - it is a unique journey for each of us. But it is one we have to go on if we are to find a meaningful and fulfilled life.”

At a practical level, there are things Fr Simon does to ensure he doesn't fall into the “dark hole” again.

He tries to sleep well, eat well, not drink too much. Saint Benedict generously allows each monk a hemina of wine a day which is roughly half a bottle.

“I exercise and try to loosen up and play at some point in the day. Humour is a great healer and play is also important even for adults. I meditate or spend time in quiet for 20 minutes twice a day. I came across a helpful description of meditation which has changed my approach. It suggested that you don’t ‘do’ meditation rather you ‘go’ for meditation. It is like going for a massage - you don’t do anything except show up. You stop trying to control your world and sit, and let the Spirit work. We need to learn to manage our complex and tricky brain.”

But while we must mind ourselves no man is an island.

“And now for the first time I feel I have got a glimpse of what it means to feel a freedom and sense of self. It is fragile but it is real and needs to be minded.”