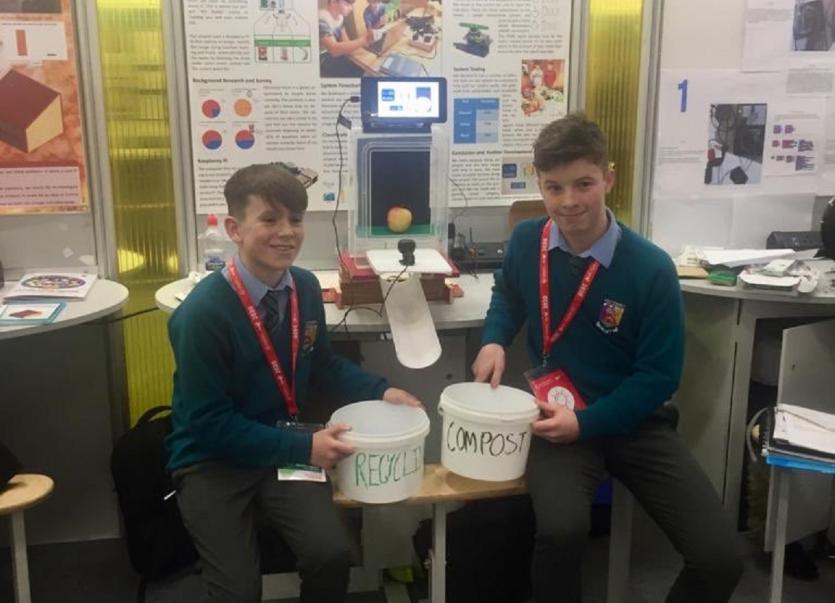 STUDENTS from Limerick showed off their scientific talents by bringing home eight awards in the BT Young Scientist and Technology Exhibition.

A total number of 30 projects represented Limerick at the exhibition this year.

Cathal O’Mara and James O’Malley, both aged 13, are first-year students at Castletroy College. They came runners up in the group award for their project entitled ‘Bin Buddy – A SMART Sorting Bin‘. The students were in the Technology category at Junior level.

Orna Collins, also from Castletroy College, came second in the Chemical, Physical & Mathematical Junior Individual awards fro her project "A Plastic for Our Planet – Toward a Sustainable Biodegradable."

Caitlin Talbot, from Mungret Community College, came third place in the Social and Behavioral Junior Individual category for her project "To investigate the attitudes of Irish Secondary School students towards global catastrophes."

The coveted prize was presented to them this Friday evening in the BT Arena by Minister for Education and Skills, Joe McHugh TD, and Managing Director of BT Ireland, Shay Walsh.

Shay Walsh, Managing Director, BT Ireland said, “Congratulations to all of our participants, and particularly to all our winners. For more than five decades, the Exhibition has shown the ingenuity of Ireland’s youth, and this year’s Exhibition is no exception. The students at the BT Young Scientist & Technology Exhibition have sought creative and innovative solutions to some of the world’s most pressing issues, and that spirit and drive is to be commended.

“We say ‘Create Today, Shape Tomorrow’ at the exhibition and it really is only the beginning. From the young students involved in The Primary Science Fair to secondary students at the BT Young Scientist & Technology Exhibition, it is vitally important that every student’s voyage of discovery does not end here.”

Cormac Harris and Alan O’Sullivan, both aged 16, fourth-year students from Coláiste Choilm, County Cork, took home the top prize for a project entitled “A statistical investigation into the prevalence of gender stereotyping in five to seven year-olds and the development of an initiative to combat gender bias”.

The winners of the 56th #BTYSTE are Cormac Harris & Alan O’Sullivan, both aged 16, from @colaistechoilm, Cork, for a project entitled “A statistical investigation into the prevalence of gender stereotyping in 5-7 year olds & the development of an initiative to combat gender bias” pic.twitter.com/zJKFipPnLf

The award for Individual winner went to Oscar Despard, aged 17, a fifth-year student from Sandford Park, Dublin, for his project entitled “Applying Data-Driven Experimental Analysis to the Irish Longitudinal Study on Aging”. The student was in the Biological and Ecological Sciences Category at Senior level.