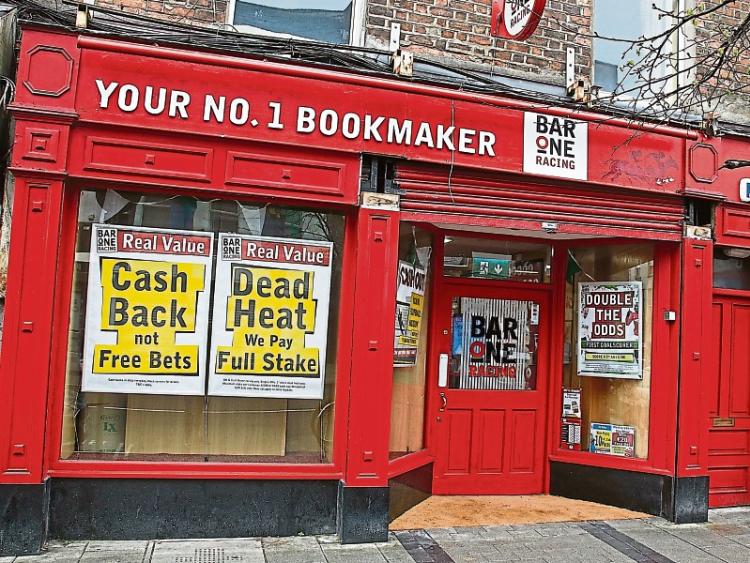 Bar One Racing on William Street

A WORKER at a city bookmakers who was threatened with a garden shears during an armed robbery says her life and that of her family has been ruined by what happened.

While the woman was not physically injured during the incident,  she says she still wakes up in cold sweats and suffers from constant nightmares.

Daniel Braddish, 43, of St Munchin’s Street, St Mary’s Park, Limerick has been jailed for five and-a-half years while another man remains before the court.

Mr Braddish had pleaded guilty to charges of robbery and producing the garden shears at Bar One Racing, William Street on April 8.

During a sentencing hearing, Detective Garda Colum O’Shea said the defendant, who had his face covered with a hooded top, entered the premises shortly before 7pm and demanded money from the female employee.

Mr Braddish, who was wielding the garden shears told her to “open the f****** till,” before adding: “I’ll show you I mean business”.

After the woman retreated and fled to a nearby pub, Mr Braddish jumped the counter and took €455.06 from the till.

Detective Garda O’Shea said the woman was “in serious fear of her life” and that she believed Mr Braddish was going to take money “no matter what”.

Read also: Motorist claims knuckle duster found in his car in Limerick didn't belong to him

In a victim impact statement she said her life has not been the same since and that she still suffers from panic attacks and has lost her confidence.

“I can’t relax, I am constantly checking who is around me,” she said in the statement which was read into the court record by prosecuting barrister John O’Sullivan.

Judge Martina Baxter was told CCTV footage obtained by gardai shows Mr Braddish and another man – Mr X – interacting before and after the robbery.

Detective Garda O’Shea said the pair can be seen buying the garden shears at the Dealz store on William Street a short time beforehand.

He said they can also be seen on the footage swapping clothes before Mr Braddish enters Bar One Racing while Mr X remains outside to act as a lookout.

Following his arrest a number of hours after the robbery, Mr Braddish, who has a large number of previous convictions, made some admissions and identified himself on the CCTV footage.

However, he told gardai he had taken tablets and was off his head at the time.

“If I robbed it, I can’t remember. I was off my face,” he said in one interview with gardai.

Barrister Brian McInerney said his client has lived a “feral lifestyle” and his chronic addiction has been the root of his offending.

“He is effectively a street drug user,” he said.

Mr McInerney asked the court to note his client’s guilty plea and the fact that he did not engage in “ducking or diving of any sort”.

Imposing sentence, Judge Baxter commented the premeditated nature of the robbery was an aggravating factor and that the reconnaissance which was carried out by Mr Braddish and Mr X beforehand was “particularly sinister”.

She said the victim impact prepared by the worker was “very powerful and compelling” and she noted the impact the incident has had on her and her family.