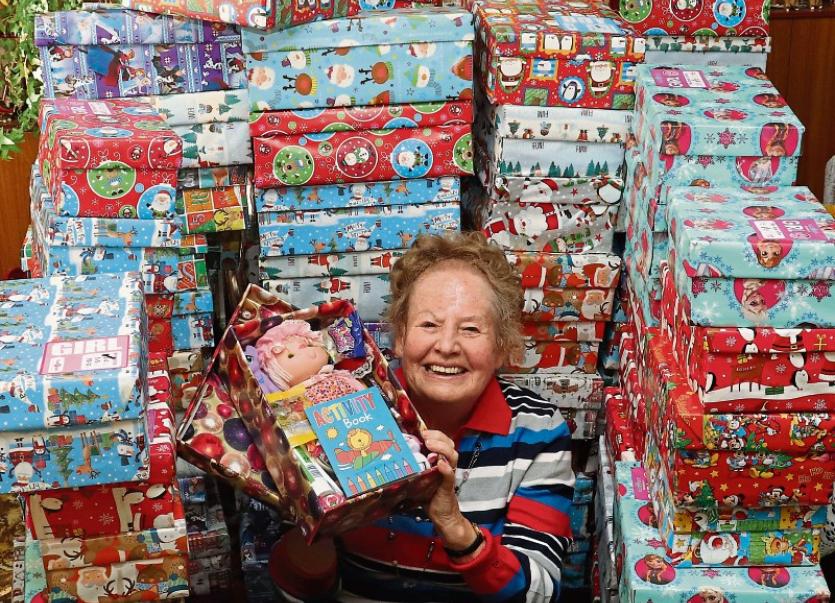 Sigi pictured with her mountain of gifts

LIMERICK’S very own Mrs Claus has outdone herself once again year, as she is set to make 230 children very happy over the Christmas period.

Sigi Murrihy busies herself year on year with making up boxes for Team Hope’s Shoebox Appeal, which are given to children in developing regions of the world every Christmas.

The Caherdavin woman, who is originally from Germany, has transformed her home into Santa’s workshop for the past six years.

“It started up very small with two boxes first and every year I had more - and last year I had over 200,” said 71-year-old Sigi.

This year, Sigi has broken her former record with 230 shoeboxes - each one packed tightly with toys, necessities and stationery.

Though her home workshop may be a one-woman show, Sigi receives help from friends and businesses for her shoebox efforts.

Read also: Thousands of gifts sent with love from Limerick

“People here, when they hear about it are very good. A special thanks to my friends who collect toys for me, without them I couldn’t have it.”

This year, friends and community members have helped Sigi raise €1,000 to be donated alongside the shoeboxes, as each box requires a minimum donation of €4.

“A lot of people were brilliant and so helpful, they saw the article in the paper and I had so many people contact me asking how they could help,” said Sigi, “it was just absolutely wonderful.”

“I received donations from Blue Sea Piscis Hotel, Alcudia, a German shoe business called Stroeber and many many Irish helpers - a special thank you to Aidan and friends and The Curiosity Shop.”

In addition to this, 40 bags of Lego were donated by school children in Limerick, a great help to Sigi who sources many of toys for the boxes through donations.

Sigi receives the boxes from Michael Gleeson’s shoe shop in Limerick city, and the boxes are wrapped by Carmel O’Brien and Mary Tuite.

“I sometimes wonder how I manage it, and I’m very lucky to have my husband,” Sigi said, “anybody else would throw me out altogether, and this year we are 55 years married - and we’re still together!”

“It keeps me going, and it gave my life content,” she explained, “it’s something, and every time I have a box full it gives me great satisfaction.”

Sigi is now taking a well-earned break from her shoebox packing duties over the festive period, and will resume her work in January 2020 when she hopes to reach a new record.