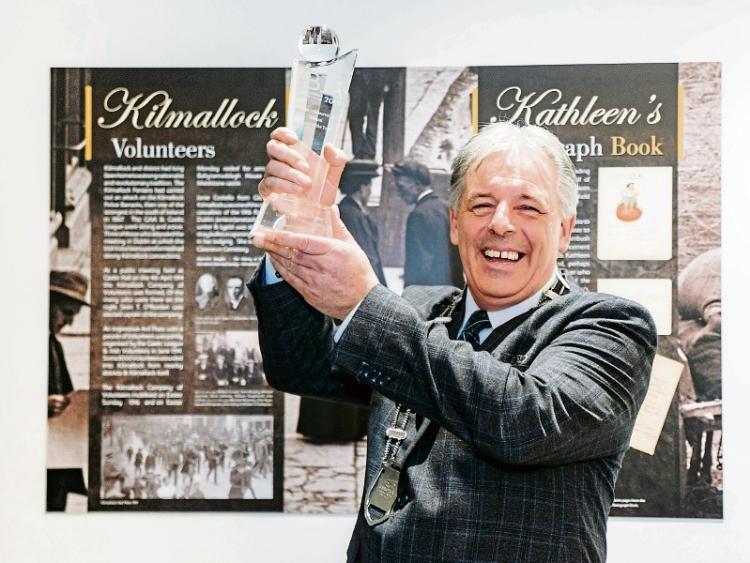 An overjoyed Cllr Mike Donegan with the prestigious national award

PROUD Kilmallock man Mike Donegan looks as happy as if he was holding the Liam MacCarthy Cup aloft.

The cathaoirleach of the Cappamore-Kilmallock Municipal District is photographed with the Irish Building and Design Award 2019 for the Kilmallock West Wall Walkway.

It won the top award for heritage/conservation/ cultural project of the year in a very tough category that included the Pálás Cinema, Galway; Mullingar Courthouse, and Blarney Castle Renovation.

Cllr Donegan welcomed the accolade and paid tribute to the staff of Limerick City and County Council, and, in particular, Sarah McCutcheon, executive archaeologist, for the work carried out on the project which culminated in the prize.

“Kilmallock has a long and rich history and that history became more accessible to a lot more people with the official opening of the West Wall Walkway.

“The original circuit of the town’s defences was 1,700 metres and of this, about 1,200 metres remains standing and the West Wall Walkway became a new thoroughfare for Kilmallock, providing a wonderful amenity to residents and visitors alike,” said Cllr Donegan.

He continued: “The walkway is one part of a larger plan by Limerick City and County Council that will provide a series of linked walks in and around the beautiful and historic town of Kilmallock.”

What makes this project unique is that visitors to the West Wall Walkway will see the same landscape as those centuries ago, as Kilmallock has never really expanded outside its original walled boundary.

In addition there are a further four National Monuments in State ownership, King’s Castle (15th century) which stands astride the main street, The Stone Mansion (16th century), The Collegiate Church (13th century, with an earlier round tower) and the Dominican Priory (late 13th century).

The overall costs of the west wall walkway and the footbridge amounted to almost €900,000, with funding from the Department of Culture, Heritage and the Gaeltacht, the Irish Walled Towns Network, Rural Economic Development Zone, Hinterland, and Limerick City and County Council's own funds.

The trophy was presented at the Irish Building and Design Awards in the Clayton Hotel in Dublin.