Limousin society honours a Rolls Royce of a Limerick farmer 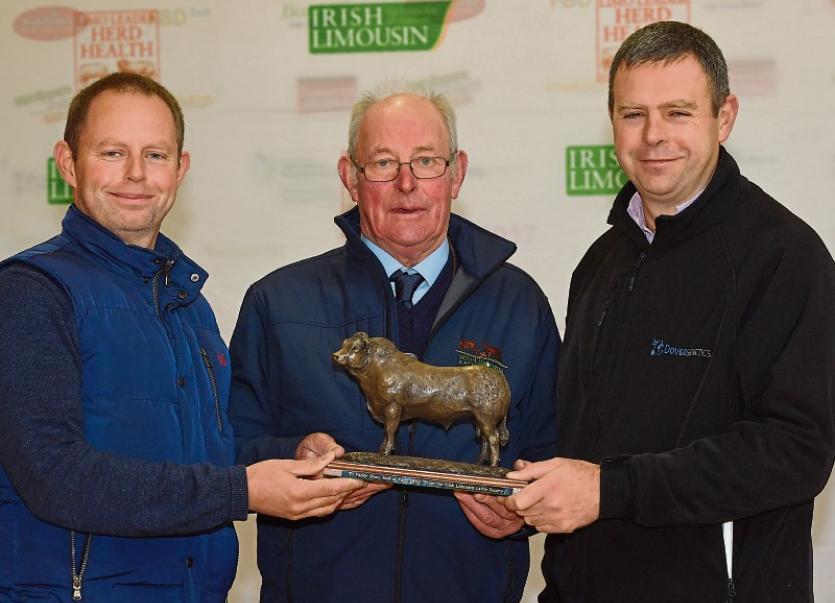 THE IRISH Limousin Cattle Society gave its prestigious hall of fame award to a Rolls Royce of a man.

Paddy Ryan “Luke” received the accolade from Michael Gunn, society president, at Roscrea Mart. Paddy was joined by his wife Peggy, children Ger and Sean, grandchildren, while beloved daughter Helen looked down from above.

The long-serving Cappamore Show secretary’s love of Limousins began when he started crossing the breed with his dairy cows in the 1980s. He saw the benefit at calving and when he went to sell the Limousin calves or store cattle.

One of these heifers sired by Pelletstown Bacchus (PEB) came fourth in Trim at the All-Ireland Limousin Suckler Heifer competition. The Limousin cross Friesian heifer calves formed the basis of his new suckler herd when he exited dairying. The current suckler herd has been graded up over the years using all AI to become a top class commercial suckler herd focusing on producing weanlings for the export market from the herd of commercial Limousin cows.

The Sliabh Felim pedigree herd with his son Sean was formed in 1999 with the purchase of Cave Court Nancy from Kathleen Vaughan, Burncourt, Co. Tipperary. She proved to be a wonderful purchase with her first daughter Sliabh Felim Susie becoming Reserve Junior Champion at the National Livestock Show in Tullamore. She has bred exceptionally well with her name featuring in many of the current day pedigrees from the herd including Sliabh Felim Leo who was Champion at the 2018 Tullamore Show and Sale selling for €5,000.

The other foundation female purchased was Ostie from the Glenisla herd of Glen Devlin in Co Monaghan. She produced Sliabh Felim Ursula who was All Ireland Calf Final winner in Elphin in 2004.  The following year she was selected on an Irish team of five cattle that represented Ireland at a European Limousin Show in Paris winning her class at the show. She finished the year becoming Reserve Overall Champion at the National Limousin Show.

Michael Gunn, president, said: “The Irish Limousin Cattle Society is delighted to be able to honour a man who is held in such high esteem throughout the country, a man who lives and aspires to the highest principles, honest, modest and most importantly always a kind word for everyone he meets. Congratulations Paddy from all Limousin breeders.”