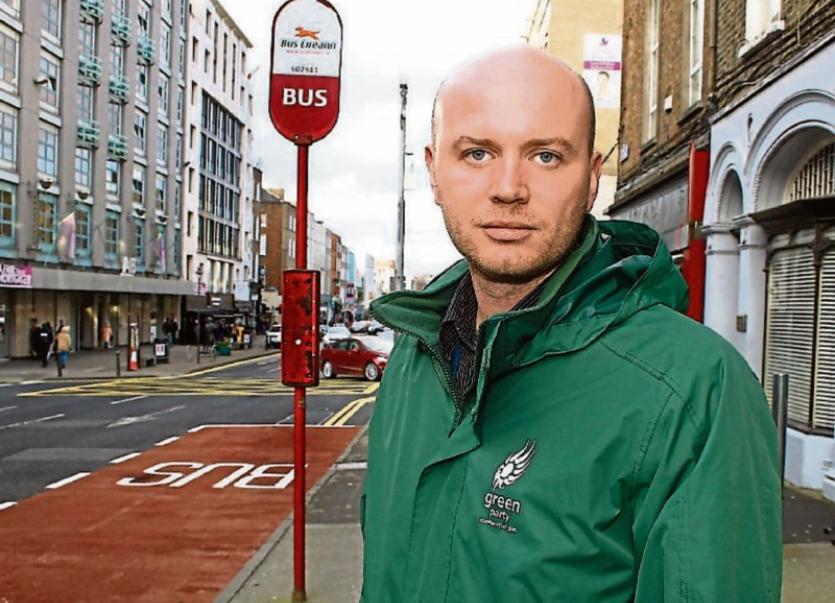 Breandan has identified improving our transport as Limerick's main challenge

A perfect weekend would start with a gig in Dolans or Pharmacia on Friday night. Saturday morning in the Milk Market - a crêpe from Bon Appétit for breakfast, a hot spiced apple juice from The Green Apron, and just chatting with everyone - it feels like the entire city passes through, it's the place for the weekly catch-up, and I love it. Browsing around town for the afternoon, maybe pick up a book in O'Mahony's, a hurling match in the Gaelic Grounds or a Munster game would be ideal, then catching up with friends over a few pints in the Commercial or JJ Bowles. A relaxed Sunday brunch in The Good Room in Adare followed by a nice walk somewhere like Curraghchase Forest Park would round it off beautifully.

Strictly speaking my first memory would be playing in softball (that's amateur baseball) tournaments in the summers in UL. My longest relationship also started here. But the one I'll tell you about is from when I applied for my current job at Mary Immaculate College. I haven't told this story to anyone in the college! I was working in England at the time, at a university in Liverpool. I was editing and rewriting the application up to the last minute. I really wanted the job, and I started panicking that the English postal service wouldn't get the application here on time. So I made a snap decision, walked downstairs, got in my car, and drove from Liverpool to Holyhead. I arrived about midnight, parked the car there, got on the next ferry overnight to Dublin, then a 6am green bus to Limerick, and delivered the application by hand. When I stepped off the coach in Arthur's Quay, it was a beautiful sunny morning. I walked through the park, up to the edge of the water, and the view of the river and castle was just beautiful. It felt like I'd come home for the first time. I ended up using the photo I took that morning on my election leaflets!

The Gaelic Grounds! I grew up in Belfast with the GAA - Saturdays playing for the club (Éire Óg Derriaghy, Dad was the club chairman for a bit), Sundays in Casement Park for Antrim matches, and of course the annual trips to Croke Park, starting when I was four years old. I still have all the old tickets, and my U12 and U14 medals. After years living in Britain, being able to go to the league and championship matches here regularly is pure heaven. You just can't beat a senior hurling Championship match, and we get the best here.

I love the water, so anywhere along the Shannon. I love walking along the boardwalk at Clancy Strand, and through the Westfield wetlands. The river path out past UL is so beautiful, and that's my daily commute on the bike when I'm working at UL. There's so much history there too - especially past UL, where you have the Black Castle, and the old iron bridge over the Mulcair. Or further out the coast, around Foynes, where you can imagine the flying boats landing.

There's a lot of resilience - there's no doubt Limerick has had some tough times, but people here seem determined to make the best of any situation, like there's never any question of giving up in the face of adversity. There's definitely a lot of passion - you can see that most clearly in sport and music, but there's people here who are passionate about everything from politics, the history and architecture of the city, the environment, farming and food, to the Makers night in the Fab Lab. I think that passion permeates almost everything in Limerick, and I've never really felt the same sense anywhere else. Of course a lot of that passion is directed at Limerick itself, there's a lot of pride in the city and county, and I think that's what leads to so many groups like Liveable Limerick, the cycle campaign, #FixLimerickBus, the Pedestrian Network, LAP, the Georgian Society, Thomond Historical Society, and to places like the People's Museum - people here want to celebrate the shared history and culture, and are passionate about making Limerick even better. And while it's a stereotypical Irish thing, I think Limerick really is such a welcoming place - it really didn't take me long to settle in after I'd moved here.

Oh, it's everything. I mean, you can see the passion most clearly on a Championship hurling or Munster Rugby weekend, but that's only when it's most visible, that passion is always there. You can see that in all the people coming out to help with the teams at U10, U12 and so on. And it extends to every sport. I swear, if you put a Chinese table tennis championship on the TV in a pub in Limerick, you'd have someone yelling from the back to turn it up.

Transport. The city's roads are full, there's just not enough space for everyone to drive to work. It's not just the city centre either, some evenings it can take nearly an hour to get off campus by car at UL. We shouldn't need to be spending hours every day just travelling to and from work. A car should not be a compulsory price of entrance to society.