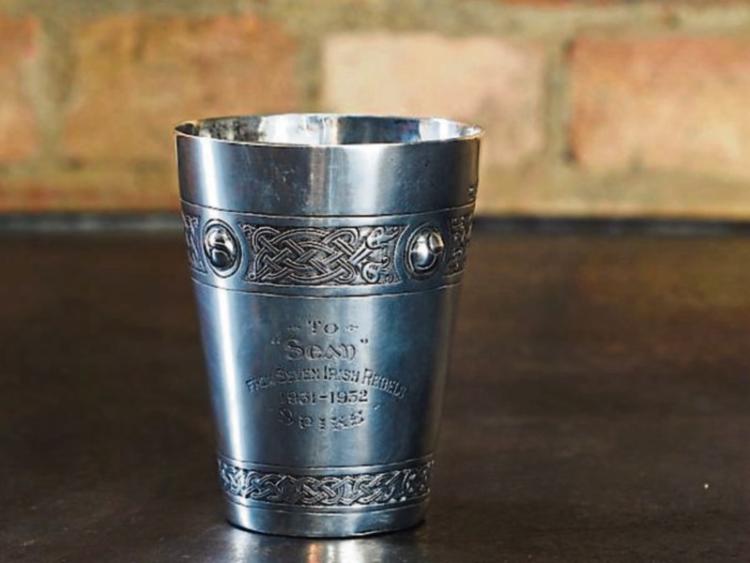 The beaker was bought by the Spike Island Development company; Sean had been interned at Spike Island prison in 1921

“TO Sean From Seven Irish Rebels 1931-1932, Spike” is the message carefully and painstakingly engraved on an intriguing silver beaker which was brought before auction earlier this week.

The four-inch (10.5cm) high presentation beaker worked with two bands of Celtic knot is made of solid silver and was made by William Egan & Sons.

It seems probable that the original recipient was Kilmallock-born Sean Moylan (1888-1957), a commandant of the Irish Republican Army turned politician and former inhabitant of Spike Island, where he was interned in 1921.

The item of silver was auctioned by English auctioneers Sworders Stansted on Monday. James Pickup, an auctioneer, and valuer with the company was delighted with the find.

“It is a really interesting piece. We got it off a private collector who had it for a number of years. It is not something you see every day. We are delighted to see it return back to Cork.”

John Crotty, Island manager at Spike Island, was delighted that it would be brought into the Spike Island exhibition.

“We are 95% sure that it belonged to Sean. We are reaching out to some of the family members of the other people whose names are on it, just to get that last 5%,” said Mr Crotty.

“It will go on pride of place in our display, alongside a number of diaries and books that belonged to some of the 1,200 prisoners that were held on the Island at the time,” he added.

Other signatures are believed to be those of James Crosbie, Seamus Collins, Alexander M Healy, DM O’Connor, and William A Mower.

Moylan was a former minister of agriculture and education, had proved himself an outstanding military leader during the Irish War of Independence of 1919-21, rising to the rank of Officer, Commanding the Cork No 2 Brigade of the IRA before his capture.

During this period Moylan lived in North Cork, however, his story began in Kilmallock where he was born and raised.

“There is a plaque on the wall of the house he was raised on Sheares Street. His mother was a Kilmallock woman and his uncles would have been local Fenians,” said Noel Collins, a local historian from Kilmallock