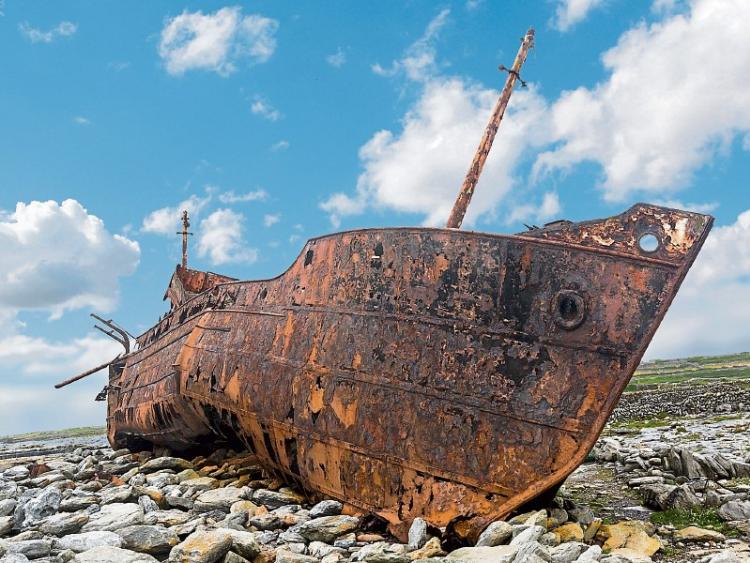 The shipwreck of the Plassy on Inis Oirr, one of the Aran Islands

IT is probably the best known shipwreck in Ireland, with strong Limerick connections, and now the Plassy, will feature in a new exhibition of paintings at the Hunt Museum

It was back in 1951 that the Limerick Steamship company bought the vessel and renamed it Plassy after the Plassey area of Limerick, with different spelling variations.

The boat went down in a storm in 1960 and it still lies on the shore of Inis Oirr, one of the Aran Islands and famously featured in the opening credits of the television comedy series, Fr Ted.

The boat operated around the coast of Ireland carrying general cargo until in got into difficulties off the Aran Islands in 1960. Thanks to the bravery of the islanders all crew were save.

This new exhibition at The Hunt Museum  features paintings by Hughie O’Donoghue, Time, Tide and the Memory of the House, take as their subject matter abandoned homes, situated in the landscape of Mayo where he spent much of his of his youth, and which has personal significance or resonance.  In this exhibition the artist looks at buildings as places of memory, using a semi abstract style combined with rich expressionist colours and texture.

The exhibition will feature paintings on wood panels, made in the manner of note book pages and incorporating drone photography of the buildings together with hand written notes, gleaned from the 1911 census, about the people who lived in these houses. It will also feature a group of oil paintings,.

In the Time and Tide series, O’Donoghue revisits Inis Oirr and the wreck of the naval trawler the Plassy. Here he has produced massive and dramatic pieces connected to the Plassy and this time the works are painted on tarpaulin.

He was born in 1953 in Manchester, England but his mother was born in the Gaeltacht of County Mayo in Ireland where O'Donoghue learnt traditional stories and experienced the landscape of the family home.